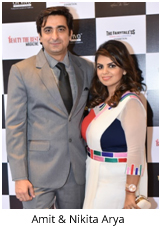 Women in Delhi are on a roll, as sundry awards continue to be given away in felicitation, even weeks after the Woman’s Day. Yet another award function was held on the 21st March, 2017 at Vivanta by Taj– Ambassador Hotel, New Delhi, hosted by Amit and Nikita Arya.

The prelude to the bestowment of trophies was a panel discussion on Woman Empowerment by H.E. Nejmeddine Lakhal, Ambassador of Tunisia, Shri Haroon Yusuf, Former Delhi State Minister, Dr. Janice Darbari, Head of Missions, Montenegro, followed by the Awards in the valedictory session by Bollywood Actress Divya Dutta.

Interestingly, one of the awardees in this Woman-Only category was Amit Talwar, a male cross dressing artist, whose claim to fame are the video clips of him as Sarla Penji. He got his award from Mrs Ratan Kaul, who was also the guest of honor.