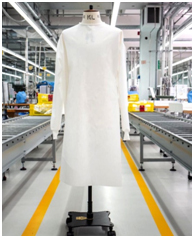 On 14th April 2020 the Zegna Group, which owns the leading global luxury menswear brand, announced that it has reopened its production facilities in Italy and Switzerland to manufacture 280,000 protective hospital suits for Piedmont Region and Canton Ticino, as part of the efforts to aid in the fight against the global COVID-19 crisis. Gildo Zegna, CEO of Ermenegildo Zegna said, “Let’s look out for each other. Let’s get through this together. These efforts will help provide urgently needed supplies to the Piedmont Region (250,000 units) and Canton Ticino (30,000 units), where we have converted a portion of our INCO plant in Novara and CONSITEX in Mendrisio to accommodate the suit production.”

This is a collective effort made possible by the collaboration between the Zegna Group, Fondazione Zegna, the Piedmont Region, Italy and Canton Ticino, Switzerland. The protective suits are constructed with a non-woven fabric, produced by PratriveroSpA in Biella, Italy.

The Zegna Group is incredibly pleased that the Biella textile district and Unione Industriale Biellese responded immediately to their appeal to work together during this difficult period. The Group is proactively collaborating with the Piedmont Crisis Unit and Canton Ticino relevant authority to speed up the production process in an effort to meet the pressing need for vital medical supplies.

The crisis we are all facing is a stark reminder that we must join together in every effort to combat the outbreak.

UNITED, WE WILL MAKE IT!