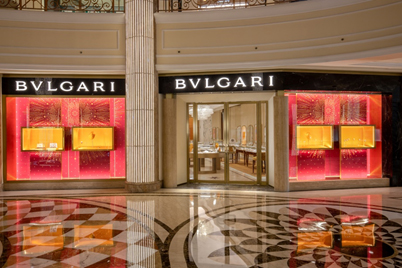 The Italian luxury brand Bulgari has opened its redesigned store at a new location in DLF Emporio Mall in New Delhi. The new design is inspired by the brand’s Roman and Grecian roots and cultural heritage. The store façade features a black Grand Antique marble portal, used in contrast with white Travertino Navona round columns at the entrance and earth tones inside. Bois Jourdan marble at the entrance threshold, apricot-colored furnishings and upholstery, crystal chandeliers flown in from Italy welcome visitors to a contemporary experience of both Bulgari and Italian heritage.

Linking the New Delhi boutique to all the other Bulgari boutiques around the globe, is the historic Via Condotti eight-pointed star.The star signifies balance, harmony and cosmic order and the eight lines represent the four cardinal points and time represented by the two solstices and two equinoxes. This red star first appeared in the historic Bvlgari Condotti store in Rome and now, it is found in all of its boutiques around the world. 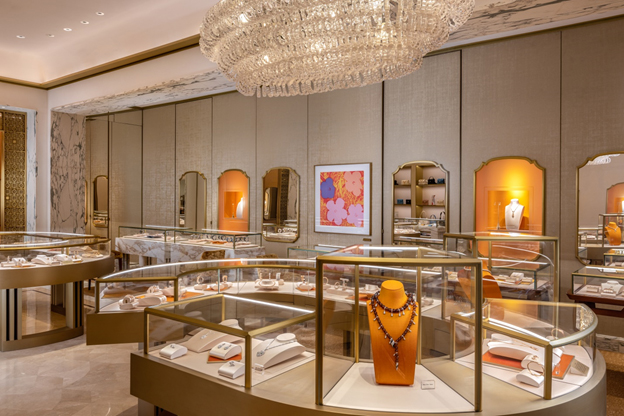 The store follows the concept and artistic direction of the celebrated American architect Peter Marino, who has partnered with Bulgari, among many other luxury brands, in reinterpreting the architectural and aesthetic heritage of ancient Rome into cutting-edge, contemporary design. 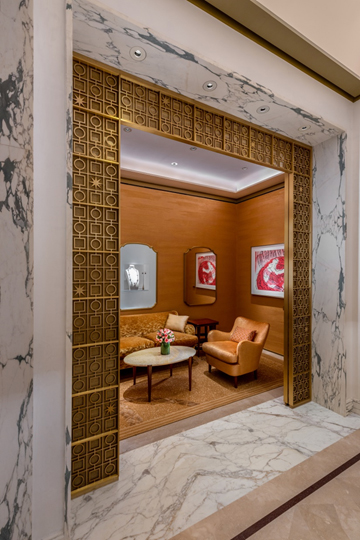 Marino’s touch can be seen too with the choices of furniture. Different pieces such as the Mangiarotti table, Oswaldo Borsani sofas, chairs or club chairs. An oval-shaped counter with light galvanized iron is inspired by the Italian architect Carlo Scarpa . At the very center of the store is a crystal chandelier.

At the rear end of the shop is a private sales room inspired by the days when Italy was at the pinnacle of the film era. In the 1950s and 1960s, many Hollywood stars came to Rome to make movies, and one of these were Elizabeth Taylor. It was during the epic, golden years of the Dolce Vita when she visited Via del Condotti while filming in Rome. She, among many other film goddesses, were Bulgari’s great inspiration for the VIP room concept, the jewelry and Peter Marino’s design. The sliding door to the VIC features a Roman geometric pattern that echoes in the bronze latticework of the Pantheon Mesh, drawing inspiration from the Roman Pantheon to complement the eight-pointed star. Not to be missed are the artworks by Andy Warhol.

Clients are invited to browse the boutique and explore its iconic collections such as the Serpenti Jewelry & Watches, B.zero1 collection inspired by Roman Colosseum, World Record Octo Watches in addition to dedicated areas for bridal jewelry, handbags etc.

India – Artisans of Kutch to showcase as

USA – Lavazza as Official Coffee of the