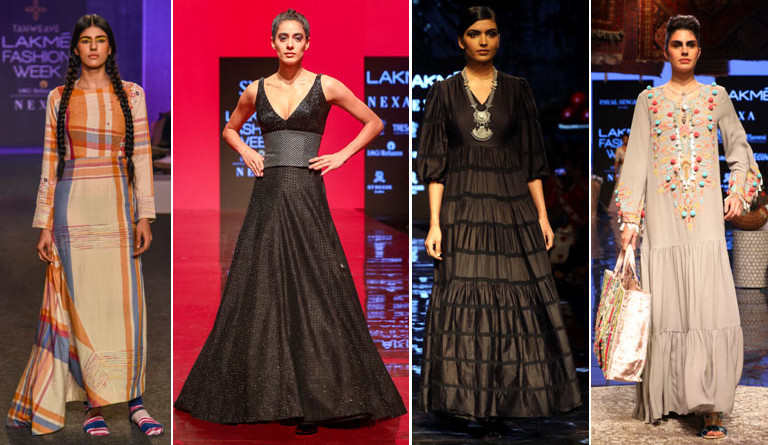 But mention the word ‘gowns’ in India and does it bring up images of Sita, Gita or Mita gliding in them on their wedding day? If that is unheard of think again, for the gown is now de rigueur in every bride’s trousseau as well as a ‘must have’ on the Red Carpet in India and abroad for Bollywood stars and celebrities.

During Lakmé Fashion Week Winter/Festive 2019 the gown was of prime importance among not only in the collections of western wear designers but even the hard core traditional bridal wear creators (who specialise in the Lehenga, Choli Dupatta trio), who showcased a couple of glamorous entries that thrilled the audience. The gown was not only displayed in the popular ball gown version with crinolines and bare shoulders but was offered in a variety of options to suit the most fastidious dressers who could be demure or daring depending on their moods and personalities. 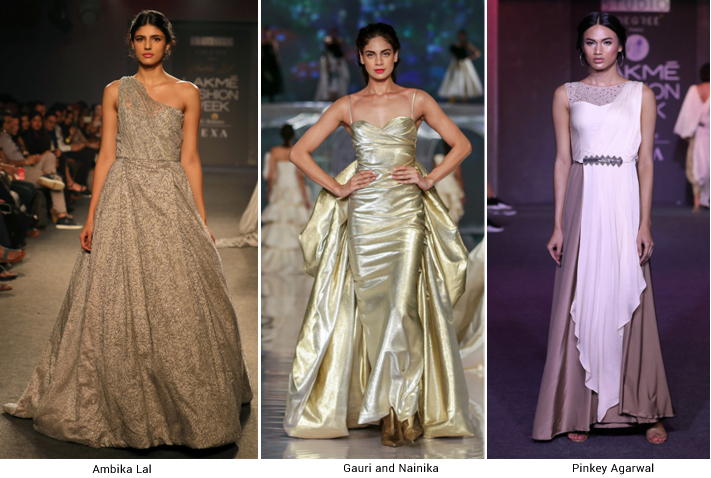 Nothing looks more glamorous than a draped and rouched gown. Designer Ambika Lal had one in a one-shoulder silhouette with discreet geometric glitter. Designing duo Gauri and Nainika for their Grand Finale collection brought in a body-hugging gold one with spaghetti straps and a giant rouched back trail. Pinkey Agarwal’s almost toga like gown was a white and beige fluid draped offering while another one was more Grecian in the same colour blocking pattern. 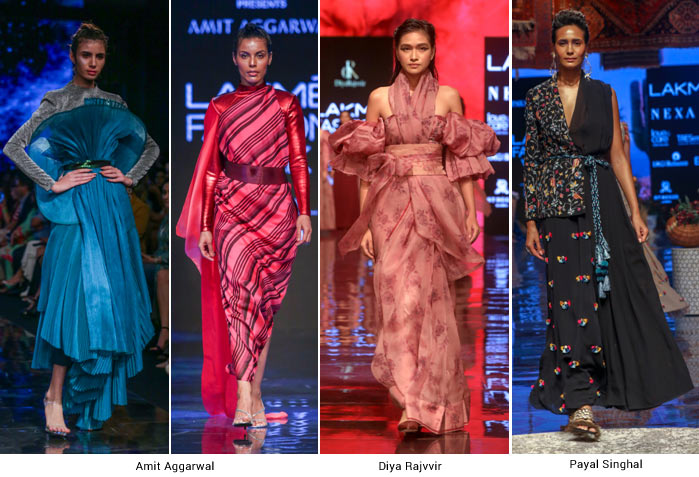 The gown has taken a New Age avatar and who better to create it than the Master of extreme detailing Amit Aggarwal who unveiled a show stopping entry in silver jersey and electric blue plissé all belted with a shimmering cummerbund. Another one of his options was a diagonal, stripped, fuchsia story over a shocking pink long-sleeved blouse with a shoulder trail. Diya Rajvvir created a blend of drapes and silhouette for the rose, printed, mauve gown, while Payal Singhal offered her idea of a gown with a pre-stitched embroidered half long-sleeved jacket teamed with a black floor-length maxi. 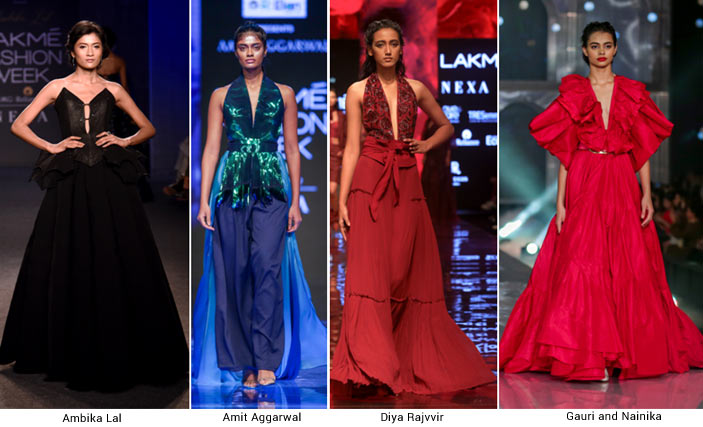 One of the most important details of a gown is its neckline, which could make or break the beauty of this ensemble. Therefore the plunging neckline is the most favoured by designers. Ambika Lal’s black, peplum, corset gown’s neckline nearly plunged to the navel, while Amit Aggarwal’s shimmering green one did move seductively downwards. Diya Rajvvir’s Marsala version with an embroidered halter bodice was with a ‘V’ neckline that kissed the navel and so did Gauri and Nainika’s flouncy, shocking, pink, gypsy inspired one. 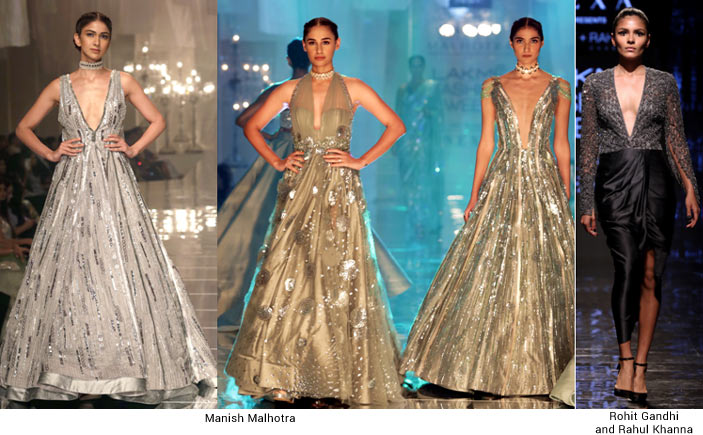 Manish Malhotra’s deep ‘V’ necklines moved from wide to narrow, while Rohit Gandhi and Rahul Khanna turned their gunmetal, silver, long-sleeved, bodice into a colour blocked offering with black satin or as a jacket that followed the look. 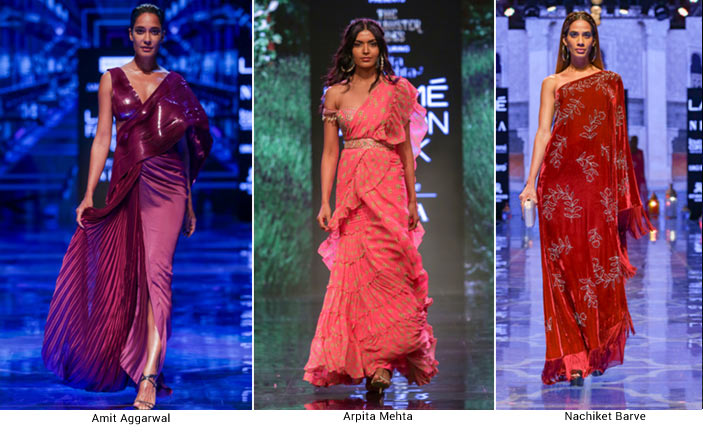 Indian designers offered an interesting version of the gown to the western dressers. It was the Desi alternative of the ball gown that skilfully married the beauty of the floor-kissing creation with the drapes of the 6-yard wonder – India’s traditional sari.

Amit Aggarwal’s offering with the micro pleats and the shoulder drape was a great Indo-west version. Arpita Mehta combined a frothy, tiered, frilly one with a one-shoulder drape over a corset bodice, while Nachiket Barve thought that the one-shoulder, long, toga style kaftan with the fringed edges was perfect. 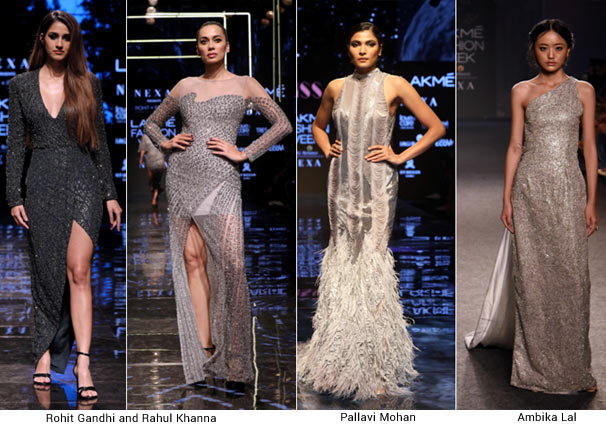 Shimmer and shine go very well with slinky and sexy and that is how Rohit Gandhi and Rahul Khanna dreamt up their gowns, both with demure, long, sleeves but with sexy, high, slits, deep necklines or illusion shoulder interest. Pallavi Mohan’s 70’s feathery, beaded version was form- fitting and caressed the curves of the wearer; while Ambika Lal’s one-shoulder, wonder in silver with a trail was a body- con look. 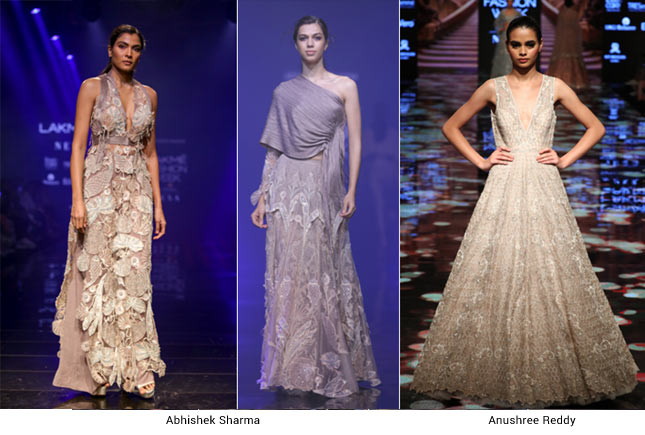 Sheer, soft and feminine the net or tulle is the most popular material for a gown and Abhishek Sharma used it lavishly for his one-shoulder wonders with gorgeous 3D appliqués in delicate pastel hues. Designer Anushree Reddy, a Lehenga, Choli and Dupatta bridal wear expert, sneaked in an ivory tulle gown in her collection and gave her brides a wide choice and also hoped to cater to a larger buyer profile. 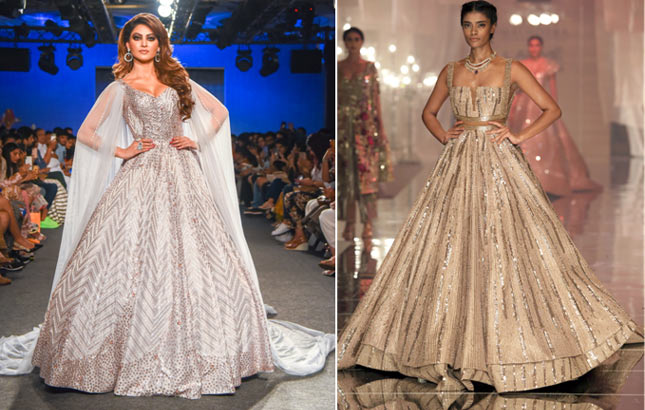 The Victorian version of the gown has suddenly moved up the fashion charts for most designers and with the crinoline under the ensembles it is a look Cinderella would have gladly scrubbed floors and washed dishes for. Pink Peacock Couture’s gown was complete with sheer floor sweeping, shoulder trails. Manish Malhotra presented a majestic regal look. 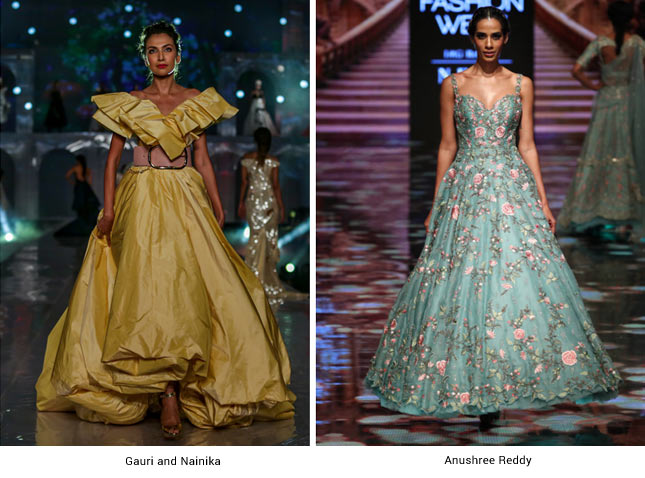 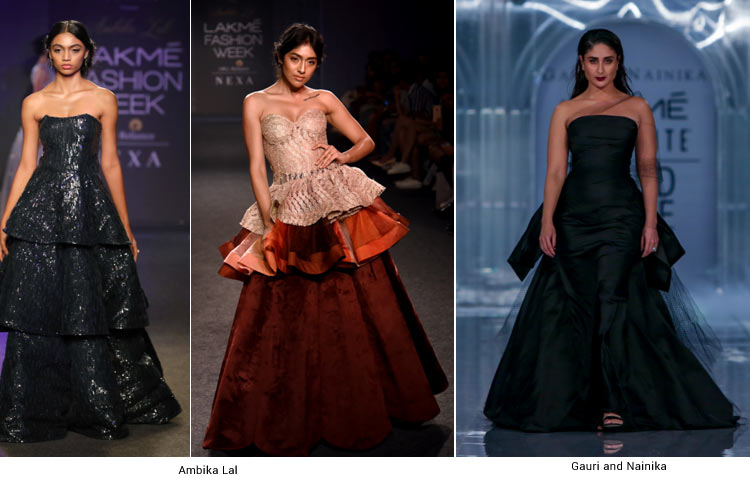 Nothing looks more tantalising than a will-power gown. It is the ultimate offering in the world of fashion and the most desired by women when they want to make a showstopping dramatic entry. Ambika Lal’s glittering black-tiered, layered, version was for drama after dark, but her other option was a 3-toned graduating peplum corset offering in shades of rust. 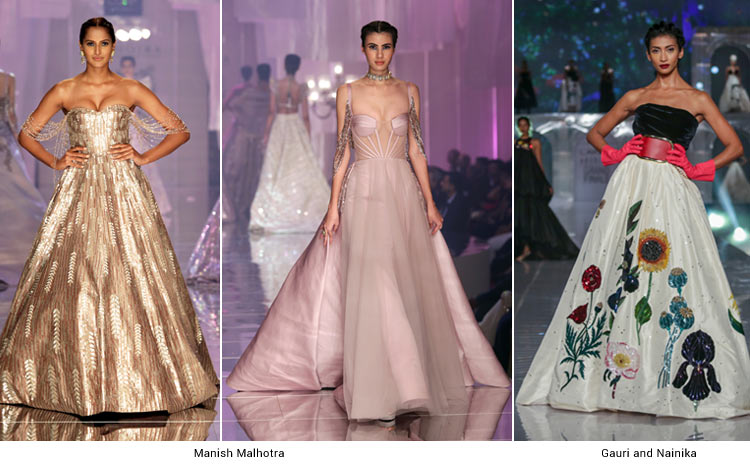 Manish Malhotra’s golden creation with draped, beaded, shoulder, strands or the form-fitted, boned, corset gown in nude tones with a grand trail was a striking version. Gauri and Nainika too had the all-black, seductive gown or a black will powered bodice with a white wildly, embellished, abstract, flower, motifs for the long skirt. 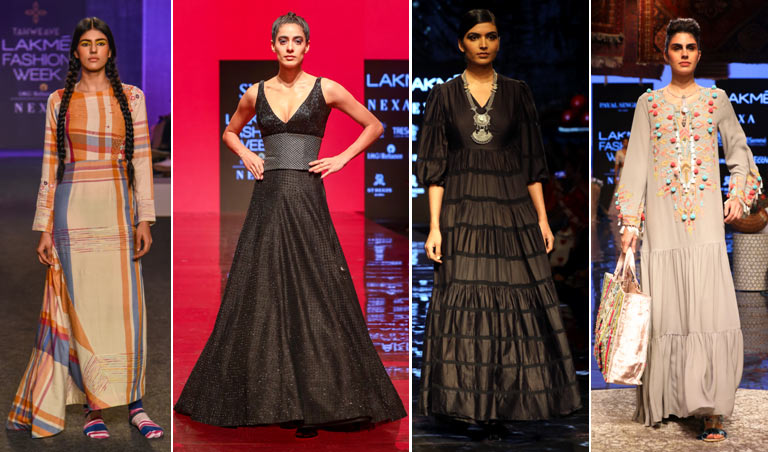 The traditional gown or maxi as it is often called, has always worked well for some semi-formal as well as formal occasions. Tahweave’s giant, multi-checked, long-sleeved maxi was ideal for morning brunch when the mercury is high. SVA brought in a simple basic black ‘V’ neckline, gown with a wide cummerbund. Saaksha and Kinni’s wildly, printed, geometric look was inspired by the Gujarat and Rajasthani motifs but Rara Avis felt that a black, 10-tiered, empire-line maxi with balloon sleeves would appeal to multiple buyers for its practical look. Payal Singhal played it safe with a long, tiered, tube embellished with multi-coloured tassels; while Nachiket Barve showcased a long-sleeved, black, velvet gown with leaf embroidery that could be a perennial favourite. 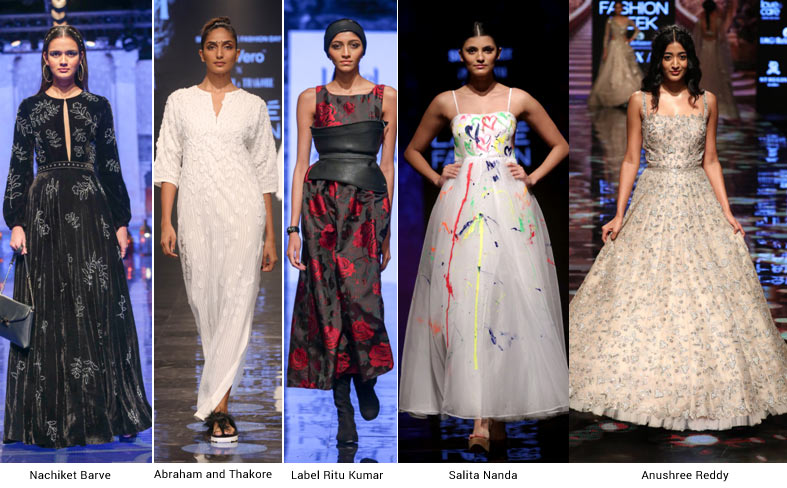