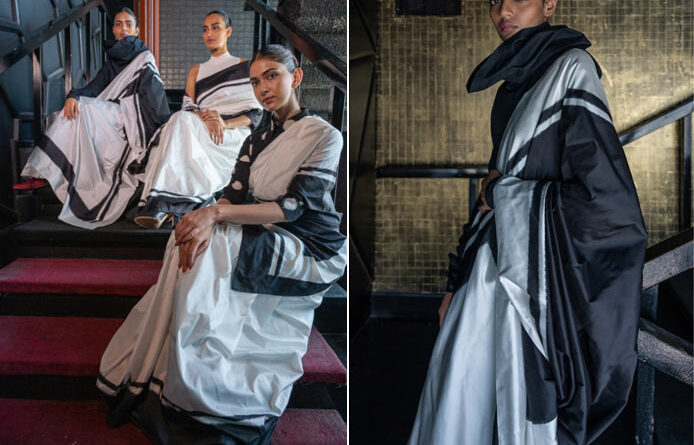 The man who introduced the Designer Sari under his namesake label back in the 80’s, Satya Paul breathed his last on 6th January 2021. The Satya Paul label was a regular at Fashion Weeks in Delhi and Mumbai. Meher Castelino reminisces about the journey of the label and her meetings with the man himself. 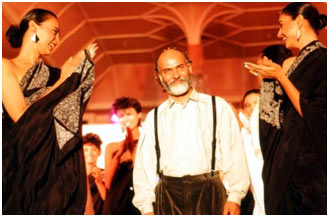 The name Satya Paul resonates immediately with the traditional Indian drape – the sari and his designs have been the prized possessions and ‘must have’ for lovers of the 6- yard wonder.

In 1989 the Satya Paul brand was sold in 12 cities, as well as licensed in Japan. In the same year Satya Paul launched neckties and franchised them in 1993. The label sold in duty free shops in seven countries around the world as well as in Italy, France Germany, Dubai and the neckwear in 37 cities.

My meeting with Satya Paul was soon after his exclusive show at the Interplaza in Mumbai in February 1991. It was a delightful interaction with the very, soft spoken and artistic Satya Paul, whose gentle demeanour matched his perfectly groomed beard and sparkling eyes. 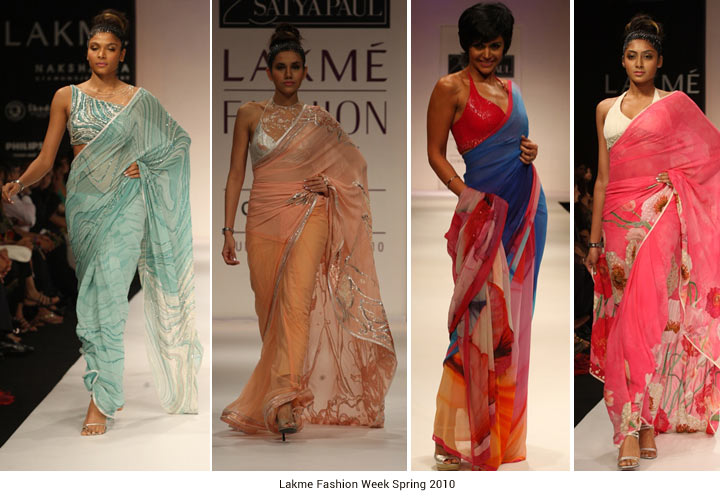 He informed that his love for the sari started very early in life in 1965 when he opened a textile store in Delhi. Born in Layyah Pakistan, his first Indian sari boutique called L’Affaire was started in 1980 and in 1986 he launched his brand with his son Puneet Nanda and presented four collections per season, thus turning the sari into a seasonal line of designs just like it was for western garments abroad. Soon it was fabulous shows all over India from 1987 and the opening of several sari boutiques in the country and globally.

Our chat after his show at Interplaza revealed his designing dictates and thinking process. He described his saris as, “My inspirations are from life and the whole beautiful world around us.” 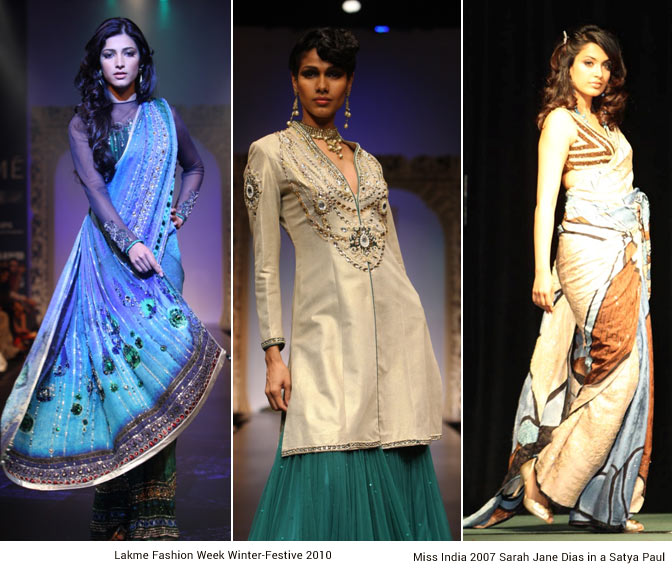 Research was always an important part of Paul’s designing background as he worked in his Salon in Delhi. The S Paul Salon and L’Affaire in Delhi were the exclusive outlets for his range of saris like the “Signature Series”, which was a high fashion range. He explained about his work when he stated. “From thorough historical research to the elements like trees, birds, rain, music, paintings, sculpture and existence itself is what I work with. I seek a new sophistication, a harmony and refinement in the art of living.” 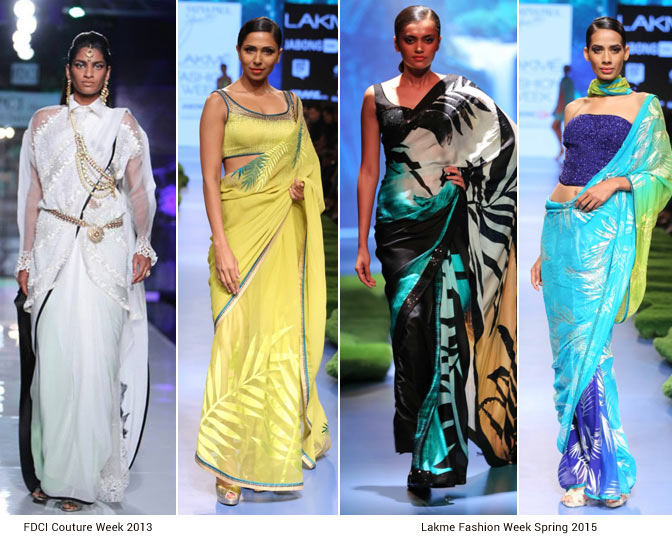 At the show when Satya Paul presented his “Signature Series” it revealed his artistic expression for unique saris. The “Signature Series” captured his vision in colours as well as in designs. His other line called the “Museum Piece Collection” paid attention to details as the saris were created by the country’s top weavers, block makers and printers.

For the “Avant Garde” line, Paul said, “The range is the beginning of haute couture saris in India.” It was his experiments with the sari that broke all rules. For “The Renaissance” line Paul was inspired by the rich traditions of the country. “It is an update of designs and colour schemes that project new sophistication,” he revealed.

Paul’s love for fabrics was quite constant when he selected chiffon, crêpe-de-chine, silk and silk jacquard, which was reprinted. His saris at the show were priced at Rs 850 to 7000 for the embellished ones. Colours have always played an important role for Paul who worked around muted tones of beige, maroon, mid night blue, or just neutral black and white. He was also partial to red, vibrant turquoise and electrifying green.

At the Interplaza outlet, which was the exclusive, one in Mumbai for Satya Paul saris; new designs comprising 50-55 saris were received every two weeks in an exclusive one-colour offering.

Concluding the interview Satya Paul spoke about his saris with great affection, “These are real clothing for the individual, intelligent, beautiful, sensitive and designing women of today.” 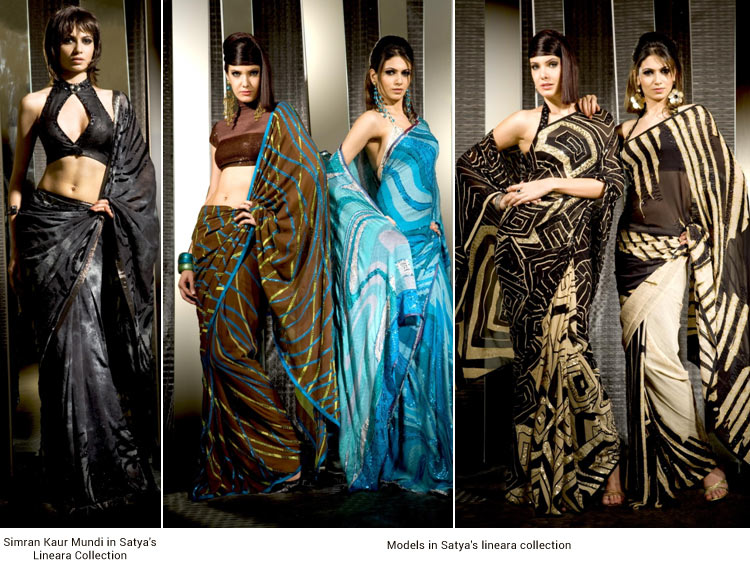 In 1998 Genesis Colors Pvt Ltd took over the Satya Paul brand but Satya Paul continued to design till 2001 after which Puneet Nanda took over the designing.  But Satya the eternal designer was still designing for the Paul Salon, which was exclusively served high-end home furnishing international markets till 2014. 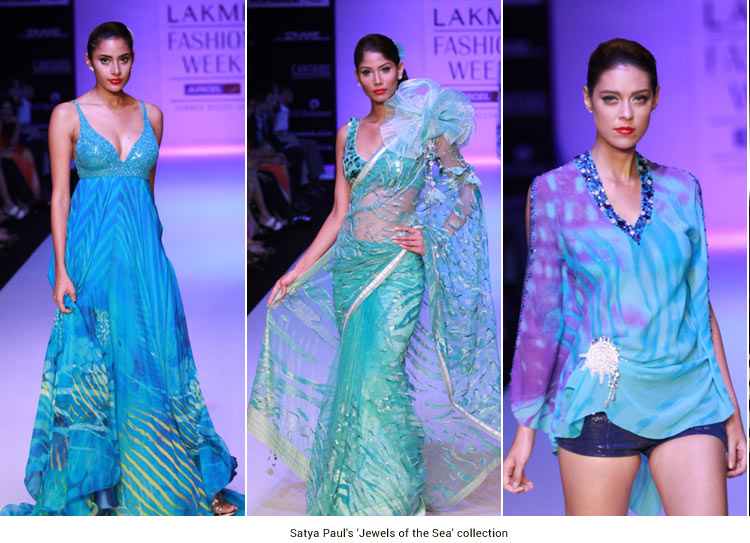 In 2001 Satya Paul label designed by Puneet brought in a Diffusion line and launched the Pret-a-porter label “U by Satya Paul” that included traditional Indian fusion and western wear but with a twist. So there were blouses with churidars or a jacket with salwars and more interesting fusion offerings. 2002 was a big year for the label with stores in nine Indian cities. Puneet who grew up breathing and creating designs with his father had ambitious plans for the 21st century.

For Fall/Winter 2002-2003 Puneet offered an ornate floral line of saris, salwar suits, scarves, stoles ready-to-wear western garments, bags and accessories. The look was both Indian and western in nature.  In 2003 Puneet also visualised and unveiled the tribute to Raja Ravi Varma and the Satya Paul x Raza collections. In 2009 it was the “Lineara Collection” and in 2010 the “Zen, Zest, Zip Zap and Zing” line of creations followed. “The Bridal Tarot Collection” had all the glitz and glamour of the brand; while “The Jewels of the Sea Range” in 2011 was a grand mix of saris lehengas and western ensembles.

Punit Nanda designed various collections for the brand and took part in numerous fashion weeks in India till he exited the company in 2010. 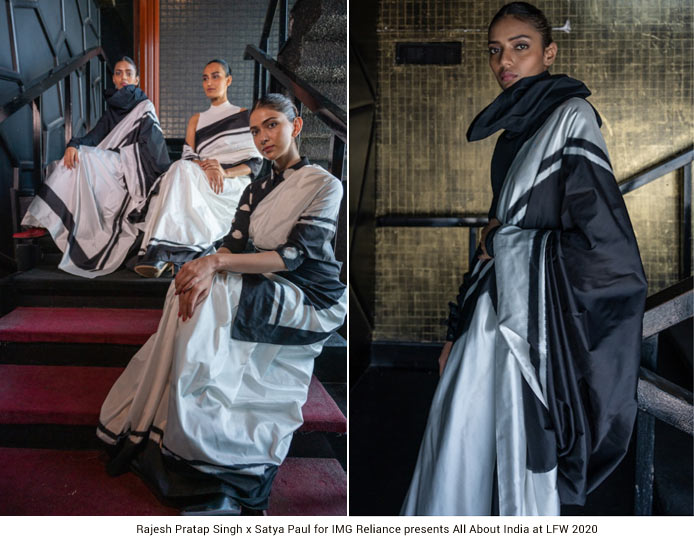 Masaba Gupta was entrusted with the assignment of designing collections from 2012 to 2014, which she did for the Wills India Fashion Week Autumn/Winter 2013 season and the FDCI Couture Week 2013. 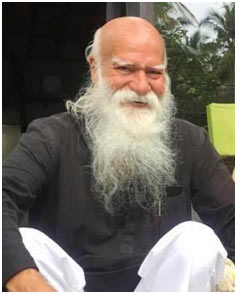 30 years of Satya Paul was celebrated with “A Tropical Wonder” line when Gauri Khan presented her debut collection for the brand in 2015.

With the Satya Paul’s label under Genesis Colors Pvt Ltd now with the Reliance Brands Ltd umbrella since 2018, there was a change in Creative Directors.  Rajesh Pratap Singh the latest Creative Director appointed in 2020, showed his collection at Lakmé Fashion Week 2020 Digital First Season Fluid Edition in October 2020.

Satya Paul’s personality always was as prominent as his creative designing prowess. There was that ethereal, aura about him that was evident in his serene peaceful appearance. Little wonder then that in 2015 he shut Paul Salon the parent company that exported fabrics abroad and entered the Isha Yoga Centre in Coimbatore to spend his last years in tranquil beauty, till he passed away on January 6, 2021 at age 79.