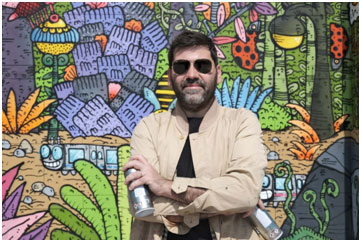 As part of the celebrations of India’s 75th Independence anniversary in 2022, the Embassy of France/French Institute in India envisioned a unique cultural project in collaboration with India’s Ministry of External Affairs (MEA) and Government of India’s ‘AzadiKaAmritMahotsav’ or AKAM initiative to celebrate 75 years of India and its people, history, and accomplishments. For the AKAM week celebrations, the French Institute in India invited the renowned French artist Mr. Poes to exclusively paint murals in the iconic cultural hub of Delhi – Mandi House. The space for painting the two murals at Mandi House Metro station has been graciously provided to Mr. Poes by Delhi Metro Rail Corporation.

Through this special collaboration, Mr. Poes will honor the enduring friendship between India and France with a vibrant French garden cohabited by myriad creatures, and featuring Delhi’s emblematic buildings. The French garden, also called “jardin à la française” (literally, “garden in the French style”), is based on symmetry and the principle of imposing order on nature. Mr. Poes will offer this special universe of his own to India with a dynamic perspective.

Mr. Poes started painting at Mandi House Metro Station on 15th February. His creation are presented on the walls next to exit gate numbers 3 and 4. The official inauguration took place on 26th February in the presence of both French and Indian officials. Ms. MeenakshiLekhi, Hon’ble Minister of State for External Affairs & Culture was hosted by Ms. Dana Purcarescu, Chargéed’Affairesai, Embassy of France in India. Along with the unveiling of the fresco, the inauguration was accompanied by small performances by artists from Delhi.

This mural is the first among the many cultural events throughout India from March to May for celebrating Indo-French friendship in the year marking the 75th anniversary of India’s Independence and the establishment of diplomatic relations between France and India. 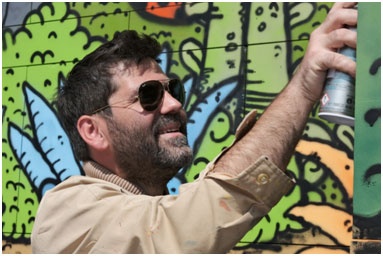 Fabien François Thomas aka Mr. Poes, 39, lives in Lyon. Poes started tagging in 1998 when still in high school. He was brought up in hip-hop culture, his childhood filled by comics and manga heroes. His relentless activity as a diehard graffiti artist had him travelling Europe, from Oslo to Istanbul and from Berlin to Belgrade. Poes seeks to develop a world where dreams are predominant, using derision, humour and irony to turn his paintings into poetic odes and fantastic stories, reflections of a dreamed society.

ABOUT STREET ART PAINTING IN FRANCE

While graffiti in New York gained shape and meaning in the late 70s, Paris had already moved into a distinct street art since the 60s with the activities of avant-garde artists, Nouveau Realists, and among publicly aware conceptualists: stencils, posters and murals appeared around the French capital, announcing a novel understanding of art in public space, introducing various techniques in addition to the preferred New Yorker aerosol. French street art was growing on the country’s artistic heritage, incorporating poster wheat pasting, stencilling and other innovative expressions that did not revolve around lettering alone. Nowadays, everywhere in France there is an explosion of street art, also known as post-graffiti. France became home to some fantastic street art and graffiti works: advertisements, films, books, exhibitions, luxury goods and showroom decoration…

ABOUT FRENCH INSTITUTE IN INDIA (IFI)

The French Institute in India (IFI) is the educational, scientific and cultural department of the Embassy of France in India. It facilitates academic and scientific exchanges between higher institutes of learning and research, enables student mobility, and promotes the French language, and artistic and cultural partnerships. Cooperation between India and France takes place through a number of sectors: Arts & Culture, Books, Ideas, French Language & Education, the Study in France programme, Academic Partnerships, Science Technology, as well as Innovation and Multimedia. www.ifindia.in

Italy – ‘Beauty Made in Italy’ digital

India – Jaipur Literature Festival 2022 to be