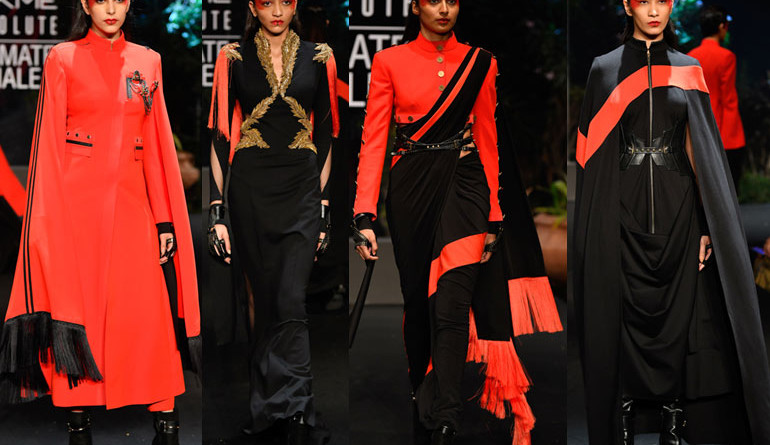 At every fashion week there are some designers who create memorable collections that stand out amongst a plethora of names while others just get pushed in the background of oblivion. At Lakmé Fashion Week Summer/Resort 2019 held in Mumbai from January 30 to Feb 3, 2019 at Jio Garden there were designers who struck all the right chords to create a fashion symphony but others made a tuneless sound. 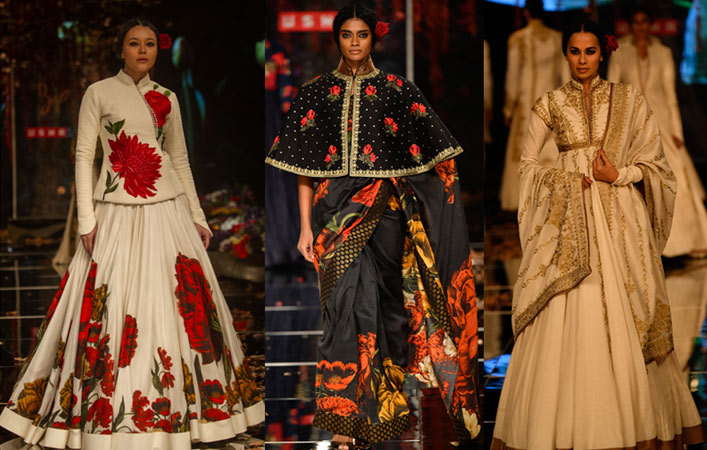 Rohit Bal’s silhouettes may not have changed since the past two decades, but when it comes to visualising embellishments and presenting them in the right proportions, he is the Master of the Genre. His “Guldastah” collection was an ode to Kashmiri craft. The poppies, peonies, tulips and sunflowers that blossomed on the garments turned the line not only into a memorable experience for the audience but works of art 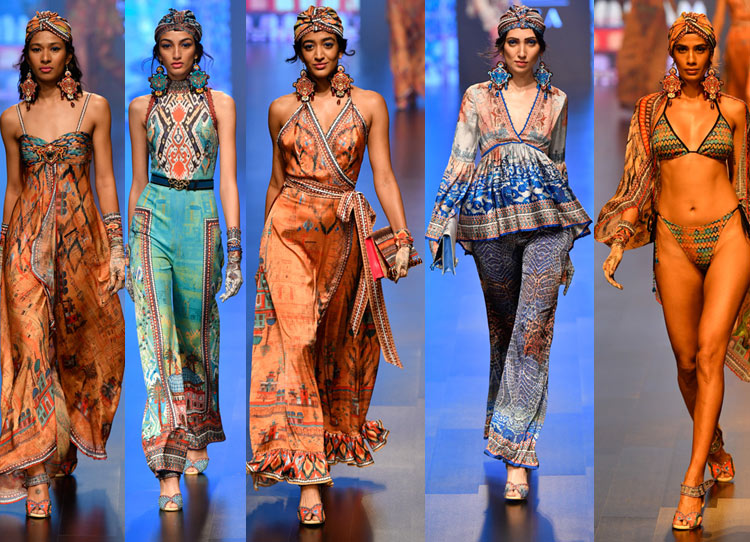 When a designer is thrown in the midst of seasoned stalwarts, he has to come out all guns blazing to make an impression on the ramp. That is exactly what Rajdeep Ranawat did with his collection called “Istanbul” that was a print explosion on the catwalk with resort and holiday wear along with perfect footwear, handbags and accessories. The garments had immense mix and match possibilities that left a mark on the audience. 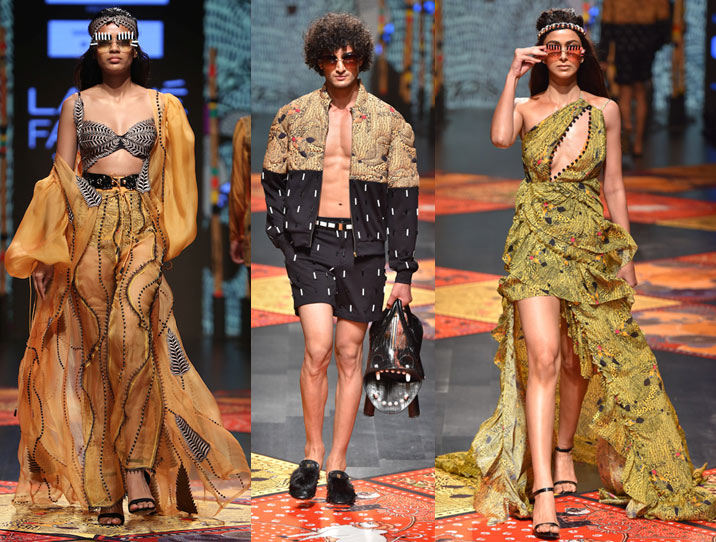 Here is a designing duo that researches the print story from scratch. This season Shivan & Narresh were inspired by Bengal’s Kalighat Pattachitra art and the Tholu Bommalata leather puppetry of Andhra Pradesh for their collection “Pattu Series”. The images were not only translated on the fabrics in a colourful fantasy but also on the eyewear and hair ornaments. It was a vibrant beach, holiday and trousseau collection that will not only thrill Indian buyers but the international dressers. 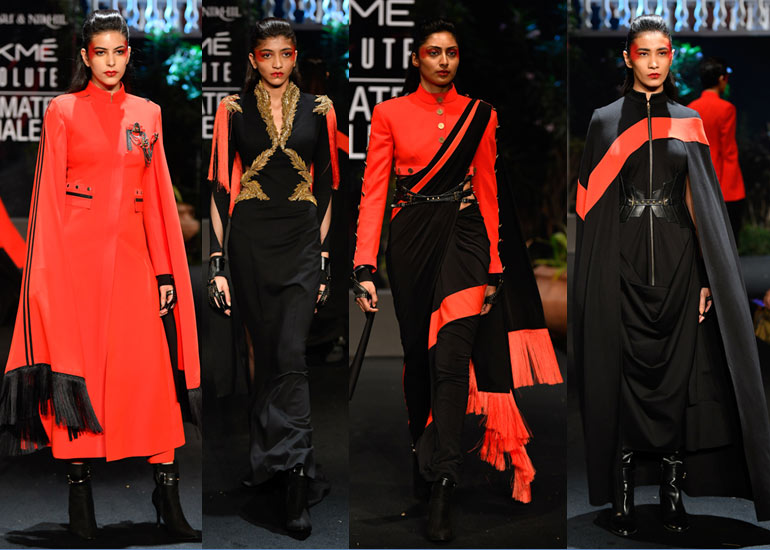 Known for their adventurous, unconventional construction with a marked androgynous flavour, Shantanu and Nikhil’s “The Recruit” Grand Finale collection in red, black and gold matched the Lakmé Absolute latest colours and was not only dramatic and jaw dropping in presentation (it was against the heritage backdrop of the Sophia College) but the extreme construction and sharp tailoring left a lasting impression. The traces of regimental and military touches were imaginatively merged with the contemporary drapes and styles of the New Millennium. 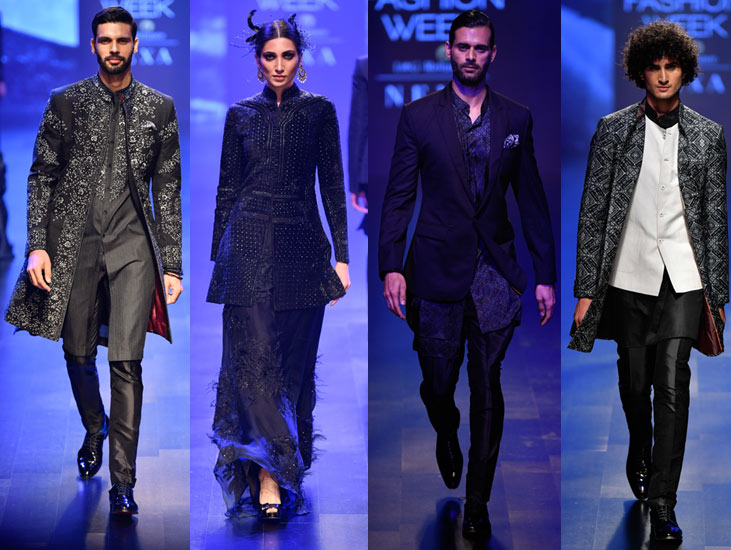 To Raghavendra Rathore goes the credit of uplifting the traditional Bandhgala or Jodhpuri jacket to an haute couture level for the past several decades and this season too his “An Ode to the Bandhgala” was an all-black orchestra of the traditional Indian jackets designed for men and women. Keeping the collection classic, with tonal beadwork that gently shimmered and sparkled on the runway with quiet sophistication, Raghavendra proved that the bandhgala could be a truly grand alternative to the tuxedo jacket when created with deep emotional passion. 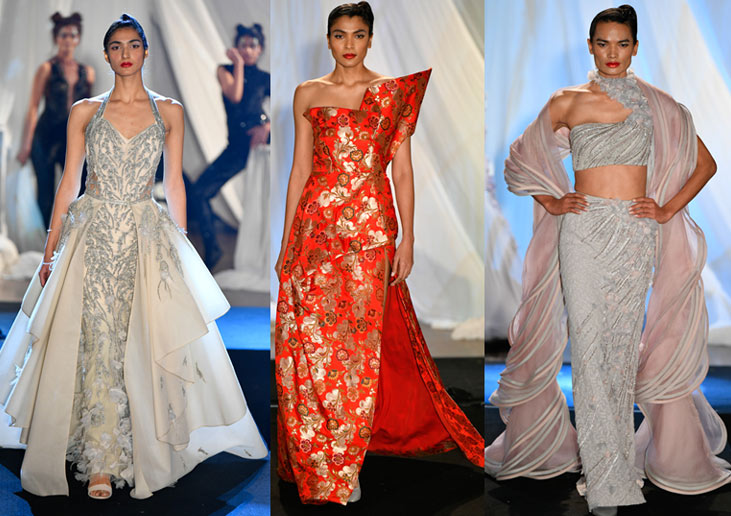 Not only is a Gaurav Gupta show presentation mind-blowing (a spiral staircase for the models and a monologue by a lady perched high near the ceiling), but his creations are unbelievable in their construction, sharp tailoring and fine finish. The “Unfolding” was Gaurav’s masterly offering in origami with moulding, wiring, draping and rouching as the focal point. The magnificence of the garments was further enhanced with Gaurav adding Chikankari and Benaras brocade for the first time that left a memorable impact. Here was a truly Red Carpet worthy line that can float in during Bollywood or Hollywood premiere nights. 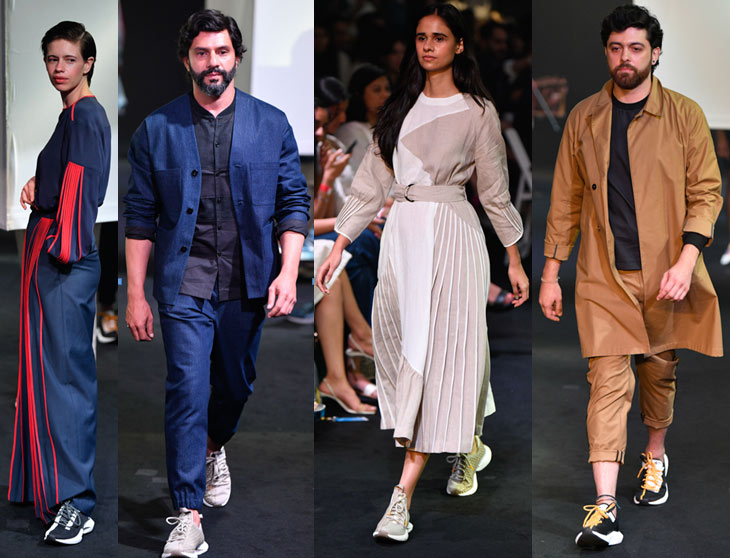 International award winning designer, Ruchika Sachdeva won the International Woolmark Company 2018 women’s wear award and was listed in the top 500 designers by Business of Fashion. Her label “Bodice Studio” for women and the launch of the “Bodice Men” brand needed more attention at Lakmé Fashion Week Summer/Resort 2019 (it was under the shadow of the Reebok Sole Fury brand show) so that her unbelievable construction of the flowing, piped, pleating techniques for the garments could be studied with care and appreciated for its minute detailing. Simple, elegant memorable, the collection’s masterly construction was truly noteworthy. 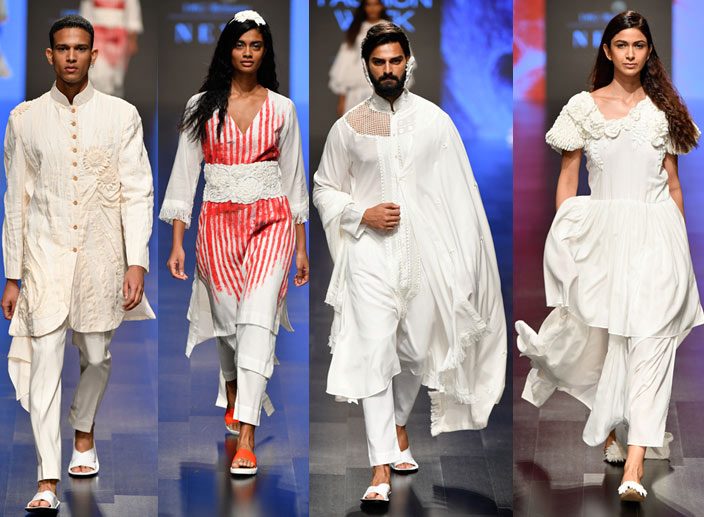 A relatively new name on the fashion week circuit he was in the Lakmé Fashion Week Summer/Resort 2018 show but made a great impact from his first appearance. This season Mohammed Mazhar’s “Kadhai Wala” collection was a tribute to his creative prints, which he painstakingly dreamt up. Surface texturing is his specialty and his garments for men and women were in perfect sync with subtle but impressive ornamentation combining style with construction, large doses of practicality, wearability and commercial viability. Mohammed once again had a winning line for which he paid tribute to the craftsmen by bringing them on the ramp. 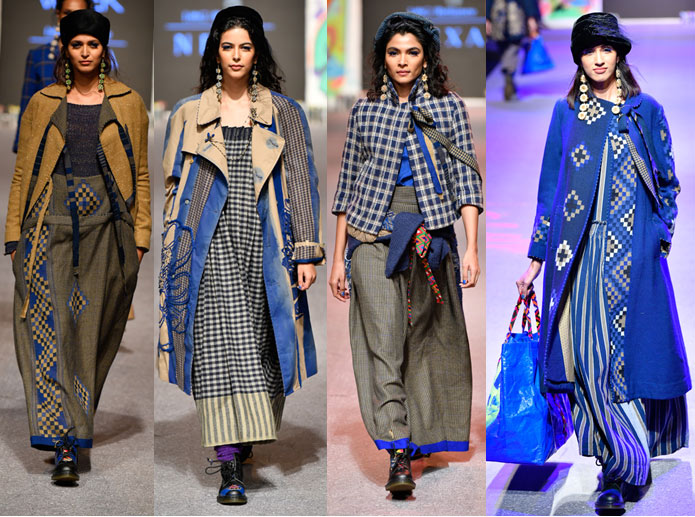 Aneeth Arora’s label Péro has been in the forefront of fashion in India and abroad for decades. Her collaboration with The Woolmark Company and the Bhuttico weavers from Himachal Pradesh resulted in a fabulous Autumn/Winter 2019 collection of grand woollen garments made from Merino wool. The motifs, colours, designing and weaves came together seamlessly for a line that not only had immense mix and match possibilities but had a timeless heritage-like quality that will be valued by connoisseurs of fashion. 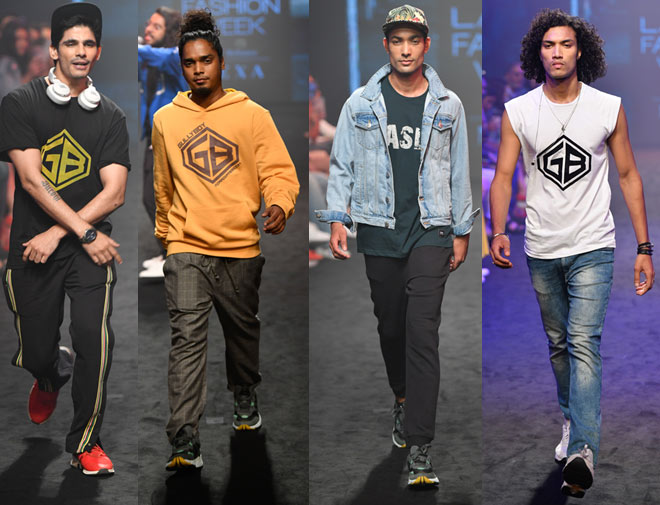 When a collection depends on the release of a forth-coming movie with the hottest Bollywood star on the ramp it was obvious that the garments will be over-shadowed by the tamasha on the ramp. But by even adding quirky slogans on T-shirts, hoodies and biker’s jackets were they great creative offerings? The show definitely garnered tremendous eyeballs with rappers making a lot of noise and the live wire Ranveer Singh star of “Gully Boy” creating pandemonium at the show. “LoveGen”, the label by Bhavana Pandey, Dolly Sadhwani and Nandita Mahtani got the publicity for the Gully Gen show and so did the movie and the star but the garments that resembled and were similar to export surplus can be bought on Fashion Street at budget prices. 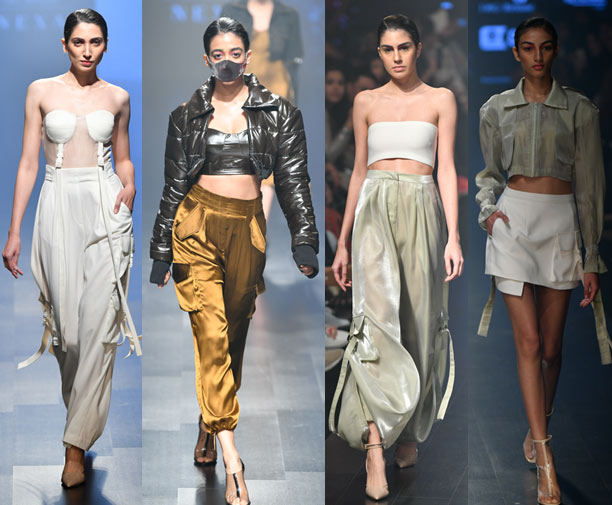 Here is a label by Sahib Dang and Sunayana that showed at the Delhi Fashion week and now at Lakmé Fashion Week Summer/Resort 2019. The line made an emotional statement of using hemp and Dabka embroidery (to appeal to the sentiments of the sustainable fashion lovers) but the collection was a disjointed jumble of styles and designs that had neither colour, fabric, theme nor detailing linking them together. The random pieces that appeared on the ramp – one with a pollution mask as an accessory – needed a definite creative rethink. The title “Why So Offended” maybe striking, but had no connection with the clothes on the ramp unless if it was a query for the audience! 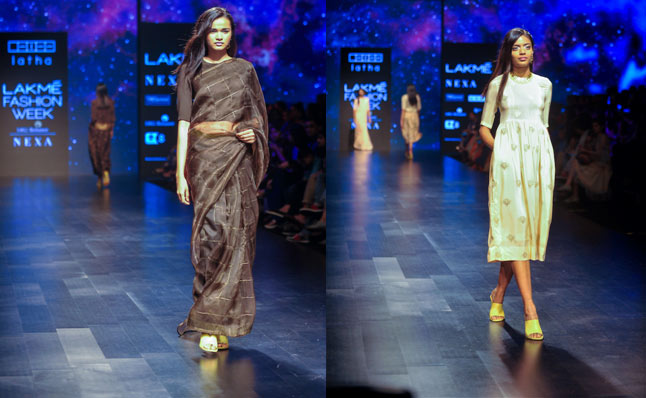 The designer had her heart in the right place when it came to fashion. She wanted to merge the beauty of South Indian culture with modern silhouettes for her ‘Wonder Years” collection but the result was a mish-mash of mediocre designs interspersed with few saris that did not make an impact.

The designer is known for his sari weaves and his “Shaahana” line had all the beauty of the 6-yard drape. But a cleverly worded PR push does not make a range memorable; neither do a few badly tailored garments from lovely brocade fabrics. Even a dance performance or the lovely showstopper Aditi Rao Hydari could not lift the show to great heights. What was needed – a strong theme for the saris, which have a firm story, about the colours, designs and the weaves. Presenting saris is a great idea, since one can never go wrong as the drape is beloved of all but maybe the presentation needed deeper thought when it came to tailored garments. 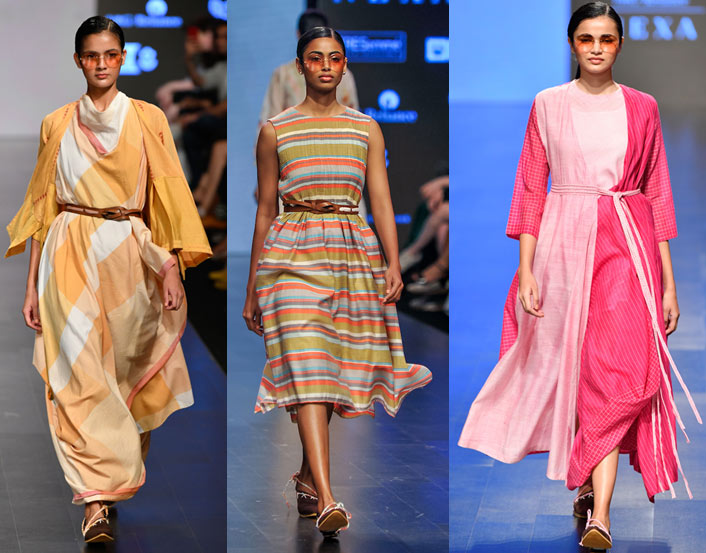 Last season “Tahweave” by Sweta Tantia, known for its weaves, struck the right notes. This season although the line had the iconic art of ikat as well as the Floral and monumental details from French memorials as inspiration, the impact was rather weak. Tailoring and finishing of the garments needed attention, while the mix of silhouettes made a jarring impact on the ramp. A draped midi, another basic dress, 3-piece ensembles and random printed jackets did not appear to be part of a cohesive, comprehensive line. 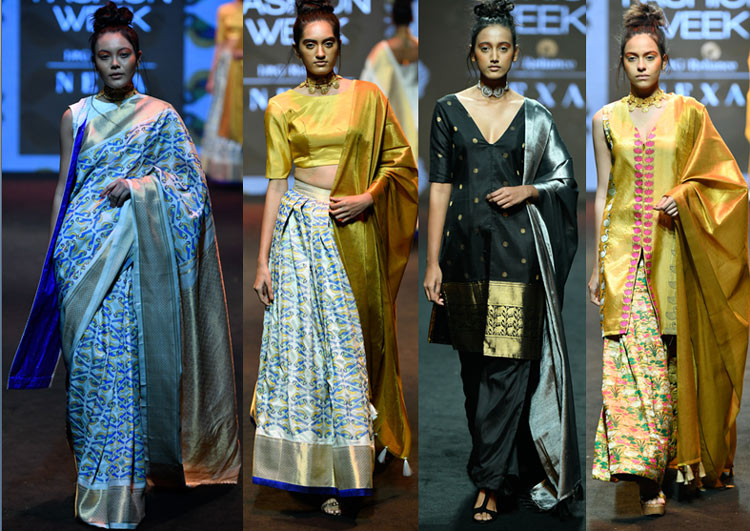 Known as a textile connoisseur and revivalist Parvathi.Dasari’s “The Tropical Paradise” featured saris, lehengas and anarkalis. The saris were great but were not enough to make a good collection. Chopping up saris for lehengas, cholis and anarkalis with basic designing, does not make an impression. Such designs can be seen at many sari stores around India so maybe some design aesthetics could be added before making a fashion week appearance. 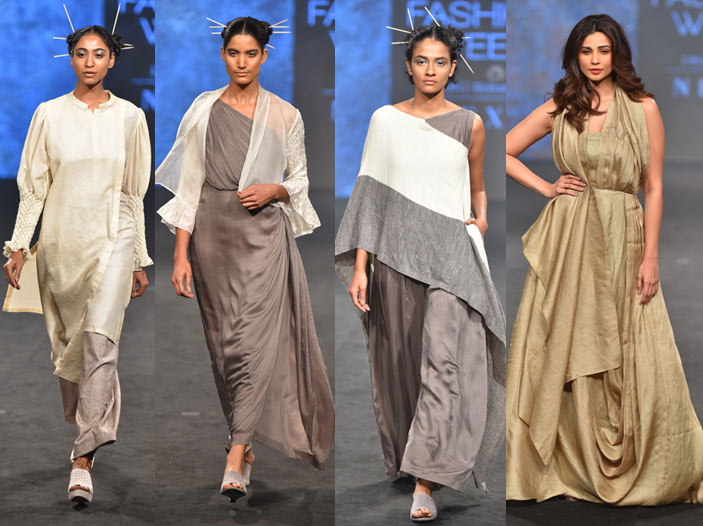 A title of a collection can be eye catching but do the garments live up to it? Kanchan More Sabharwal’s “Northeast Breeze” proved otherwise. Puckering seams, an attempt to create Zen like silhouettes with a dash of Issey Miyake thrown in as inspiration, can go very wrong as was seen throughout the show that ended in quite a disjointed showstopping outfit.