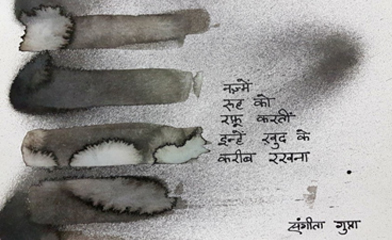 “The wound is the place where the Light enters you.” – Rumi 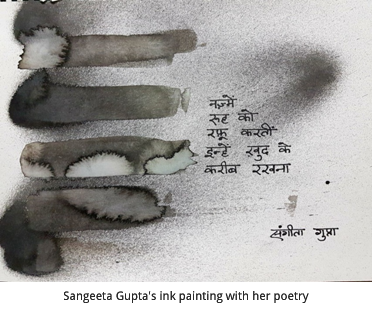 Such is the power of poetry that it lodges in the mind, in places unknown, and embeds in the crevices of memory, to resonate with the emotions that lie dormant. Some poets transcend the word play and find a way into everyone’s heart. Rumi’s divine poetry, even in translation,is as popular with the philosophers and thinkers, as it is with graffiti artists. The audience grows, even after the pen is put away. Definitely, a divine light shines within.

One such wizard of verse who stunned me with her poetry is Sangeeta Gupta. I discovered her poetry in the black hole of Facebook, the mundane spot for the inane, but a gem will shine wherever. Short verses, hand written on her ink wash sketches, whispering about love, and longing, like a personal note in a diary. We met, and she recited her poems, which we video graphed for our readers. Watch them here. She 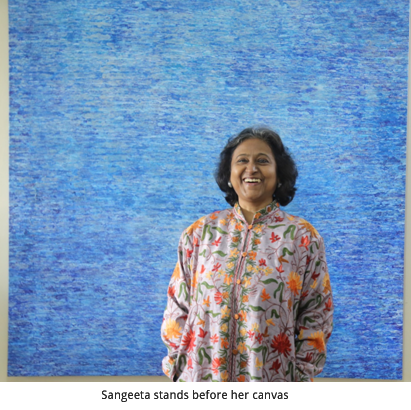 sat there in her rocking chair, with her canvases in the backdrop, and recited ten poems, from her published collections of poetry in Hindi and English, ‘Sparsh ke Gulmohar’, ‘Beparwah Rooh’, ‘Weaves of Time’, ‘Song of the Cosmos’. When Sangeeta recites, her brow furrows, the voice is deep, the gaze, as she lifts her face to look at her audience, is inwards. As she ends, her face lights up again, a wide smile and shining eyes, as if it was another person. My young crew was smitten by her poetry and her fluid charm.Her verses are about love, heartbreak, and longing, yet devoid of despair. I quote Rumi again who said, “Grief can be the garden of compassion. If you keep your heart open through everything, your pain can become your greatest ally in your life’s search for love and wisdom.”

Sangeeta published her first book of poems, ‘Antas Se’ back in 1988, with a foreword by the eminent poet Maha Devi Varma. She recounts her first encounter with the Jnanpith Award winner, to whom she proffered her poetry book for a critical opinion, but was cursorily rebuffed. Subsequently, Maha Devi ji hailed Sangeeta as a ‘born poet’, exhorting her to ‘Never give up composing poetry’. Not only did she write the foreword, Maha Devi Varma took Sangeeta Gupta under her wing as if a daughter. Since then, Sangeeta has published several poetry books, in Hindi and English, and her collection of English poems, ‘Weaves of Time’, is translated into Greek. Her book ‘Iss Paar Uss Paar’ is also available in Bengali. Back in 1991, her collection of short stories ‘Nagfani Ke jungle’ was published to critical acclaim. A celebrated photographer, she has published coffee table books on Ladakh and Srinagar, amongst others. She is a documentary filmmaker, and four of her videos are in the Library of Congress. Her documentaries span topics like ‘Greece- Continuum of Consciousness’, ‘Kung Fu Nuns in Mystic Ladakh’, four works on the famous artist Keshav Malik who became her mentor and guide. As a footnote, I must add, that she also happens to be Chief Income Tax Commissioner of Delhi, which in itself is a very demanding job. The list of her awards is too long to mention here. Recently, the music company T-Series has made a music video of Sangeeta’s poem sung by the singing sensation Palak Muchhal.

To reach the pinnacle of success as an artist, in one lifetime is an achievement. Likewise, for poets and writers, who have to invest weeks and days ideating, composing, pursuing publishers, book launches, and readings, attending literary festivals and travelling. Sangeeta Gupta is high octane. She does all this and more, such as the several CSR projects, as a Founder Patron, of three initiatives across Delhi and Kolkata, on art and empowerment of women. 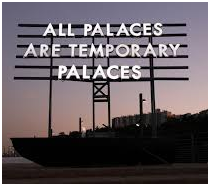 I spent many evenings and outings with Sangeeta, looking for answers to my many questions, her formulas for multitasking, perhaps chinks in the armor, or recipes of what makes her tick. Instead, I found a bright divine light that shines through Sangeeta. I came away awed, not just by her grand success, but that she wears it all lightly, remaining grounded, devoid of arrogance or officious airs, never flaunting intellectualism. Her youthful countenance connects her easily with all age groups. Wherever she goes, people flock around her. She is in a hurry, fulfilling her mission here in this lifetime, being many things, along with being a loving mother. There is a deeply spiritual side to Sangeeta Gupta. 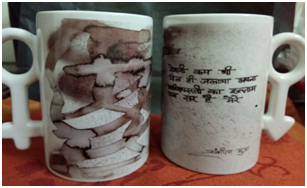 Currently, Sangeeta is working on popularizing poetry with the youth, to bring it into the routine workspace. On this, she is in sync with the global trend, where there is a movement to bring poetry and prose into public spaces, much like art. The London-based Scottish artist Robert Montegomery has put his prose on billboards along highways, on walls and bus shelters. I quote Montegomery from what he said in an interview on BBC, about words on billboards rather than images. He said, “I think there’s a certain slowness to words. I think we probably live in an age of accelerated image and we’re bombarded with hundreds of images a day and ironically in that context words can be a moment of quiet or pause.” Another initiative to popularize poetry is the ‘Pay with a poem’ campaign that reached 34 countries on World Poetry Day, where the patron has to contribute a poem and get a coffee in return. Sangeeta has printed her poetry on coffee mugs and mouse pads, where one can encounter it daily.How wonderful to smell the coffee and imbibe a poem. Push a mouse across words that will unfold gently in that moment alone.
Sangeeta’s books are available on Amazon.

Excerpts from the poem ‘You and I’