Home » Travel & Food » A Slice of Luxurious Italy in Delhi

‘Sei in un paese meraviglioso’,
(You are in wonderful country). 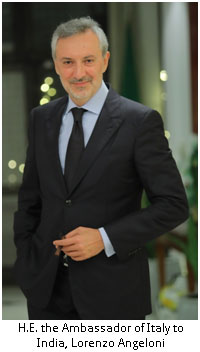 The Italian highways are punctuated by billboards put up by the Autostrade per l’Italia, which remind the motorist about the heritage of the town or city nearby, with their slogan ‘Sei in un paese meraviglioso’ or You are in wonderful country. On 11th December, 2018 the Italian Embassy in New Delhi hosted a showcase of the ‘Best in Italy’ luxury heritage products and services within their sprawling green campus. Most appropriately, the program guide sported the slogan borrowed from the Autostrade per l’Italia, ‘Sei in un paese meraviglioso’, and H.E. the Ambassador of Italy Lorenzo Angeloni spared no efforts in successful invoking the same emotion in the hearts of the guests, of being in a wonderful country. Large hoardings of Italian heritage monuments, a red Ferrari parked tantalisingly, exotic floral arrangements, the many food counters, lamps and lights adorning the venue, hanging from the trees, candles and vases on table tops, creating the feel of being in a Piazza Italia, an Italian square. Such was the magical setting of the venue that even the unexpected downpour from the heavens did not deter people from having a grand time.The event brought into focus those towns and regions of Italy, which are not so well known to the Indian traveller. 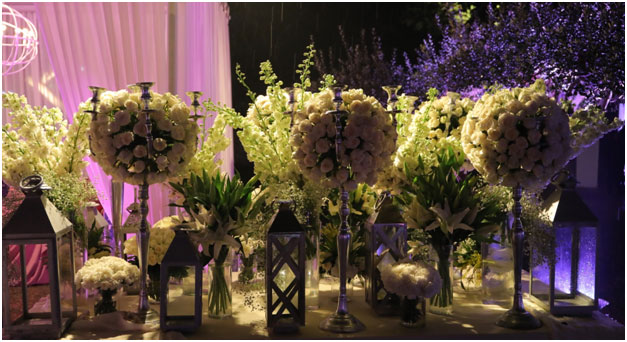 Indeed, it was a grand initiative, where every object d’art, raw materials for the culinary fest, the cheese and pasta and sauces and condiments, cookware, tableware, coal ovens, lamps and vases, were all flown in directly from Italy. The list of participants included the top-of-the-line legends in Italy, handpicked for the event by H.E. the Ambassador himself. It was an introduction of the best of Italy to the discerning denizens of Delhi, on what one can experience when travelling to the country. The growing allure of Italy as the ultimate wedding destination, further endorsed by the recent high-profile wedding of the Indian cricketer Virat Kohli with the famous actor Anushka Sharma in Tuscany, has caught the fancy of the Indians, who are known to spare no cost for an extraordinary memorable wedding. From having personally explored the various regions of Italy, I agree that Italy has the most magical destinations and venues.

The architect or designer of the venue was the celebrity specialist from Italy, Angelo Garini, who has lent his expertise to many a high-profile weddings and events in Venice and other parts of Italy. The beautiful flower decorations, the setting of the venue were all reflective of his magic. He was the busiest man that evening. He was ably assisted by Gaurav Makhija from India, for the local logistics.

Even as the first few drops of rain began to come down, coinciding with the arrival of the first of the guests, the beautiful music wafting from the veranda alongside the lawn drew the visitors to the Le Dogaresse String Quartet from Venice, dressed in the traditional Venetian costumes. Interesting tid-bit of information I gathered from my online-searches is, that back in history, a Doge was the chief magistrate of several republics of Italy, especially of Venice, and his wife was the Dogaresse. The four beautiful women of the Le Dogaresse String Quartet, Germana Pinarello, Anna Moro, Valentina Rinaldo and Elisabetta Rinaldo appeared to have time travelled from the historical past in Venice, dressed up in silver wigs and elaborate gowns, as they played the violin, viola, cello with expertise. The Master of Ceremonies of the string quartet, Fabio Moresco, had travelled in time too, dressed up as he was in vintage attire, curly wig and all. He received the maximum request for selfies, and was probably the most photographed male at the event. As the rain picked up intensity, people went indoors, where they were mesmerised by the musical duo, Soprano Elena Bertocchi and Tenor Sergio Rocchi who presented the Opera Ariette. Nothing uplifts the heart like soulful music.

Uplifting the spirits, so to speak, was the well-known aperitif Campari, which was one of the sponsors of the evening. Their cocktail Spritz was a big hit. Straight from the city of Juliette was the brand Sartori de Verona, a leading name in fine wines from northeast Italy’s Veneto region, serving their famous Rose and Blanc offerings in the wine corner. 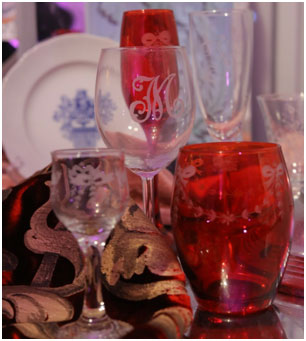 Italy’s history is well preserved in its ancient castles that are yet inhabited by the younger generations. In the southern coastal region of Italy, San Vito dei Normanni is an Italian town in Puglia. Here is a 12th century castle, Castello Dentice di Frasso, which is the only castle in the region, continuously inhabited since 1700. This is the home of the descendants Prince Giuliano Denice di Fransso and his beautiful and talented wife Princess Fabrizia di Dentice di Frasso. Their castle is a perfect showcase of the royal heritage of the region, with well-preserved interiors and grounds, which are selectively available for special events. Princess Fabrizia has revived and mastered the art of glass engravings. Her engraved glasses, much coveted by those with the discerning eye, were on display here at the Embassy in Delhi. They flew down to Delhi to be a part of the showcase, and were present at the event. The display tables were covered with the famous embroidered cloth of Italy.

The city of Naples is known as the birthplace of pizza. In fact the Margherita pizza is named after Queen Margherita of Savoy, to commemorate her visit to the city. UNESCO has declared art of making pizza as Naples Intangible Cultural Heritage. We tasted the best fresh hand rolled Margherita pizzas, cooked in wood ovens. Ferrero, already well-loved in India for its chocolates, served delicacies of another kind from its gourmet live counters. Spinach ravioli set in sage, butter and asparagus sauce, Scamorza cheese lasagna in presto sauce, risotto carnaroli in seasoned Parmesan cheese, and the Cornetti with Nutella. Artusi were the caterers for the evening. 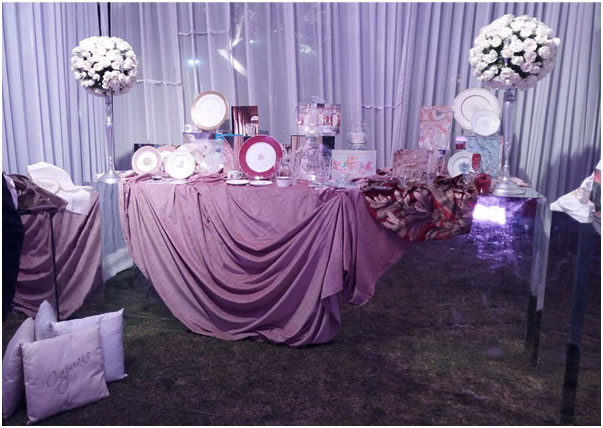 Another treasure from Naples was the swathes of covers on the tables, with delicate embroideries on rich fabrics, brought to Delhi for the showcase by Antonella Capuano. She is the head of her family firm Capuano Forniture Tessili, a well-known name for such luxuries for homes and events.

The evening came alive with peppy mixes of Italian, English and Indi pop, which we found out was the creative work of the famous Italian DJ Marco Moreggia, who works only with pure vinyl and still mixes music the old fashion way. He had flown in thousands of vinyl in preparation for the evening. Moreggia is a legend, invited to such high profile global events as MTV Music Award parties for BMG and Sony with special guests Duran Duran, Macy Gray, Usher, Naomi Campbell. He spins at Richard Branson’s birthday party, for Tim Burton etc.

Alitalia, the Italian airline, which has resumed flights between Delhi and Rome once again after a long gap, was also the sponsor partner for the event. A special Alitalia Lounge was created at the venue, and smart air-hostess dressed in the uniform of the Italian flagship carrier, welcomed people. Alitalia made a unique presentation of the oldest uniforms of its flight attendants, all of which were styled by famous fashion designers like Armani, Sorelle Fontana, Mila Schön. Mannequins adorned in the dresses from the archives, were on display at the venue. Of the eleven dresses originally planned, only two could be displayed due to weather conditions.

The evening was a big hit, where inclement weather did not deter the guests from showing up. So much so that more than double the invited number showed up to see the luxuries of Italy. Time to head out to Italy.