After delaying for nearly three years since the global launch in 2017, of its flagship sedan A8L, Audi  finally planned  to launch the much awaited long-wheel base version, Audi A8L sedan, in India in February 2020, and got its timing all wrong. Somnath Chatterjee took the car for a spin, and came away suitably impressed with the 5.3 metreslong and 1.95-metre wide gizmo-studded motorcar. He shares his experience with the readers of The Luxury Chronicle

When I approached the new Audi A8L for the first time, I was a bit intimidated by the sheer length of the car along with the prospect of driving it through the slightly cramped turn outside my house. I was actually thinking of giving up driving it for the first bit and keeping that for later.

However when the keys to this long leviathan was pressed into my hands, I was intrigued and decided to drive it first anyways. I love driving more than being chauffeured, no matter how luxurious the car might be. Sitting inside the A8L, I was surrounded by a tech fest of screens and the finest materials that humankind has to offer. The massive centre console is dominated by two touch screens while the glossy black surfacing is nice and goes with the futuristic vibe of the car. The vents look stunning and so does the “clean” look of the interior. The dials are digital too and again the best in the business in terms of display and usability. I would have wished for more physical controls since I have to use the touch screen on the go, but that aside this is like a Tech-Store-Meets-Gentlemen’s-Club. 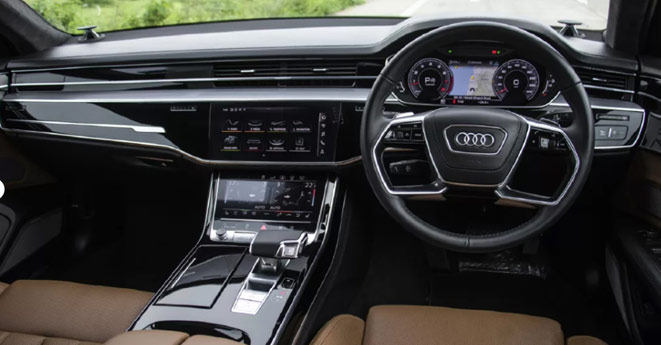 I also discovered how easy the A8L is to drive. Despite being the longest in its class, the Audi feels the easiest to drive. The steering is light and all that weight melts away from behind the wheel. The A8L feels more like an A6 behind the wheel and soon I was pushing the car as if it was a sports sedan! 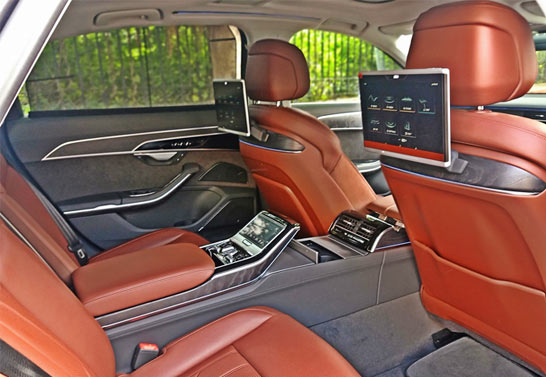 With a 340 bhp V6 and a mild hybrid system adding in further oomph; the big Audi feels agile and quick. You end up doing big speeds with no fuss and while that is something you expect from a top drawer limo like this; the pleasant surprise is the athletic nature and I like that. It is also enjoyable from behind the wheel and that is something one cannot say about others in this sector. It floats less yet the suspension gives you that smooth ride which you expect from a limo.

Driving done, I handed over the reins to the chauffeur and sink myself into the rear of this plush cabin. Without doubt, nearly all owners will sit at the back and I can see why. It is a tech fest and with a button pressed, you can move the front seat (passenger side) forward and relax completely. No sooner I was getting a foot massage and enjoying the Bang & Olufsen 3D surround sound system plus using one of the removable Android tablets. There is a remote control for every feature including getting a massage and more. Honestly I might retract from my statement at the start since if a car is so luxurious plus comfortable, I might not mind driving at all! 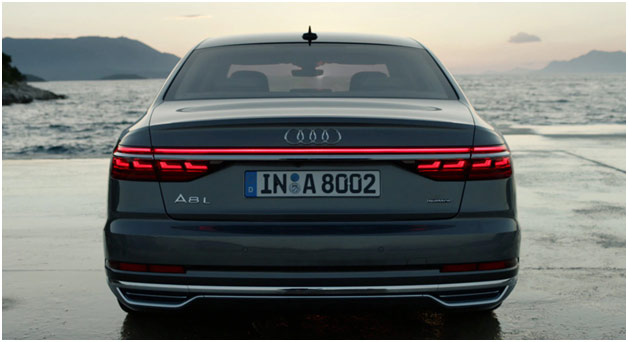 The A8l is also about exclusivity with more than 50 exterior colours and numerous interior trims to choose from. From the outside, it is surely the most extrovert A8 but still casting a long and stately appearance plus I love those OLED tail lamps.

If you want a limo that is also enjoyable behind the wheel along with every gadget/luxury, plus a hint of refined power dressing, then the new A8l is for you. In-fact the flagship Audi does justice to its Rs 1.5 crore plus price-tag somewhat and we also think it’s currently the best in its class.

Audi E-Tron : An Alluring Combination of Electric
prev next