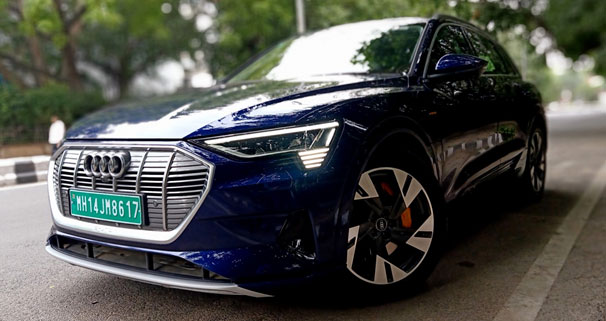 Of the many stages in the manufacture of a good whisky, it is the final process of maturation and ageing over several years in wooden casks that infuses the final subtle flavors that define it and make it distinct. The art of Cooperage involves fine craftsmanship to get the right wood, construction, thermal treatments, or ensuring the right recycled casks of port, sherry or ale popularly used in the maturation process. The final notes that the whisky aficionados try to identify, the nose, all happens when the cooperage is right. However the slightest of aberrations in the wood of the cask, such as infection or mould etc can hugely affect the stock and alter the notes and flavors

The Audi e-tron is also one of those cars you appreciate in the flesh, it being much bigger than what you would imagine. Along with being subtly peppered with distinctive styling details such as the gray single-frame grille, the stunning Matrix headlamps along with 20-inch wheels (with its brake calipers painted in a unique hue) add just the right amount of flash. It is nearly as big as a Q7 and turns heads. The colour on our car also helped matters.

Inside, the quality and design is very much Audi, it being layered with clinical precision. It might be relatively less extrovert as compared to the exterior, but is well built nevertheless. There are big screens which dominate the attention, with very few physical buttons, along with luxuries like four-zone climate control, a Bang & Olufsen Sound system, heads-up display, ambient lighting, air quality package with air fragrance, a massive panoramic sunroof and more. We will say that the heads-up display is brilliant in its clarity and useful when on the move. The dual touch screen set-up works like a charm with haptic feedback when you touch it. Crucially, the e-tron is the most spacious EV that we have seen with an immensely roomy cabin thanks to a longer wheelbase than rivals. 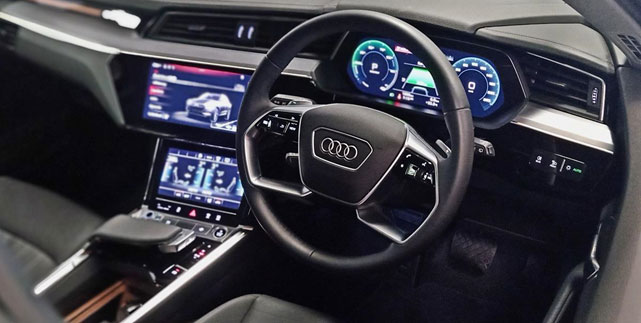 As mentioned earlier, there are three versions of the e-tron that one can choose from. We drove the e-tron 55 Quattro which is the more powerful version with a 300kW/408 hp output, having a 95 kWh battery. The immense torque output of 664Nm is also available instantly! It is fast and incredibly smooth, which makes driving much easier along with enjoying the performance. One of the big advantages of an electric car is how seamless the driving experience becomes. All of the performance is available, just waiting for your call to unleash it. 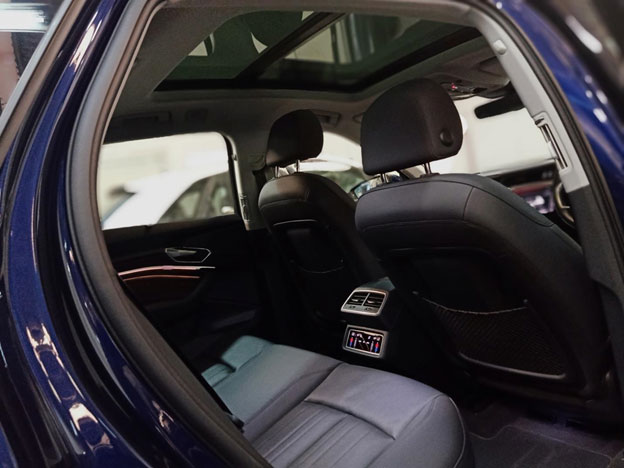 The standard air suspension is quiet, giving a proper luxury car ride. According to the configured settings, the e-tron can be raised or lowered, while the ground clearance is more than enough to cope with the worst of the road surfaces with ease. In other words it behaves like a talented luxury car but one that is also an EV. The range of 359km-480km means it is currently the EV with the highest range and also more than able to take care of your daily distances and honestly, you only need to charge it once a week or more. It can do short road trips too.

Audi e-tron buyers get a complimentary wall box AC charger in addition to the 11kW charger that comes standard with the car. The charging time via an AC charger is about 8-hours plus. A DC fast charger cuts that to just 30 minutes. Overall, there is little doubt that the e-tron is my favourite new Audi and also the best electric car I have driven till now. It might be convincing enough for die-hard petrol heads to make that jump to electric! Prices start at just under Rs 1 crore for the e-tron 50 while the 55 version as seen here is priced at Rs 1.16cr. The Sportback version is slightly more expensive at Rs 1.17cr.