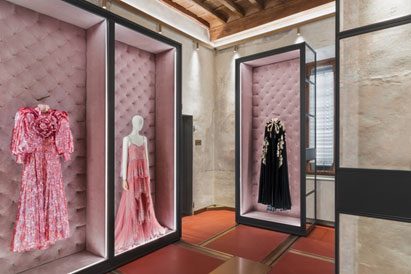 As part of its centenary celebration, Gucci has opened a new home of Gucci Archive in the 15th Century Palazzo Settimanni, located on Via delle Caldaie in Florence in the Santo Spirito neighbourhood, in the area known as “Oltrarno”, on the left bank of the river. This is where artisans and artists had their workshops, and by the 16th century, following the Medici family’s move to Palazzo Pitti, they had established themselves alongside the residences of aristocratic families who chose to build their sumptuous homes there. Acquired by Gucci in 1953, the Palazzo became an integral part of the brand, both physically and metaphorically. It has served as a factory, a workshop and a showroom. Creative Director Alessandro Michele is behind the refurbishment and restoration of the Palazzo Settimanni in its new role as the house of Gucci Archive.

“Palazzo Settimanni, now free of earlier additions, is transformed into a magical place to which I have restored a sense of porousness: you pass through it, air gets in, you can walk through it as if it were a journey. I’m porous, absorbent, permeable”, explains Alessandro Michele. “I have restored to the Palazzo a fairy-tale aura which, for instance, allows the small entrance hall to become a gateway to a dream dimension. I envisaged it as a sort of secret place within the House, an inner sanctum from where one sets out for Gucci’s holy lands”. 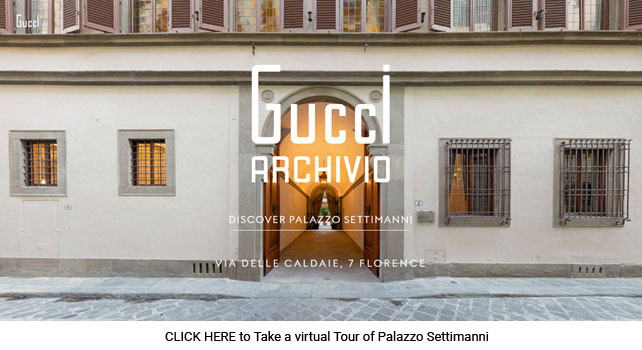 All modern structures have been stripped away to reveal vestiges of 19th century decorations, 18th century trompe l’oeil, late 17th century frescoes and even earlier ornamentation; all deliberately left intact or restored to their original splendour without being moved or altered. Everything has been planned, arranged and designed as a home for the brand’s historic collections: from the furnishings to the details of the handles that replicate a pair of scissors, from the glazed wunderkammer [cabinets of curiositi] to the lamps, the precious cabinetry and the large cupboards in glass and iron. All restoration was carried out by local specialists, including the terracotta floor tiles produced one by one in wood-fired ovens. 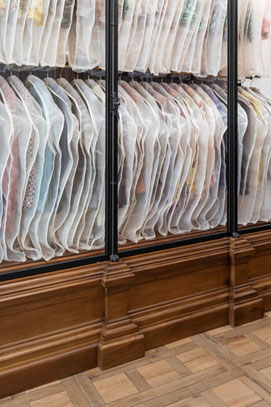 The ground floor houses the collections of vintage handbags (Hortus Deliciarum hall), small leather goods and vintage belts (Prato di Ganimede hall – the field of Ganymede), an exhibition room (Swan hall), vintage and contemporary jewellery (Le Marché des Merveilles hall) and vintage luggage (1921 Rifondazione hall). Textile creations — scarves and dresses — and footwear are housed on the first floor, where the space is divided into rooms with evocative and powerful names, such as Orto di Giove (Jupiter’s garden), The Alchemist’s Garden, Serapis, and Aveugle par Amour, to name but a few. Lastly, on the second floor, we find the Façonnier des Rêves hall.

Palazzo Settimanni is also home to Gucci Education, where it offers training opportunities for the brand’s employees, where students may experiment with personalised learning pathways, based on specific needs, interests and abilities. It includes practical academic programmes like Retail Academy, the Supply Chain Academy, the HR Academy and the Digital Academy, but also the École de l’Amour, which is physically housed in the ArtLab and in Gucci’s production facilities.

India –‘Carnival for a Cause’ hosted by TajMahal

Italy – Gucci to Present the Cruise 2020

GUCCI takes the lead with OFF THE GRID
prev next