The US based recording artist and designer Christine Storm has launched her signature Golf & Resort women’s wear collection in India. She presented her Clubwear Creations by Christine Storm line at an exclusive event at The Claridges New Delhi. The evening was co-hosted by golfer Neelam Pratap Rudy and Rajeev Anand. The latter is also the Indian partner to Christine Storm.

The collection comprised dresses, trousers, shirts in varied colors and cuts. The manufacturing of her line is entirely in India. On the occasion Christine storm said “I am very excited to launch my Golf and Resort line in the Indian market. My collection has found a place on the world map too that is why it is imperative to promote our Indian endeavour. I hope to create a new language of high definition glamour, once we introduce our garments in the Indian market”

The Label Clubwear by Christine Storm will be retailed in the Indian markets through Online, Pro – shops and high end boutiques. The collection that would be available in the Indian markets will be mid and high end range comprising of the Golf and the resort line. The USP of the collection is that one can wear it on the fields and also during an evening affair says Rajeev Anand Indian partner to Christine Storm.

National recording artist and designer Christine Storm has performed throughout the world, has been a 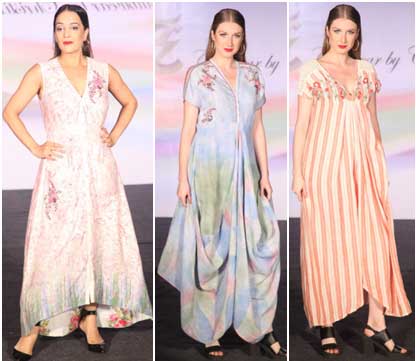 prolific songwriter, and continues to tap into her wide range of life experiences for her music. Christine’s influences range from Alice Cooper to Blood, Sweat, and Tears, all the way across the spectrum to Kate Bush and Prince.

It was there that the wheels began to turn for her label “Clubwear”, taking couture inspired golf clothes from the course to the club with a change of a shoe! While watching golfers on the course she began to imagine lines on the body that might be put there from a high-end designer or costumer that would allow someone to look taller and slimmer while still effortlessly swinging the club, freeing them from the boxy, unflattering attire she was witnessing.

She has lived most of her life travelling as an entertainer in the United States and abroad in Las Vegas style shows and night clubs, where she worked alongside costumers, tailors and designers. In between her singing and acting jobs, she worked as a cart girl on golf courses!