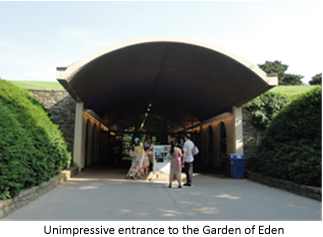 One muggy June day in Philadelphia, my daughter Christina informed we were going to spend the afternoon, evening and night in a botanical garden. When it comes to sight seeing, monuments, gardens, zoos, museums and landscapes, I am not a typical tourist who clicks photos at these places or enjoys wandering through them. However, Christina insisted that it was a place I would love since it was much more than just a garden. And how true she was.

It was an hour’s smooth drive from Philadelphia when we reached the magnificent Longwood Gardens known as one of the Great Gardens of the World. The entrance was simple and rather unimpressive, but when we walked in, I was totally surprised. Here was this gigantic 1077 acres American botanical garden in Kennett Square Pennsylvania, amongst the Brandywine Creek Valley.  Founded by Pierre Samuel du Pont in 1906, it was designed to offer more than pretty sights. The Longwood Garden has a botany, education and art section with 4,600 different plants, trees and fountains and a 4-acre Conservatory along with 20 outdoor gardens, while the map of the gardens also highlighted the various Meadow Gardens. 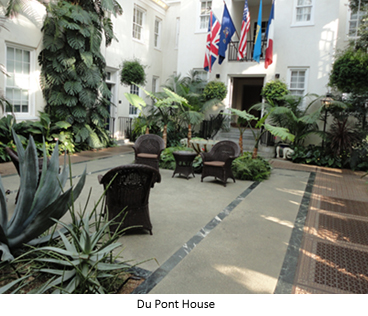 William Penn, who sold the 402 acres to George Pierce in 1700, originally owned the Longwood Gardens, as they are now known now. The descendants of Pierce turned the property into a farm, with an arboretum planted in mid-1800 with the best collection of trees in the USA.

Pierre Samuel du Pont, Chairman of the DuPont Company and General Motors Corporation purchased the property in 1906 when the trees on the land were about to be sold for timber. Du Pont maintained it as a summer retreat and allowed the public to admire its beauty. In 1954 when Du Pont passed away, he left the Gardens, “for the sole use of the public for the purposes of exhibition, instruction, education, and enjoyment”.

The Longwood Gardens Inc. a not-for-profit organization runs the gardens without government funding since the funding comes from Pierre Samuel Du Pont’s endowment as well as admission income and merchandise sales. 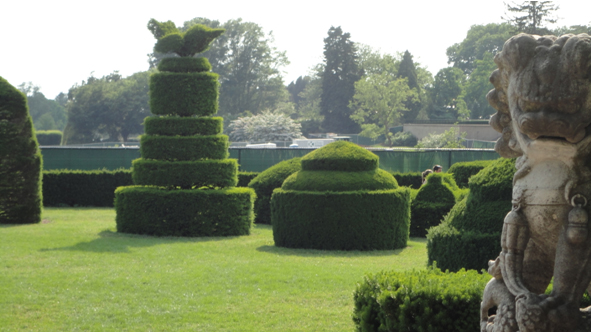 Our first glimpse was of the Topiary Gardens created in manicured, geometric, shapes, arches and circles. But there was more excitement awaiting us that included the fine dining restaurant, multi-coloured musical dancing fountains and an open-air performance of a hit musical.

Here was a Garden that definitely required a full day’s devoted visit. The winding paths led us past the grassy steps where one can sit and admire the beauty of nature. Our first stop was The Conservatory a stunning modern day Garden of Eden that left us breathless with wonder. 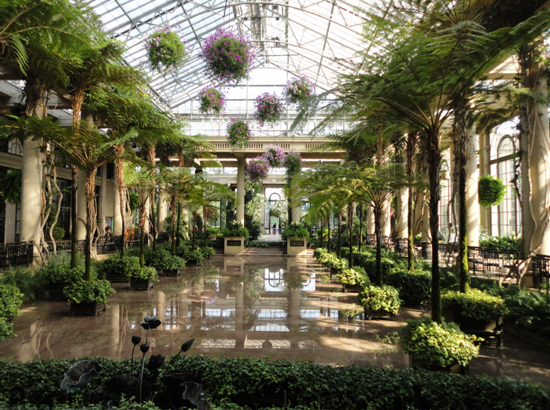 The entrance of the Conservatory began with the East Section and the Indoor Children’s Garden and Path on the left. As we walked through the marvelous foliage we entered the Exhibition Hall with the Music Room, Ballroom and Pipe Organ Gallery next to it on the right and the Main Conservatory and Orangery on the left.

The Water Lily Display with the giant plants had the Tropical Terrace, Orchid House, Acacia Passage, Banana House and Silver Garden on the left. The Mediterranean Garden was next with the lush Palm House; Bonsai section, Potting Shed on the right and the Fern Passage, Rose House, Cascade Garden on the left with the Conservatory’s Estate Fruit House in between along with the Growing House. 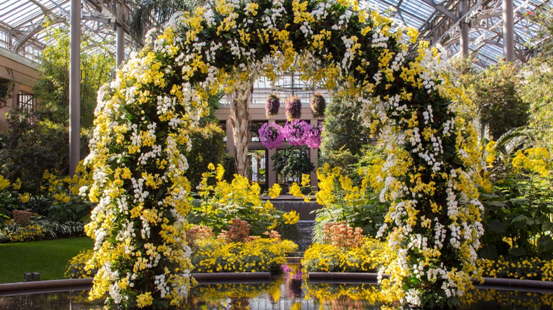 Greenery of all shapes, sizes and hues with bubbling water ways greeted us under the giant glass atrium. It is totally impossible to name the thousands of plants that were seen in all their beauty. Clumps of flowers were planted in eye-catching corners clubbed in tonal hues. The 4-acre Conservatory almost seemed never ending with nature’s beauty given pride of place at every step. The fountains and plants gave way to a large airy hall with artistically planted trees and tiny bushes surrounding their base. The magnificent arches, pillars and retro architecture added to the beauty and grandeur of the surroundings.

Stepping out onto the pathway, the adjacent Lily pond was a vision of serene beauty. It was the East Indian Lotus variety with some leaves so strong that it is believed that one can stand on them. The orchid section had unbelievable varieties, while the grey/maroon giant leaves of the Ti-Plant were imposing in size.

DuPont’s Music Room with the grand piano, his furniture and portrait revealed his lifestyle of days gone by. The 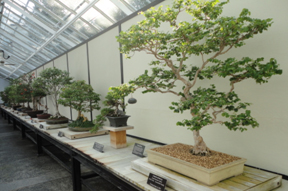 miniature Bonsai section brought from various parts of the world and families had displays like the miniature pomegranate tree from South-West Asia credited to the Loosestrife Family with training in 1960’s. The Japanese Black Pine from Japan by the Pine Family with training since 1949 and the Crape-Myrtle tree from South-East Asia also by the Loosestrife Family had its training since 1944. 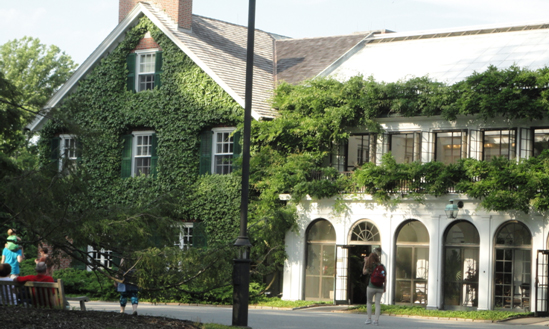 A visit to Du Pont’s house brought back nostalgic memories of the billionaire’s lifestyle. A pictorial history of Du Pont’s work to create the gardens step-by-step, revealed the man’s dedication to nature. Known as the “Pierce – Du Pont House’ its name came about from the combination of the two families who lived for a total of 200 years. When Pierre Samuel Du Pont acquired Longwood from the Pierce family in 1906 it included the purchase of the 18th century farmhouse. 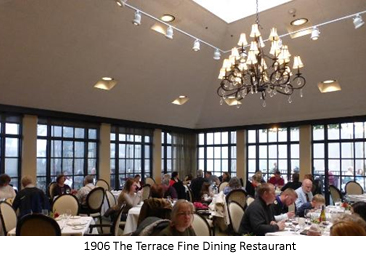 After wandering through the floral wonderland we were ready for dinner at “1906 The Terrace Fine Dining Restaurant” where the freshly baked bread was in the shape of a plant in a flowerpot. After innovative starters, the main course and dessert, it was time to move to the Open Air Theatre where the dancing fountains kept us entertained till the Gilbert & Sullivan’s smash hit musical, “The Pirates of Penzance” presented by the Savoy Company started after the sun went down. The fountains illuminated in every colour of the rainbow were a fascinating sight. There were several hundred jets of water shooting gracefully up 130 feet with the re-circulation of nearly 10,000 gallons of water each minute. It was Du Pont’s longing for an ornamental water in a garden setting that he had seen in Italy, which made him recreate it in the Longwood Gardens.

It was the 116th seasonal production of the musical with a cast of 65. The production was a visual and musical treat with lights, costumes, colour and vigorous dancing. 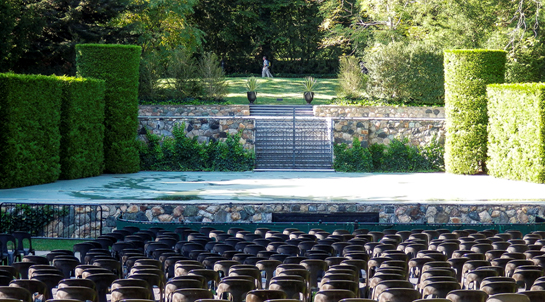 The Longwood Garden open Air Theatre has, in the past, been the venue of top musicals like Robin Hood, Arabian Nights, and many more.

The Longwood Gardens annual summer calendar is choker-block full with events like Birds Hikes, Wild Flower Meadow Hikes and other programs.  The gardens also offer a hands-on living classroom program for students of all ages and skill levels, along with internships, international gardens training program, library and information services 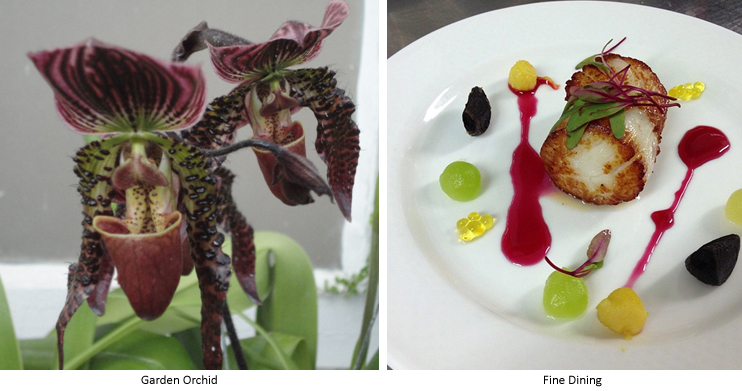 Of course our final stop was the souvenir shop where we headed to get some mementos to take back home.