Technology is ever evolving and rapidly changing our lives. Our cars too are getting smarter by the day. The Mercedes-Benz S-Class, launched in India recently in June, has always been the flag-bearer for innovation and technology. Every generation has introduced a new feature that has trickled down to mass market cars years later. In 1978 it was the Mercedes S-Class which was the first car in the world to have ABS (automatic breaking system). Now it is an essential feature in every car and a huge development towards automotive safety.

The subsequent iterations of Mercedes-Benz S-Class always prioritized utmost luxury and comfort over anything else.

Suffice it to say that the Mercedes-Benz S-Class is not just another car but a showcase of what the humble automobile can do. However, in today’s circumstances, the S-Class finds itself in trickier times. The world is increasingly falling out of love with the sedan and luxury SUVs are taking over the market along with technology disruptors like Tesla. The S-Class had to reinvent itself and with this new generation, it has gone in for a radical overhaul. 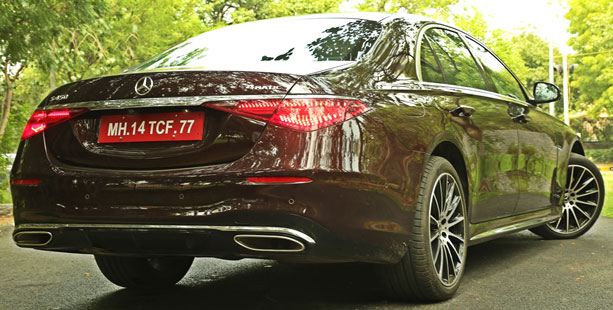 The new S-Class is younger, sportier, with cutting-edge technology, while still clinging onto the traditional values of luxury. On the outside, this car will appeal to the younger billionaire. The lines are sharper and sleeker while the AMG design touches further drive home that point. That said, it is still an S-Class with the same air of authority, without the earlier stiff upper lip.

But then the S-Class has always been about the interiors and here things have changed dramatically with a bigger leap into the digital sphere. The lay-out is also clean and uncluttered with few buttons, the basic design being reminiscent of a yacht. It is surely the best interior right now, with all that technology along with the old-world luxury charm – the sculpted dashboard and the centre console which floats, the fantastic combination of leather, open pore wood and metal along with a high quality finish. 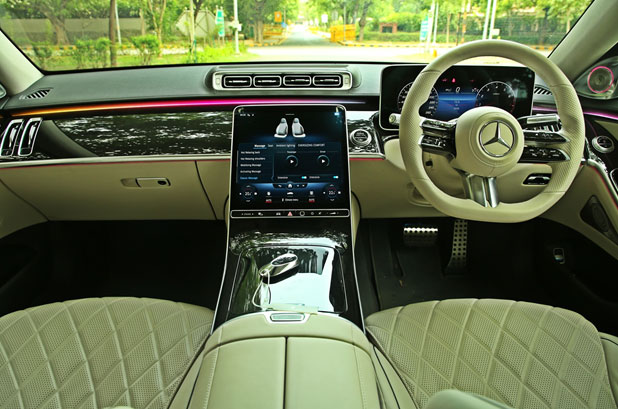 The talking point about this interior is the massive OLED centre screen. The quality of the graphics and the display plus the touch responsiveness is unlike any other car we have experienced. This screen controls everything. There are four other screens as well including the digital driver display. Speaking of which the driver display can be in 3D without you needing to wear any special glasses! 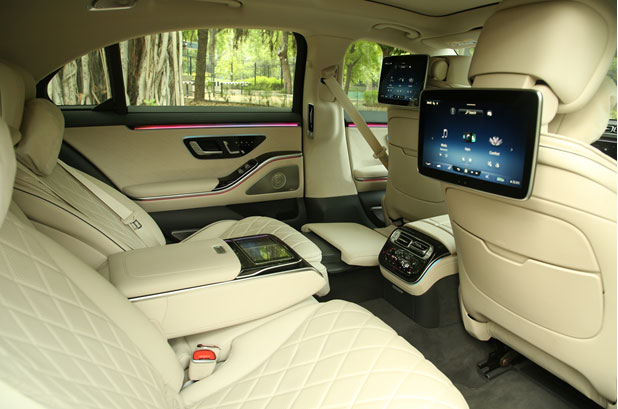 The brain of the car is the advanced multimedia infotainment, the MBUX infotainment system, which is clever and senses everything around the car. There is an advanced voice recognition system to access functions too. The touch screen contains many functions, neatly bundled together, enabling you to save your favourite settings and again access them via finger print authentication. 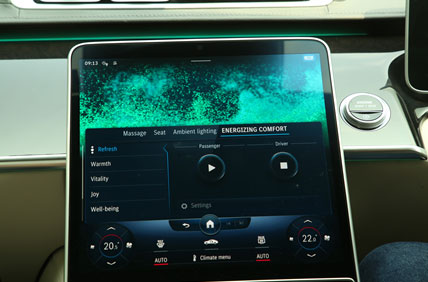 There are way too many features on offer to list here but I will mention the ones I really liked. Being someone who loves music, the Burmester 4d surround sound audio system with 30 speakers reminded me on how it feels to be at a concert since the seats have a speaker in them! The speakers are a thing of joy to see and the sound quality in unreal too.

What else? We must talk about the comfort features since the front seat has as many as 19 motors for massage and there are 10 massage programs too! However, I did find the rear seat the place to be in the S-Class with the chauffeur package making it look like a first class airline seat. You watch in amazement at the front passenger seat folding away and a foot rest coming in action. 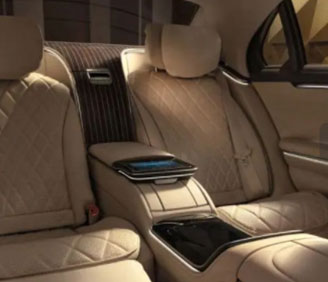 Then there are the soft cushions in which to sink your head and power nap. That said, the S-Class can be your work station too or even be a streaming device where you can watch movies (on either of the two rear screens) while having a massage – being controlled via a removable tablet. All these are good but there is even more on offer with the ENERGIZER vitality feature where the S-Class turns into a mobile spa with the ambient lighting, on-board perfume, climate control, massage and audio system bringing together an experience akin to being given a spa treatment.

Trust me, there is so much else to discuss but the S-Class also debuts digital headlamps, finding a parking spot and parking itself, and being ready for level 3 autonomous driving even if our roads are not. 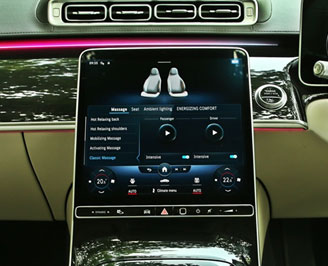 With all this, one tends to forget that this is a car which also needs to be driven to test it. Assuming that the owners will have their chauffeurs drive the S-Class mostly, but should they chose to get behind the steering wheel, they will like the experience. There are two engines on offer, the S400d and the S450 4Matic petrol. We had the petrol version and it makes 367hp while it does 0-100 km/h in 5.1 seconds. Behind the wheel, there is only a faint murmur that provides any evidence of the car moving. There is literally no engine noise and the driving experience is effortless with the vast reservoir of power under your right foot. It is supremely comfortable and powerful. 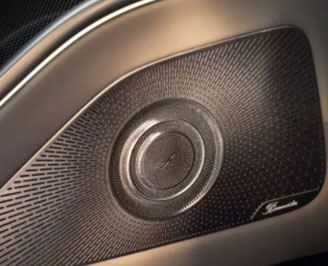 For India, the S-Class also gets rear axle steering where the rear wheels move in an opposite direction to the front, hence reducing the turning circle. It makes driving the S-Class less stressful in our traffic and something your chauffeur will certainly be thankful for! There is also a suite of driver assistance features present which uses cameras and radars to check what’s happening around you and in the car. The S-Class will warn you of a possible collision or will also emergency brake on its own.

Overall, the new S-Class seems to use technology as a means of achieving utmost luxury. It is cleaner to environment, sharper to drive yet still luxurious and fitted with amazing technology. Quite simply the most complete luxury car on the market today.