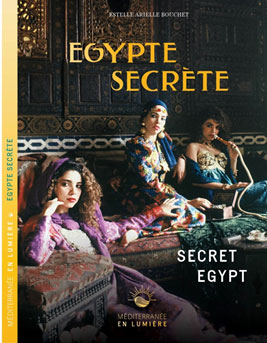 Estelle Arielle Bouchet’s latest book lives up to its name ‘Secret Egypt’, as the author shares with the reader tid-bits of insider information from her time spent in Egypt. The narrative is biographical and intimate, addressed to her first born son Nazem Shah, about his Egyptian heritage from her own memories. A coffee-table book format, it is well represented in the cover, where modern young Egyptian women dressed fashionably in Christian Lacroix and Yves St Laurent, are also an embodiment of an old culture.

The author brings a lyrical style of narration, and successfully takes the reader into a dream, travelling distant times and experiencing another culture through her narrative. Anecdotes, historical references, all come with a personal perspective. Embellished with many pictures, new and old or sepia tinted, some even from the family album, giving the time-lapse experience of a grand past and crumbling present, and oftentimes make up for the interrupted prose. It is an emotional enterprise by the author for her son Nazem Shah, who is now a handsome young man, an alumni of London School of Economics, married to beautiful Erika and now living in London. The book will be available in October 2021 and can be pre-booked.

Estelle’s  second book in the trilogy, ‘Provence Secrète’ is already in the pipeline and will be launched in 2022 in collaboration with the illustrious Simon de Pury, the renowned Swiss auctioneer, art dealer, and collector.

Could you tell us more about your book, ‘Egypte Secrète-Secret Egypt’ ? What is the genesis of this art book and initiatory path ? 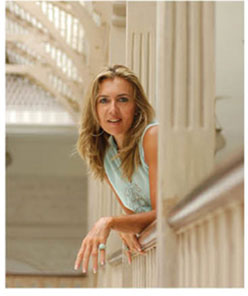 ‘Egypte Secrète-Secret Egypt’ is dear to my heart. It is an intimate book, a love story that I have dedicated to my son Nazem Shah. I met Egypt and Nazem’s father when I was twenty years old and I have been completely moved by the balance and Spirituality of this Civilization.

‘
My father, Professeur Alain Bouchet was an illustrious anatomist and surgeon from Lyon and his knowledge was very much connected with Ancient Egypt. I lost him last year. He wanted me to write, what I always did since a child, and to become also an editor to publish storical and literary writings, which I will do.

Egypte Secrète-Secret Egypte is a sequence of my life as a woman. There are in the lives of women, Seasons and Colors…. And also a permanency with children. The birth of this son gave my young life its whole centrality. Here is then the Egypt as I lived through Her in the years of 1990, through this journey which spontaneously led me to a space about which I had always  dreamt of as a child. While in Lyon, where I was born, in this city and its austere, studious and cold Latinity, I would gaze, as a little girl, at anatomy plates that my father meticulously drew. They would soon conjure the symbolic significance of the organs which Isis desperately attempted to recreate a scattered Osiris. I could foresee then that Egypt would play an important part in the path of my life, and would feel a deep anchor, still not knowing future yet, to this civilization ardently leaning towards the afterlife. Here also are a few figures, for the most part older persons, today having passed away, whom I met in Cairo, with enthusiasm, while I was a twenty years old and to whom I pay tribute in this book. Last bastions of a vanished Egypt, a Secret Egypt, one of a far away Orient which disappears alongside my own balanced and nomadic path. 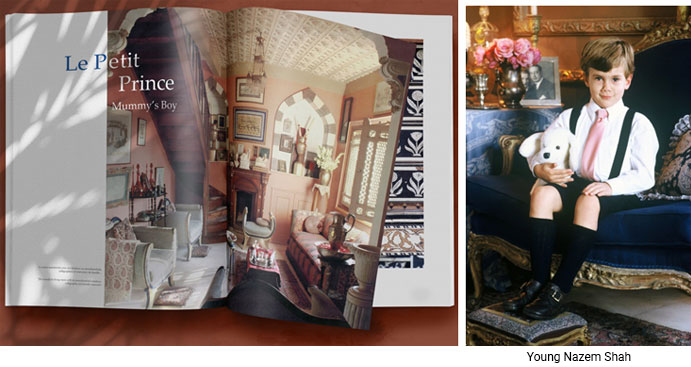 When can people get to read ‘Egypte Secrète-Secret Egypt’? Which other books are you planning to write and publish after this? Do you have an editorial strategy?

Then our committee has validated ‘Princess Catherine Gagarin’s Memories’. I am also fascinated by Cultures from the East countries and these incredible and strong destinies… We’ll also publish “Terre Battue” (Clay Court), the destiny of Leonora Shreger, young Hungarian lady who is a symbol of strength and resilience. She was Champion of Tennis of ex-Yugoslavia and had to grapple, as a young Jewish woman, with the threat of the Second World War. The family had to grapple with both Hitler Regime and Communism.

My editorial strategy is the one of the Heart and uncommon Destinies.

Will the other two books of the trilogy also be bilingual, in English and French, like the Secret Egypt?

The purpose of my publishing house, Méditerranée en Lumière consists in creating bridges between people through culture.  Thus, the French (my native language) with the English in all our books corresponds to this prerogative and offers a larger spectrum of readers.

You are also a publisher, and the founder of Méditerranée en Lumière-MEL Publishing House. How did the idea of setting up a publishing house occur to you?

When I went to Frankfurt Book Fair three years ago to find a publisher for my niche Art Book Egypte Secrète-Secret Egypt, and to promote another book “Louis Lliboutry, le Champollion des Glaces” Editions UGA, I was struck by this plethoric market. There were so many international publishing houses of all kinds; I should admit that I was a bit lost there to publish my trilogy. I saw Taschen, Mondadori and some other relevant publishers.

In the past I have been an editorial consultant for the major Publishing Houses in Milan: Franco Maria Ricci (FMR publisher and black silk art books), Leonardo Arte, Mondadori, Electa, Hachette, Conde Nast Italia. And for some of them, I was deterred by the importance of sponsorship, which could limit if not jeopardize the independence of the editorial choices and creative directions especially for the big editorial groups. Sometimes, it happens they behave more as printing houses and money makers without specific strategies or relevant ideas, losing thus if not their Soul, their intellectual spontaneity.

So I decided to create my own small intimate and artisanal Publishing House “Méditerranée en Lumière” based in north Avignon, former City of Popes in Provence.

The concept of Méditerranée en Lumière is to foster the economic, cultural and human exchanges between People and Cultures from the Mediterranean Sea, what we use to call from the latin world I belong,  “Mare Nostrum”- Our Sea. The idea of generosity and exchange comes from this appellation itself and highly seduced me. My purpose is to provide an exposure to People and Cultures having something to say. So all book projects that lay the emphasis on these themes are most welcome and will be highly considered.

How to deal with Rapists in Delhi NCR
prev next