The Red Carpet at the Oscars is the Big Daddy of all where a thousand lenses capture the celebrities in their fineries and are viewed by millions of people around the globe. This is the ultimate spot for a brand to make a mark. In and around the week leading up to the main Academy Award night, there are several other key events organized, which are as much in the spotlight. We bring you a sampling about who wore what.

On February 26, 2017 in Hollywood, Gucci was the preferred brand for the following celebrities. 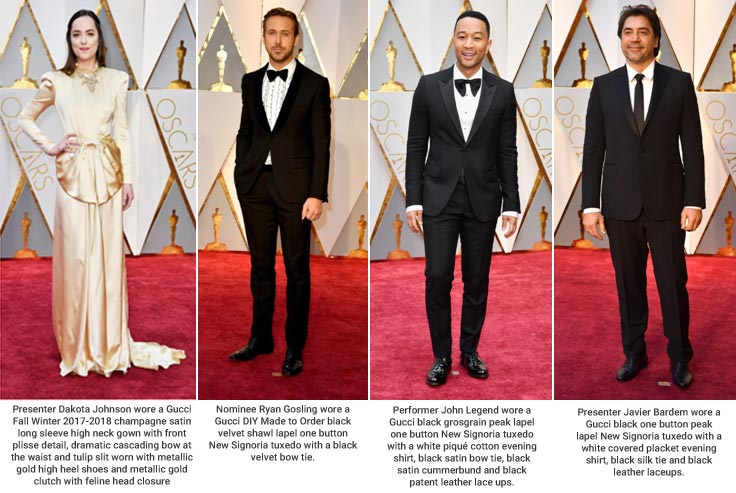 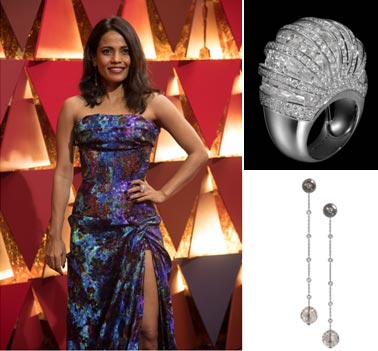 “It is so exciting to be partnering with Atelier Swarovski for our Red Carpet Green Dress campaign this year and have such strong women like Emma Roberts and Priyanka Bose stand behind us,” said Amis Cameron. “We have the scope for massive global impact and together can help spread the important message of sustainability. Furthermore, we aim to stir conversation and encourage those we reach to join the movement. It is wonderful to have the support of an organization, like Swarovski and women like Emma and Priyanka who hold such a prominent place in the fashion world, who share my vision to create more consciously, to positively impact the environment and make the world a better place for our children to grow up in. Together we truly can make a difference.”

Bose is an internationally celebrated model/actress who plays “Kamla Munshi” in the feature film “LION” alongside Dev Patel, which has been nominated in several categories including “Best Motion Picture of the Year.” 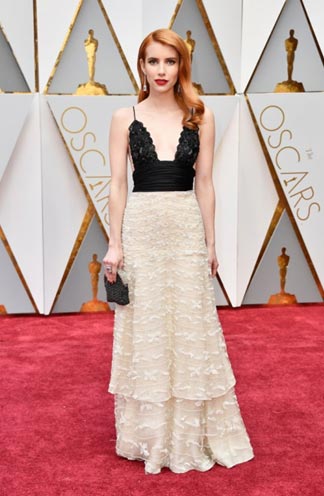 Emma Roberts is an undeniable talent known for her diverse roles in films such as “Palo Alto,” “We’re the Millers,” and the upcoming “Billionaire Boys Club”. Roberts currently stars as ‘Chanel Oberlin’ in the Fox comedy-horror series “Scream Queens,” from the minds of “Glee” creators Ryan Murphy, Brad Flachuk and Ian Brennan.

Swarovski strives to create beautiful products using responsible methods that align with the wellbeing of people and the planet. Atelier Swarovski is a certified member of the Swarovski is celebrating its 10th year collaborating with the Academy Awards with the launch of its first fine jewelry collection made with created diamonds.Since its inception in 2009, Red Carpet Green Dress’ sustainable designs have been worn by countless stars at the Oscars including Naomie Harris, currently nominated for Best Actress in a Supporting Role for “Moonlight,” “Twilight” star Kellan Lutz, Jake McDorman (“American Sniper”), Missi Pyle (“Gone Girl”), Gina Rodriguez (“Jane the Virgin” and Sophie Turner (“Game of Thrones”).

Red Carpet Green Dress is an internationally recognized organization that combines the worlds of fashion and sustainability. Currently in its eighth year, the campaign was conceived by Suzy Amis Cameron during the press tour for her husband, James Cameron’s film “Avatar”. Her hope is to draw attention to the importance of more sustainable practices in fashion by challenging designers from around the world to think about fashion in an eco-friendly context. The campaign also raises funds for MUSE School CA, a