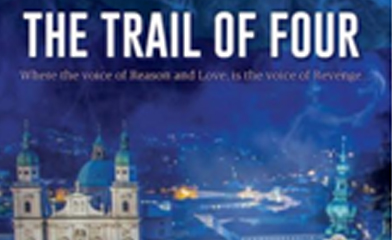 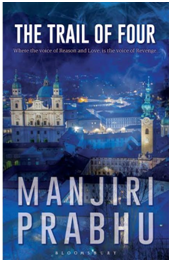 Title:  The Trail of Four– Where the Voice of Reason and Love, is the Voice of Revenge…
Genre: Suspense / Mystry
Author: Manjiri Prabhu
Publisher: Bloomsburry India
Pages: 361

Reading a full-length novel these days is an achievement in itself, what with all the distractions inside and outside the bedroom or even an attached study room! To her credit, Manjiri’s book ‘The Trail of Four’ was not at all difficult to pick up and read continuously through those peaceful interludes. That, to me, is the real test of a mystery fiction.

True to its mystery-DNA, the book weaves plots within plots – major and minor, tantalizingly suggests outcomes or ‘whodunnits’ or teases one through false leads and paths which turn out to be dead ends. The mystery is incomplete without the occasional body turning up at night and preferably on the dark side of a pond, and not to forget the wind whistling through the trees. All this while a romance blooms in the background (apparently the original intention of the author was to write a romance). To the mystery-thriller freaks – and there are many – this is precisely the titillation that feeds them. Dutifully, Manjiri keeps up the tempo and the interest intact. Today’s benchmark is Dan Brown and The Da Vinci Code and that is what the story tries to emulate.

The Final Blast is the Dramatic Finale where it all falls into place and major and minor inconsistencies are all ironed out, either by airing hidden facts, ‘trick photography’, or new inventions. But the less explanation that is required, the more consistent is the story. This is the part where there is some confusion and a letdown. The author felt a need to introduce Krampus – local folklore figures – and then add an extra chapter of ironing-outs.

The author has a head start by choosing a setting – Salzburg and the Schloss (declared a UNESCO world heritage site in 1997) – that has its own powerful culture, story and standing. The city is particularly known for the famous composer Wolfgang Mozart and the movie, The Sound of Music. Indeed, the author has ‘confessed’ that she was under the invitation of the Salzburg Global Seminar and Hotel Leopoldskorn, both of which featured strongly in the plot. The parties, no doubt, will be delighted with the excellent promotion that this book paints. While the opportunity and setting was not to be missed, some would read ‘compromise’ in the enactment.

Very much an Indian, the very European setting would have presented many challenges to the author, Manjari Prabhu. She has, however, come out unscathed thanks to her technical expertise as a writer and a story teller. The only Indian connection was the main character with an unlikely name – Re as in Sa Re Ga Ma. The character is supposed to be half-Indian and half-French, with a Hindu spiritual inclination and a French ponytail. Perhaps some more Indian ‘awkwardness’ could have been injected. All other characters were ‘plot characters’.

The final test of the book is in the reading, and I must say that I am delighted to have read the book and enjoyed the various twists and turns of the story as well as a walk through the great iconic structures of Salzburg.