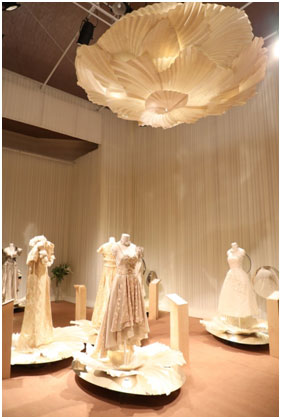 Last week on 23rd March, the Sari and textile brand Ekaya celebrated its collaboration with Fédération Française de la Creation Couture Sur Mesure at the Bikaner House, with a preview titled ‘Cousu d’Or’, where 15 international couture designers from five countries, presented interpreted their designs using Indian textiles. Six of the participating designers were present at the venue for the showcase, and were duly welcomed by the Ekaya founders, Bharat Shah and his daughter Palak Shah (CEO). The names of the six designers are Pierre Charles Letz (President of the Federation); Daniel Charles Simon Martin; Ali Thompson; Sylvie Kameni;  Guenaelle Debarnot;  Isabelle Beaumenay Joannet.

The showcase area was designed by Studio Lotus, who attempted to create the ideal frame for the mélange of hand-woven Indian textile with French bridal couture. The exhibition concept was influence by the eternal romance connecting flowers to weddings. The idea of a floral garden became the ongoing theme, with an oasis of origami forms of Victoria water lilies. The beautiful installations were crafted by Ankon Mitra and his team. 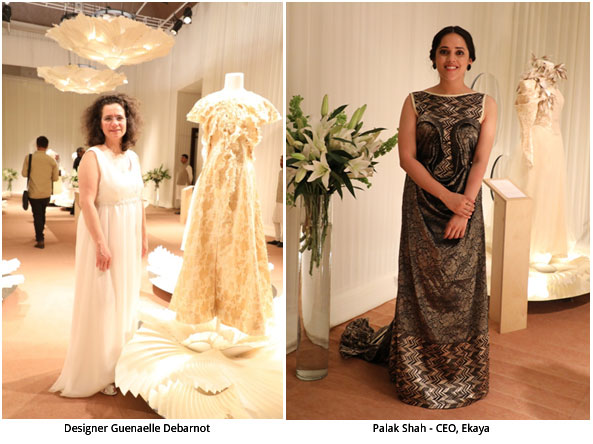 Speaking about the event, Palak Shah CEO of Ekaya said, “Our first dialogue with the Federation started back in 2015. ‘Cousud’or’, literally translates to weaving in gold or magical weaving. For this collaboration, we had specially created a capsule collection of luxurious ivory colored hand-woven fabrics considering the theme, presenting a rich selection of the brand’s signature brocades along with silks, cotton, georgettes, chiffons, tusser, organza, mashrusilks and chikankari hand-embroidery.”