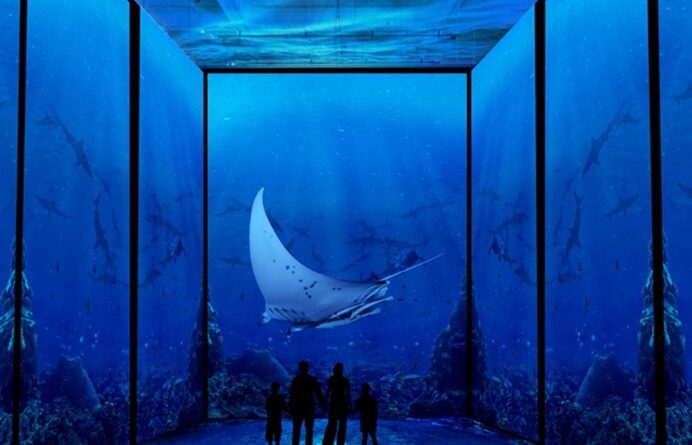 Dedicated to marine sciences, the Oceanographic Musem is the legacy of Prince Albert I of Monaco, opened in 1910. The Museum is exemplary of Baroque Revival architecture. Prince Albert I immortalised the names of twenty famous oceanographic ships of that time, by having their names inscribed into the frieze of the Museum’s façade. Prince HSH Albert II of Monaco retains the passion of his ancestor, and inaugurated this unique exhibition ‘Immersion’. We bring you an exclusive ground report by Estelle Arielle Bouchet who visited Monaco. 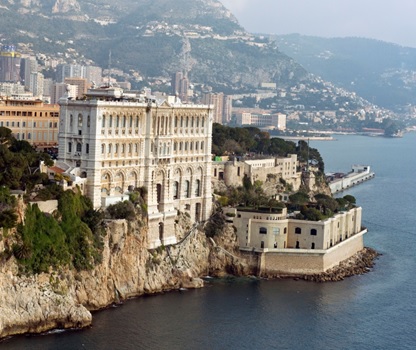 The peaceful view of the blue waters of the Mediterranean Sea, as seen from the open terrace of Blue Bay restaurant in the Monte-Carlo Bay Hotel & Resort, where I had a lavish breakfast meeting with Prince Michaël de Yougoslavie, set the tone for my next engagement of the day.

I decide to throw myself into a full “IMMERSION” for a dive into the Great Barrier Reef in Australia. What could be better, in a city flirting with the sea everywhere! This is where Prince HSH Albert II of Monaco has dedicated himself to the preservation of the Oceans through his namesake organization, Prince Albert II of Monaco Foundation. He walks in the footsteps of his ancestor, Prince Albert I, who earned himself the nickname “The Prince of the Seas” a modern Poséidon explorer, who in 1906 founded The Oceanographic Institute. HSH Prince Albert II, as the Honorary President of the Oceanographic Institute, has thus contributed to Monaco’s commitment to the Ocean by dedicating the Foundation to the public. The IMMERSION exhibition serves an important purpose, by showing the importance of the Oceans and creating the consciousness of the role the Corals of the Barrier Reef for life preservation, and our future.

HSH Prince Albert II of Monaco said, “Because of their vulnerability to acidification, because their importance in our global ecosystems (…) corals should today more than ever, be at the heart of our strategies”.

‘IMMERSION” exhibition is a dive into the underwater odyssey animated by a modern Jules Verne explorer ‘s Spirit. Just as Jonas ‘s initiatory Journey into the whale, the interactive path offers the opportunity to contemplate amazing fishes, their emotions, their interactions in a mysterious quietness and unusual scenography. Nora Matthey de l’Endroit has assumed brilliantly the delicate mission of the scenography and art direction with the support of the Scientists, offering thus a fantastic way to discover the Australian Sea and its fauna, the biggest ecosystem of the world, in the North East of Australia. With its 2300 km in length and 348 000 km2 in area, the Great Barrier Reef is the largest construction of animal origin on the planet. The small animals that are the great engineers of this are the reef-building corals. They secrete a calcareous skeleton, making them the principal creators of these underwater constructions. Commonly called “hard corals”, there are currently about 1600 species. Since 1981, the great Barrier Reef has been classified at a UNESCO World Heritage Site, joined in 2008 by the New Caledonia double barrier reef. 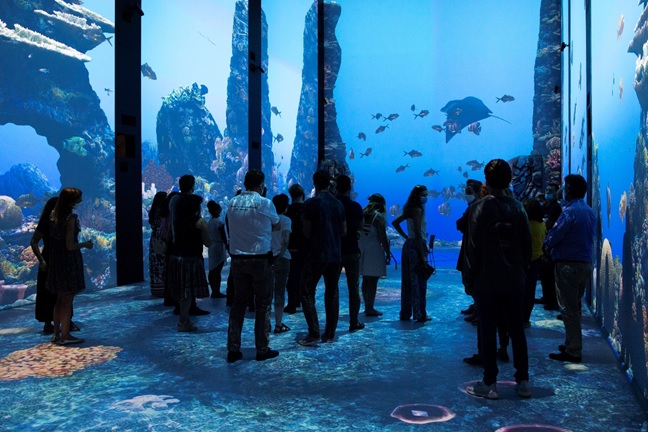 The Roman Civilization projected towards the sea has always attributed a relevant importance to Coral. The young  cherubic “putto” angel was represented with a branch of coral collar as a talisman and emblematic link to the Sea, symbol of Life as the Botticellian Venus coming to life from a shell embarcation on the Sea. Beyond the art visual language and the symbol of coral in its representation, the Scientists have laid the emphasis on the vulnerability of the coral, and the urgent necessity to preserve this barrier environment for the future of our Planet Earth. 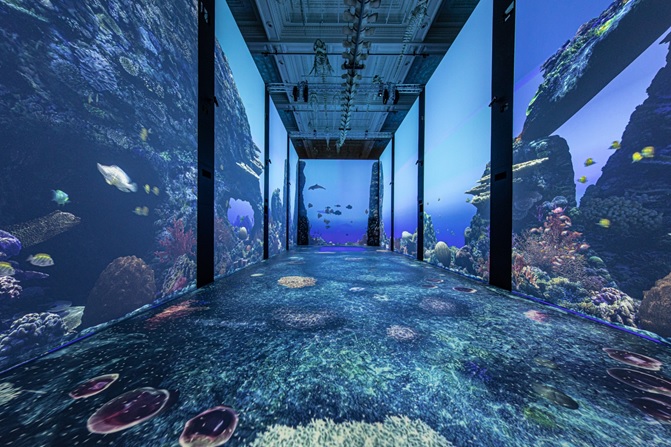 Besides the exhibition, the other attraction for a visit of the Oceanographic Museum is the  enchantment with its solemn classical architecture, its Cabinet de Curiosités, without losing yourself, admiring the view of the sea, you could be captivated by the charm of the song of the sirens.

Robert Calcagno, Director of the Oceanographic Institute, explained the new interactive installation, which is an entirely new format, never before offered at the Oceanographic Museum. He obliged with answering my questions.

In what way does the exhibition “Immersion” aim to sensitize the public to the fragile ecosystem of the Oceans ?

Robert Calcagno –  Since July 18, the Oceanographic Museum of Monaco has welcomed a very special guest : the Great Barrier Reef. One of the seven natural wonders of the world, is revealed in the IMMERSION exhibition. A multimedia installation offers visitors the opportunity to experience a dive to meet the iconic species that inhabit the largest coral ecosystem on the planet. IMMERSION is not just an exhibition ; it is a real immersive, interactive and collective experience, designed to raise awareness for the need to preserve our blue planet and its incredible biodiversity. While the coral reefs cover only 0.2% of the oceans, they are home to 30% of marine biodiversity. These oases of life, essential to humankind in many ways, are nevertheless threatened on a massive scale. The Oceanographic Museum invites as many people as possible to be privileged witnesses of the beauty and fragility of these ecosystems, on an original journey between fiction, emotion and reality.

This innovative concept was conceived by the Oceanographic Museum in order to offer an experience that combines the spectacular and the engaging, with an enhanced level of interaction and a unique sense of immersion. 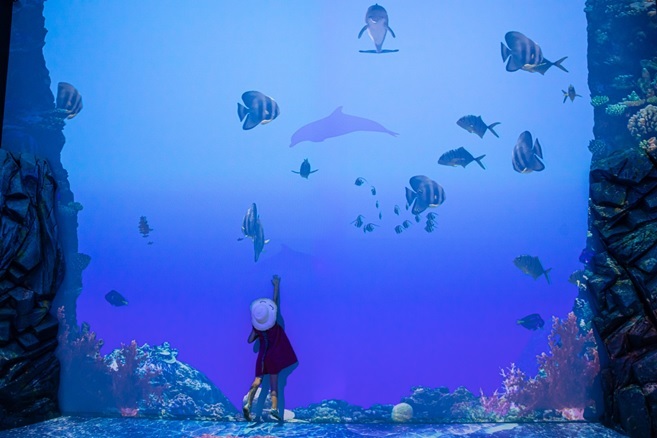 To give life to this underwater odyssey, the most advanced technologies are used to further the Museum’s mission of mediation: to create a link between humankind and an ecosystem that is generally inaccessible to it. This desire to push back the limits of what is possible, and also to offer to the greatest number of people an underwater world that is as majestic as it is threatened, is the legacy of Prince Albert I, nicknamed the ‘Prince of the Seas’ and founder of the Oceanographic Institute, Albert I, Prince of Monaco Foundation.

Does such a production- with around €2 millions investment- illustrate the Oceanographic Museum of Monaco vocation and will to firmly engage the Principality in the protection of the Oceans and the Environment?

Robert Calcagno –The Principality has been committed to protecting the environment for decades. Monaco and different major institutions involved in the understanding and protection of the oceans (Oceanographic Institute, Scientific Centre of Monaco, Prince Albert II of Monaco Foundation, Monaco Explorations) have joined forces to raise public awareness and take action to ensure the survival of coral reefs. High-level scientific research, organisation of conferences, political influence, media outreach, funding of NGO projects… The future of coral reefs depends on a combination of different forms and scales of action, and the Monaco Team is working on all fronts. Moreover, Monaco supported the preparation by the IPCC of the Special Report on the Ocean and Cryosphere in a Changing Climate, approved in September2019. This scientific consensus has been compiled by hundreds of international scientists and validated by States. It establishes the alarming diagnosis of the shock imposed on the ocean by global warming, and serves as a reference on which international mobilisation must be based.

Since mid-2018, Monaco has been co-chairing the International Coral Reef Initiative, an informal partnership between States and organisations aimed at preserving coral reefs and related ecosystems (mangroves and seagrass beds) around the world. This co-presidency is shared with Australia and Indonesia. In 2017, Monaco had already initiated the Coral Reef Life Declaration, to alert the international community to the importance and the urgent need to protect coral reefs. 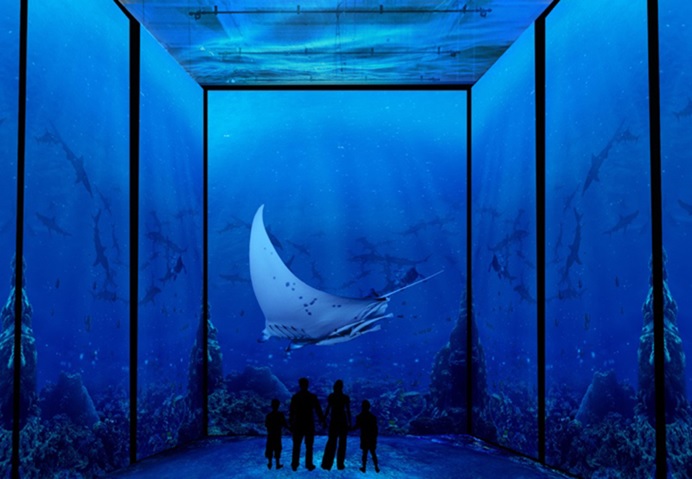 The IMMERSION exhibition is a first-of-its-kind 3D multimedia virtual reality show that replicates a divers’s view  of the Great Barrier Reef. The four-sided view in this marine installation is created with 40 projectors, to present the 3D computer-generated replicas of the Great Barrier Reef’s eight important species, like the giant clam, potato cod, Maori wrasse and white-tip reef shark. For accuracy of movements, behaviours and physical appearance of each animal, scenographers worked with Australian divers. The persons behind this project are the multimedia designers company ‘Dreamed By Us’, founded in 2018 by Olivier Ferracci and Nora Matthey de l’Endroit, renowned artist and multimedia engineer Emmanuel Mâa Berriet.

The 30 minute time lapse video rolls from day to night, to the sound of a whale song and reef sounds recorded by French bio-acoustician Frédéric Bertucci, which was mixed and put to an original score by composer Pierre Caillot 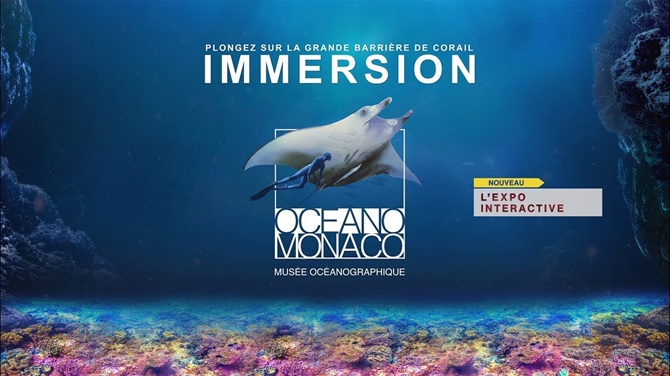 (Museum temporarily closed from November 3, 2020 due to Covid containment measures.)

Open every day (except the Formula Grand Prix weekend and December 25th)
Time –
10 am To 7pm: April, May, June, September
9.30 am to 8pm: July, August
10am to 6pm: January, February, March, October, November, December

Villa Gamberaia
When Love meets up Poetry in the

More than Fashion
prev next