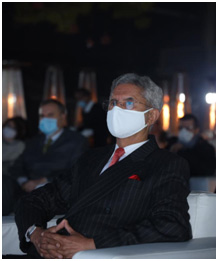 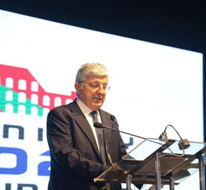 The Ambassador of Italy to India, H E Vincenzo de Luca, inaugurated the Festival of Italian Culture in India, in the presence of the Indian Minister of Foreign Affairs Shri S. Jaishankar and the Director General of the Indian Council for Cultural Relations, Patnaik. The event was hosted in the gardens of the Residence of Italy, set up for the occasion in full compliance with health safety protocols. This was the first physical event since the outbreak of the pandemic.

The rich cultural program presented will see an important focus on Dante Alighieri, on the 700th anniversary of his death: from the participation of

experts to the Jaipur Literature Festival, to musical, theatrical and cinematographic productions dedicated to the Divine Comedy. Building on the successes of past years, many activities will be dedicated to cinema and to the collaboration between creative industries. Italy will be present in the principle Indian film festivals and will promote innovative projects in the sector. A retrospective dedicated to Gianfranco Rosi and screenings of Pasolini and Rossellini’s documentaries dedicated to India are also scheduled for open-air cinema sessions. There will also be a rich musical program with live and online concerts. As far as design and fashion are concerned, an interesting project dedicated to increasing the presence of Italian fashion in India was illustrated, which will culminate in the second half of the year in an exhibition of Italian fashion inspired by India, to be hosted in an historic monument in Delhi.

An innovative project developed in collaboration with the Embassy of Brazil in New Delhi was also presented. Three groups of musicians, Canzoniere Grecanico Salentino from Italy, Bianca Gismonti from Brazil and the Maadhavan from India presented two unpublished collaborations of the Ronda and the Samba, created digitally.

Maadhvan closed the evening with a suggestive performance.

India – Diplomatic Nite 2016 hosted at The