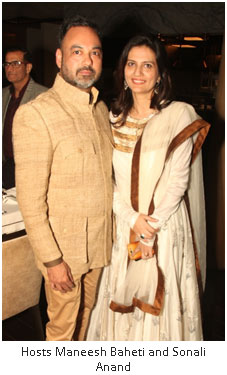 The 3rd edition of the Food for Thought Fest 2017, commenced successfully with many a new additions in place. The opening dinner was hosted by Maneesh Bahetiand Sonali Anand, the founders of South Asian Association for Gastronomy (S.A.A.G.), at Chi Ni, Roseate Hotels & Resorts, on the 23rd and the 24th of December. The event was attended by several high profile guests from the diplomatic community of the South Asian region, hospitality industry and the fashion fraternity of Delhi. Cricketer Suresh Raina and Bishen Singh Bedi, artist Kishen Chandar, Sanjay Kapoor of Genesis Luxury, FDCI’s Sunil Sethi were part of the guest list.

‘Food for Thought Fest’ has set a benchmark as a forum for conversations, cuisines and the exchange of ideas and philosophies. The participating countries include India, Bhutan, Afghanistan, Bangladesh, Sri Lanka and Nepal.The 2017 edition of the Food for Thought Fest brought in  exciting components such as talks and discussions around culture and cuisine. This was  in the “Thought Fest”, while the “Food Fest” offered cookery workshops with master chefs of the region and an authentic flavor from the participating countries, via their food stalls. Some of the best of the eateries from the regions participated. The new addition this year is the sprawling Gastronomy bazaar, and the Fun Fest held outdoors.