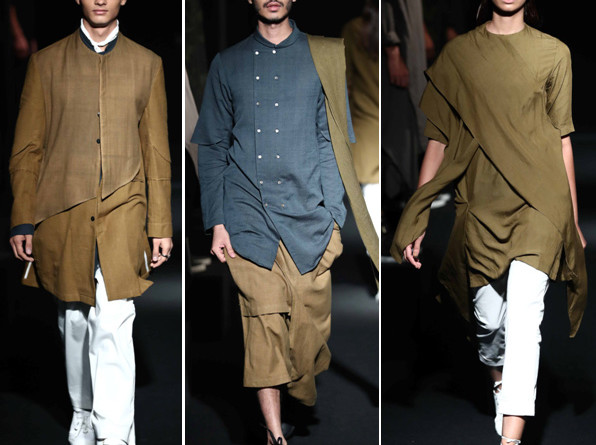 The fashion scenario in India started out with basic categories like men’s wear women’s wear and children wear. Then it moved to Indian and Western wear. These were further sub divided into formal, casual, resort/holiday, bridal and athleisure, categories. Now a new group classification for apparel styles has emerged, with names like Gender Bender or Gender Neutral, Gender Fluid, Agender, Pansexual, Transgender, Bi-sexual and is creating waves on the Indian fashion scene. Lakmé Fashion Week Winter/Festive 2018 brought a four-designer show devoted to this category, as well as several solo shows by designers who presented their versions of this fashion category that erased any defining parameter for male/female clothes. 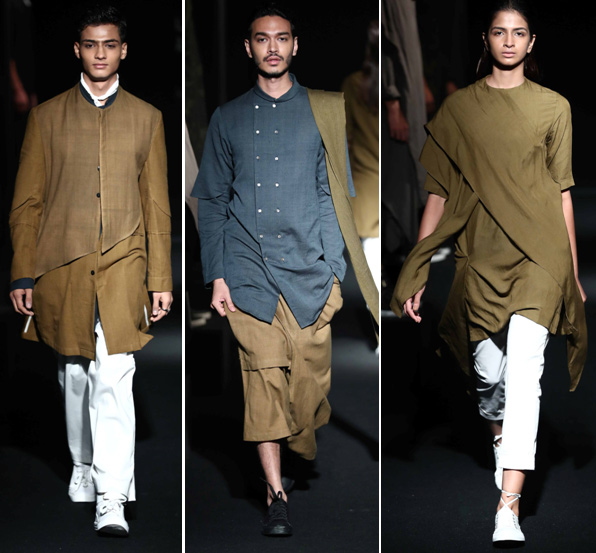 One of the first designers who hinted at a unisex look for garments was Ujjawal Dubey for his label Antar Agni at Lakmé Fashion Week Gen Next 2014 show. He not only changed the profile for men’s wear completely with drapes layers and asymmetric closures but also even suggested in future collections that his designs were male/female worthy. His “Begin” collection for Lakmé Fashion Week Winter/Festive 2018 was a message to break away and move into a rebellious vs. traditional state. The stylish festive daywear had some subtle prints to highlight Ujjawal’s favourite dark shades of black, navy and military green with a tinge of mustard, while the trademark deconstruction was very evident in the garments. The metallic embroidery, zips, multiple buttons and textured fabrics were a rare addition that detailed gently and highlighted the muted sombre colours for the androgynous garments. 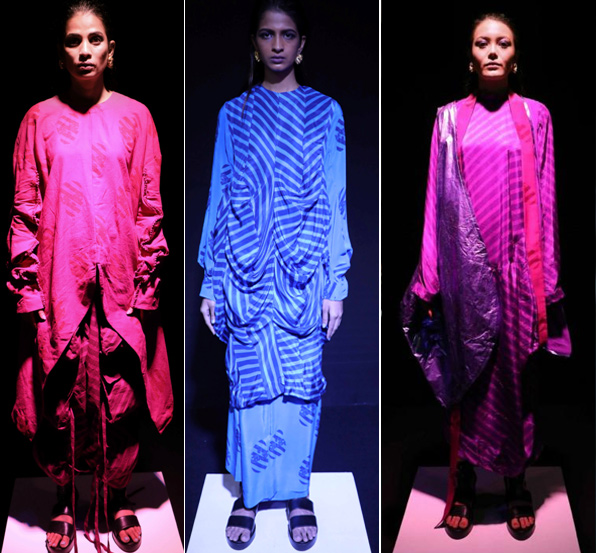 When Kallol Datta presented his label ‘Kallol Datta 1955’ at the Lakmé Fashion Week Summer/Resort 2007 Gen Next show, the audience immediately realised that an unconventional maverick had entered the fashion industry; who would not tread the tried and tested path. For Lakmé Fashion Week Winter/Festive 2018 at The Studio, his collection called “Volume 1 Issue 2” was an interesting fashion publication, once again with a deep social message. With a marked influence from the Middle East where he grew up, his silhouettes, which were inspired by the hijab, had intense detailing of giant cowls along with the mysterious tent-like or shroud like construction forms that appeared in extraordinary angles. 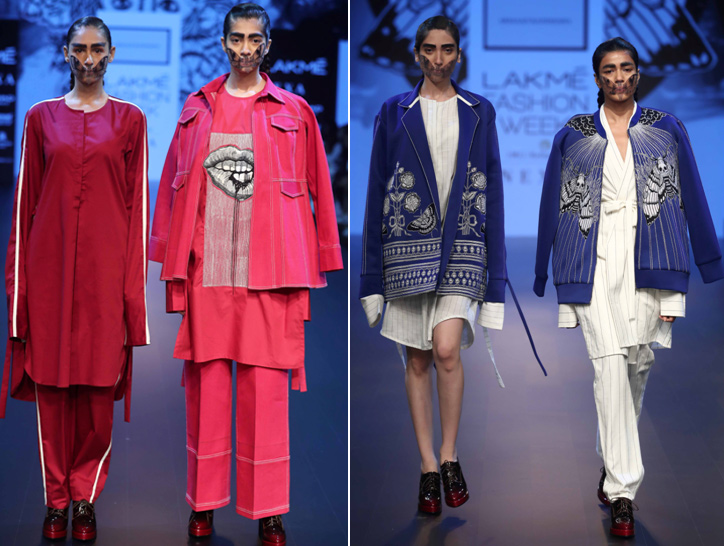 Armaan Randhawa known for his very strong and dramatic fashion statements had his “Twin Queen” Collection. It was an art presentation that paid rich tributes to the great British designer Alexander McQueen (1969-2010). Armaan has always believed in designing clothes with an androgynous touch for strong-willed women, so that they will be empowered with their sartorial choices to face the global challenges. Keeping the silhouettes boxy to stay true to the theme, there was Armaan’s trademark embroidery that gave a cutting edge look to the collection. The construction almost bordered on masculine touches as bomber jackets; sweat shirts and over sized trench coats kept the inspiration on an even keel. 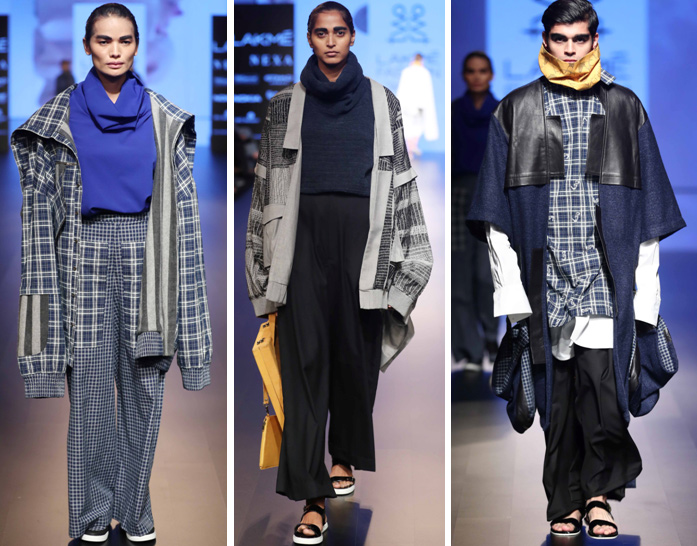 When Anvita Sharma unveiled the label ‘Two Point Two’ during the Gen Next show at Lakmé Fashion Week Summer/Resort 2018 it was one that spoke a language all its own with an edgy collection gender neutral touch.  For the coming season it was the Japanese Kimono that was the inspiration for the garments called “Simultaneity”. While the silhouettes had the distinct imagery of the Far East; there were touches of the relaxed sporty look with 100 per cent Merino wool, cotton suiting, poplin and wool suiting fabrics, along with hand knits and touches of leather. The oversized checked/striped kimono jacket and checked pants with cowl neck blouse clearly kept to the theme of the show and confirmed the Agender bio-sexual concept. 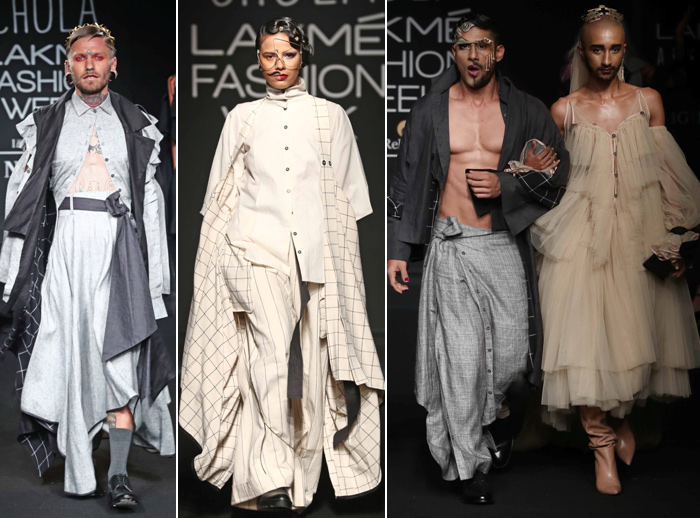 The Chola label by Sohaya Misra has always advocated oversized, extreme, layering with androgynous silhouettes since her first showing at Lakmé Fashion Week Summer/Resort Gen Next 2016 show. For the coming season Sohaya presented “Bye Felicia” and this time pushed the gender fluid concept aggressively with transgender, female and male models, bi-sexual makeup and hairstyles. With such an esoteric theme, Sohaya ensured that the garments lived up to the title but leaned towards the drag culture and the gender-neutral genre. There was a hint of self-exploration in the way, the apparel offered comfort, spirituality or transvestic fetishism. Linens, recycled and organic cotton were transformed into edgy pieces with clean lines. With hardly any distinction between men’s and women’s wear there were cropped tops, cold-shoulders, frilly jackets and draped pants. 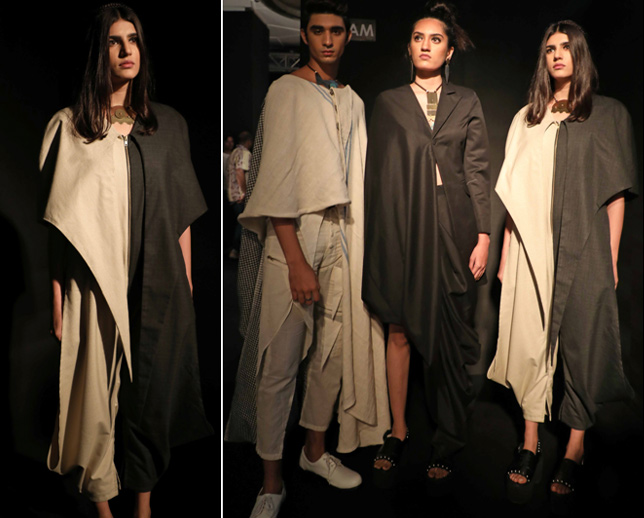 Keeping true to his gender-neutral fashion sensibilities ever since he first unveiled his label at Lakmé Fashion Week Gen Next Winter/Festive 2017 show, Sumiran Kabir Sharma’s ‘Anaam’ brand had made critics take special note of his Agender creative path. The “Behrupiya” that inspired his collection was a look that moved smoothly between sexes. As always, Sumiran’s garments had many lives and forms, so he ensured that his current collection would appeal to buyers who are as free spirited, expressive and Avant Garde as his inspiration. 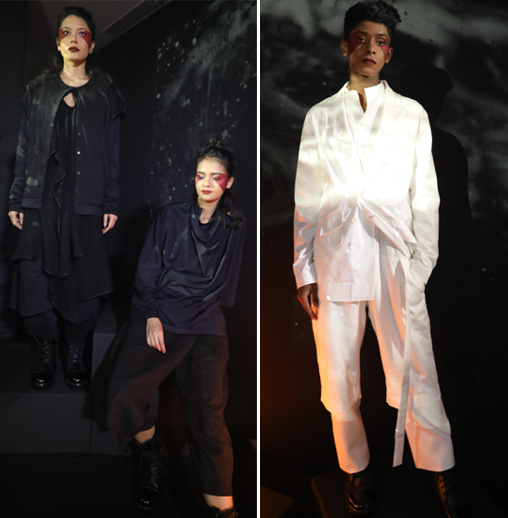 For Akshat Bansal the environment, nature and biological effects have always been of utmost importance ever since he presented his ‘Bloni’ label at Lakmé Fashion Week Winter/Festive 2017 Gen Next Show. Akshat’s collection once again sent out a strong social message with his “Neutral Human” collection. Akshat presented equality and regenerate gender norms along with his aim for neutral sustainability that sent a tough message to eliminate plastic. Akshat therefore selected econyl, wool, organza and worked with tie and dye, as well as ombré dyeing. The mainstay of the collection was the indigenous techniques that were cleverly merged with western silhouettes to offer a gender-neutral line of clothing. 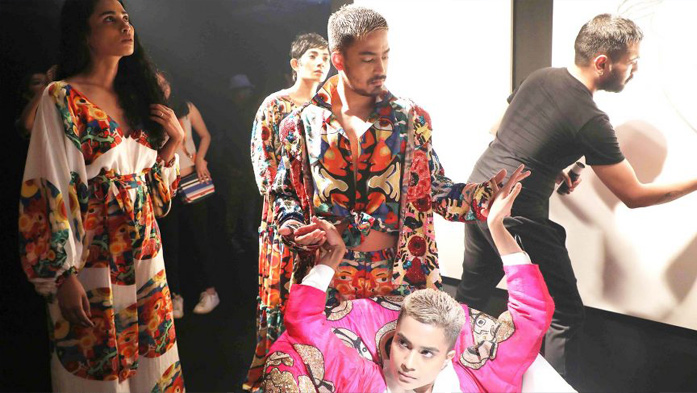 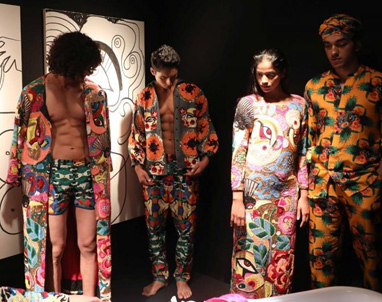 When the ‘Bobo Calcutta’ label by Ayushman Mitra unveiled its collection last season during Lakmé Fashion Week Summer/Resort 2018 Gen Next Show, it was a riot of ultimate, graphic, embellishments that amazed the audience.

This season Ayushman’s ‘Bobo Calcutta’ brand with the quirky title “Ludicrous Legacy” hoped to communicate the fun element of making individual choices, and ludicrous legacies that are left behind. The total clash of fabrics and colours was the highpoint of the collection, as the heavily multi-coloured, embroidered, tunics, shorts, coats, and cowl neck shirts, caused a colour riot. The sequinned dress layered with a light, flowing jacket, both floor length were in intensely, hued, abstract, motifs were ideal Agender options.

The Pot Plant by Resham Karmchandani and Sanya Suri 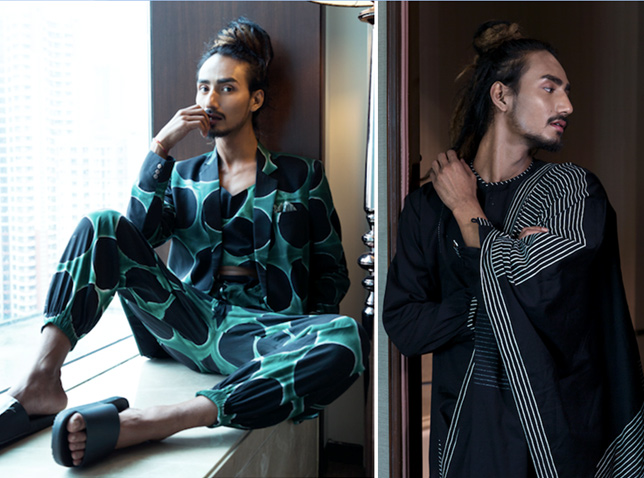 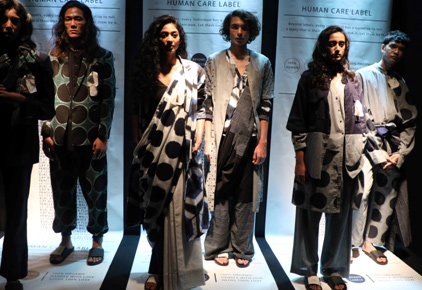 When ‘The Pot Plant’ label by Resham Karmchandani and Sanya Suri made its debut at the Gen Next show Lakmé Fashion Week Summer/Resort 2017, their fuss free, zero waste, collection was an intriguing gender fluid line. ‘The Pot Plant’ once again displayed this season easy separates and coordinates called “100% Human” but ensured that they were not static within the gender norms. Inspired from by-lanes of Bhuj, the colour card was navy, grey, green and white with gender-neutral drapes in Khadi and Chanderi blends. The kedia angarkhas were striking with oversized circles and multiple lines as well as the draped pant sari. Clamp dyeing, Bandhani and hand painted surface ornamentation signalled that fashion needed to move out of the constrained areas but should remain true to craft and garments that stayed away from gender specifics.