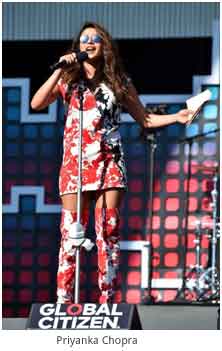 The finale of the sixth edition of the 2017 Global Citizen Festival was held on Saturday, September 23, the 2017 on the Great Lawn of New York’s Central Park. This was culmination of Global Citizen Week, a series of more than 30 public, advocacy-driven events and digital activations that took place across New York City from 17th – 23rd September and reflected the international advocacy organization’s continued effort to engage people in the movement to end extreme poverty.  This was a cumulative effort by world and business leaders, non-profit organizations, socially conscious artists, and thousands of Global Citizens united to further the world’s progress toward achieving the Global Goals for Sustainable Development and ending extreme poverty by 2030.

The Festival featured headlining performances by Stevie Wonder, Green Day, The Killers, The Lumineers, and featuring the Chainsmokers, with special guest performances by Pharrell Williams, Big Sean, Andra Day, and Alessia Cara.More than 60,000 Global Citizens attended and millions watched live through premier broadcast partner MSNBC and online via YouTube and Twitter.Ahead of Global Citizen Week, Global Citizens took 1.6 million actions over two months that secured 29 commitments, 55 announcements and 13 calls to action, totaling $3.2 billion, which are set to affect the lives of 221 million people. 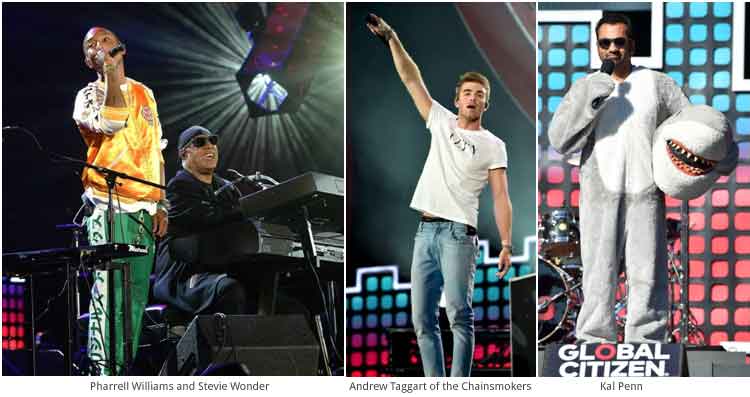 Together, these commitments and announcements are worth $3.2 billion, and are set to reach 221 million people, and put the world on track to achieving the Global Goals for Sustainable Development. Global Citizens will continue to use these commitments to hold governments and businesses accountable to deliver on their promises in the years to come.

– ECONOMIC EMPOWERMENT: Accenture, Citi, Ernst & Young, and Procter & Gamble each committed to source $100 million from women-owned businesses — a majority of whom will be based in the developing world. This $400 million commitment will be delivered through our partners at WE Connect International, bringing to $1 billion the total that has been committed on the Global Citizen stage from corporates towards women’s economic empowerment in the past 12 months.

– HIV/AIDS: Global Citizen partners Johnson & Johnson commits to accelerate the healthcare company’s HIV vaccine and announced that for the first time it is going into late stage human clinical trials. It is the world’s first ever “global” vaccine, which means it can protect against all strains of HIV. In early stage studies the vaccine has shown 100% success rate.

– FAMINE: U.S. Senator Chris Coons (D-Delaware), as a member of the Appropriations Committee announced that encouraged by Global Citizens taking over 60,000 actions, his colleagues in the Senate have proposed $311.5 million more in funds for International Disaster Assistance compared to last year.

– YAZIDI JUSTICE: Three years since the genocide was committed by ISIS, UK Permanent Representative to the UN, Matthew Rycroft, announced that the UK led the UN Security Council to a unanimous vote this week on the decision to set up a UN Investigation Team to pursue justice for the Yazidis. The UN resolution on ISIS accountability was described as a “long overdue first step” by the UN Office for the High Commissioner on Human Rights. This comes after an 18 month campaign and over 100,000 actions taken by Global Citizens.

– FRANCE: As a result of Global Citizen’s two year long campaign, and nearly half a million actions, including those of Global Citizen and Global Partnership for Education Ambassador Rihanna, French President Emmanuel Macron announced that for the first time ever a G7 country — France — was to co-host the Global Partnership for Education replenishment with an African country — Senegal in order to raise $3.1 billion to provide 870 million children with vital education. 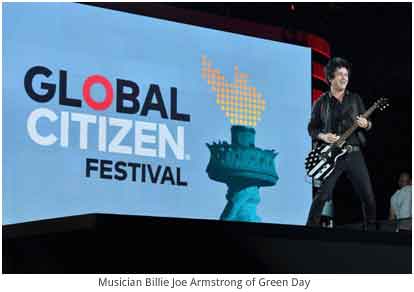 – GHANA: President of Ghana, Nana Akufo-Addo, committed on the Festival stage to end child marriage. The newly elected President inherited the initiative to end child marriage in the country from his predecessor, so this stage moment provided confirmation that the new president has officially committed to continue with the National Strategic Framework on Ending Child Marriage in Ghana. As part of this announcement, the President also reaffirmed his pledge to provide universal free secondary education.

– FAMINE: Executive Director of the World Food Program, David Beasley, confirmed that $575 million of $990 million committed by Congress in May — a commitment helped by 49,291 actions taken by Global Citizens — has been released to the WFP and others to immediately fight the famine. He then issued a powerful call to action to Global Citizens, revealing that after years of progress, the number of hungry people in the world is going up. 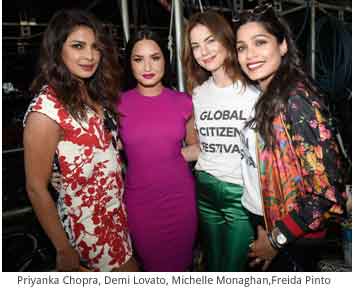