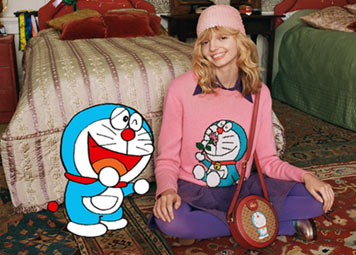 To honour and celebrate the Lunar New Year (Friday 12th February 2021), which heralds the Year of the Ox, Gucci’s creative Director Alessandro Michele has imagined a dedicated collection of special items that feature Doraemon, the famous Japanese Manga character.

Doraemon x Gucci is a new collaboration by the House and the recognisable cat-type robot of Japanese manga fame. Doraemon was sent back in time from the 22nd century by Sewashi (Nobita’s great-great-grandson) to help the young boy Nobita Nobi, who Sewashi helps by improving his life. Friendly, Doraemon possesses a four-dimensional pocket from which he pulls out various secret gadgets, from a future department store.

The Doraemon x Gucci Collection has its own dedicated packaging, which comprises green bags and matching swing tickets and cards, all featuring either the blue Doraemon or brown ‘ox’ Doraemon; the swing tickets reference the 50th anniversary of the cartoon.

For the Doraemon x Gucci Collection, Doraemon appears in the character’s classic blue colour, and is also playfully disguised as an ox, in tribute to the Year of the Ox. Here, blue is replaced by golden tones, and two little horns have been drawn on Doraemon’s head as part of his makeover. These two figures are featured in different poses over a GG motif, either in a repeat design, or singly, to create two new patterns for the House.

A new version of the GG Supreme canvas has been developed to feature Doraemon for the Doraemon x Gucci Collection, for use with shoes, luggage, handbags, small leather goods and hats. The archival GG House pattern is now augmented with either an all-over or a single print of Doraemon, in either blue or brown. All styles are trimmed with red leather, and the resulting look has a vintage spirit.The products are distinguished with an internal red leather tag with gold lettering detailing the ©Fujiko-Pro copyright notice.

Finally, two fun and sporty Gucci Dive watches feature dials replicating the look of Doraemon on the iconic GG Supreme canvas. Both of them have a GG Supreme-canvas-look leather strap. One watch presents the original Doraemon x Gucci blue character on the dial and is dedicated to the 50th anniversary of the cartoon, while the other features the cat in an ox disguise in brown on the dial to celebrate the Year of the Ox.

India – Nayaab at The Lodhi does it

India – The Claridges sets up the Opulent

India –Designers and Models work at fittings for