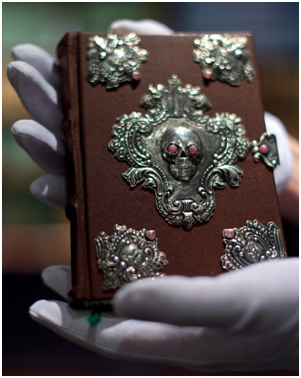 Just two decades old, and already Harry Potter’s memorabilia is sought after by collectors. Up for auction at Sotheby’s London on 13 December 2016 is a rare presentation copy of The Tales of Beedle the Bard, created, hand-written and illustrated by JK Rowling, containing a personal inscription by the author to the editor who launched her career.It might be of interest to note that The Tales of Beedle the Bard is estimated to reach £300,000-500,000.

Smart girl J.K.Rowling produced 7 copies, and this is the copy number 3, which she presented to British publisher Barry Cunningham, who famously accepted the first Harry Potter book for publication. The copy holds considerable special significance, as Cunningham played an instrumental role in launching J.K Rowling’s career as an international best-selling author. In a dedication written in the front of the book, JK Rowling wrote: “To Barry, the man who thought an overlong novel about a boy wizard in glasses might just sell… THANK YOU”. Cunningham recalls the experience of receiving the copy on 12 December 2007 as ‘unreal’, becoming ‘progressively more exciting’ as he opened a white jiffy envelope to reveal a beautiful, cloth-wrapped manuscript book, adorned with semi-precious stones and a sterling silver mounted skull. 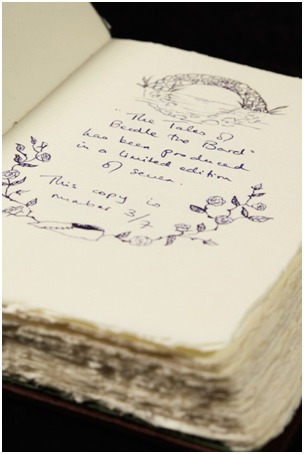 What is more exciting it that the original packaging, in which the copy was delivered, is included as part of the lot. Originally presented as a personal gift to ‘those most closely connected to the Harry Potter books’, the manuscript of wizarding tales is one of only seven unique copies produced for the most important people in Rowling’s life during this time. In 2007, a seventh copy produced specifically for sale at auction to raise money for J.K Rowling’s charity Lumos, was sold at Sotheby’s for a record-breaking £1.95 million.

Bound in brown morocco leather, the manuscript carries seven unique mounted rhodochrosite stones. At the end of the volume, the author notes that these semi-precious stones are ‘traditionally associated with love, balance and joy in daily life.’ The exterior is additionally embellished with hallmarked sterling silver ornaments, centred by an ominous skull.Containing clues that were to prove crucial to Harry Potter’s final mission to destroy Lord Voldemort’sHorcruxes, The Tales of Beedle the Bard is a volume of five wizarding fairy-tales left to Hermione Granger by Albus Dumbledore in the seventh and final book, Harry Potter and the Deathly Hallows. Only one tale, ‘The Tales of the Three Brothers’ is recounted in the book. 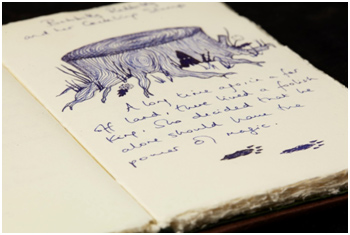 Dr. Philip W. Errington, Director, Sotheby’s Books and Manuscripts Department said, ‘The personal resonance of this book makes this both an exceptional and highly desirable object to come to auction. It is particularly special as it is only one of six made for those closest 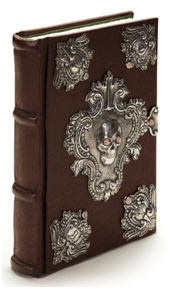 to the author throughout the journey of creating the Harry Potter series, gifted to the man who recognised the brilliance of J.K Rowling’s writing and her potential impact on children’s literature.’

EXHIBITION DATES: The book will be on view at Sotheby’s London from 9 December to 13 December