Some interesting points of discussion are as follows.

– Two-thirds of India’s 1.3 billion population is under the age of 35. This digitally savvy and dynamic era is changing retail consumption patterns of the fastest growing economy globally

– Like other emerging markets of China and Brazil, India is increasing its contribution in the $2.2-trillion global luxury market. Estimates suggest that the Indian luxury market is over $18 billion and is growing at a CAGR of about 25% and has the potential to reach the $100 billion mark in the next 7-8 years

– According to global consultancy Knight Frank, India’s ultra-high net worth individuals count rose by 340% in 2016 to 6,020 while global growth was 61% to 187,468. By 2025, the country is expected to account for 5% of total UHNWI population and 6% of the billionaire population across the planet

– International brands have not only started collaborating with Indian designers, but have also introduced India specific products and designs. Some examples are: 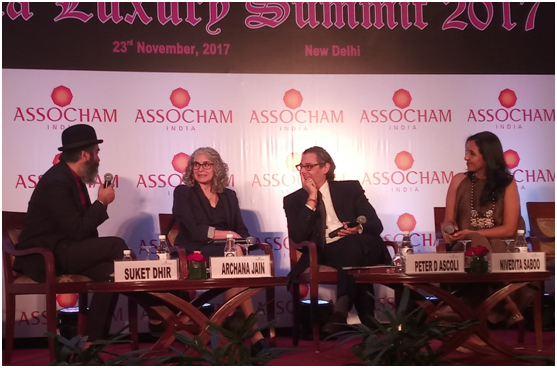 – The wedding industry is undoubtedly the biggest consumer of luxury goods and services. The country’s $ 40 billion bridal wear industry is arguably the most expensive in the world with an average heavy wedding outfit created by a top designer costing anything between $ 50,000 – 100,000

– Seventeen International lifestyle brands have entered India in the last 6 months at a time when the international growth is nearly stagnant.