Set along the French Riviera in the Principality of Monaco, helmed in by the Alpine slopes and the saphire blue waters of the Mediterranean sea, Monte Carlo is the glamorous playground of the rich and famous. In an exclusive for The Luxury Chronicle, Estelle Arielle Bouchet met up with the charming Prince Michaël of Yugoslavia at the Michelin starred Blue Bay restaurant in the Monte-Carlo Bay Hotel & Resort, to find out about his interests and life.

It is in Monte Carlo, at the Monte-Carlo Bay Hotel’s sumptuous terrace facing the Mediterranean Sea, that I am to meet my friend, Prince Michaël of Yugoslavia. The one I briefly nickname ‘Prince Michel’, is the epitome of aristocratic politeness and always punctual. Our meeting is set up at 9 AM in the Blue Bay restaurant overlooking the deep blue waters of the Mediterranean, amidst its luxurious scented tropical gardens that are lush in this perfect climate of the region. The morning light is already bright, just as the photographer-Prince likes it, but on that, we will talk later… 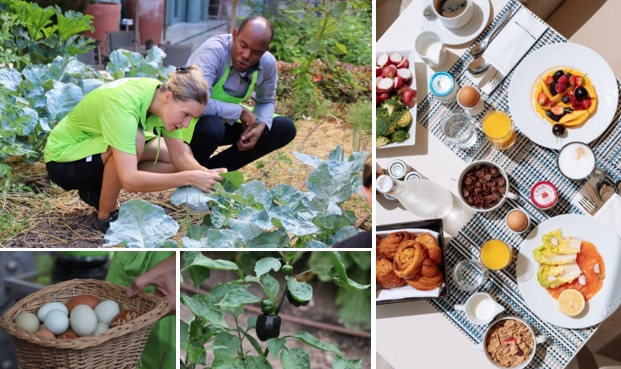 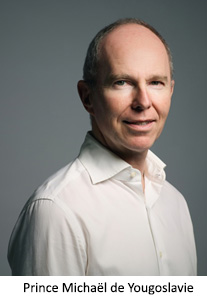 The Blue Bay restaurant is the domain of the Michelin starred Chef Marcel Ravin, who is a native of French West Indies. Every morning, Chef Ravin collects his fresh supply of fruits, vegetables, and herbs from the hotel’s garden. His refined cuisine and different style of cooking showcases the ancestral knowledge that he has acquired from his grandmother.

As for Prince Michaël de Yougoslavie, he and his twin brother Prince Dimitri of Yugoslavia were born on June 18, 1958, in the zodiac sign of Gemini. So it is under the auspices of Mercury in Gemini, which bestows on him the gift of sharing and communication that he expresses through his photography art. Prince Michel is descended from two European crowns. Through his mother, Maria Pia de Savoie, he is the grandson of the last Italian king, Umberto II and of his bride, Queen Marie Josee de Belgique. Through his father, Prince Alexandre de Yougoslavie, he is descended from different Yugoslavian, Greek, Danish, British and Russian kingdoms. Apart from this impressive genealogy, Prince Michel is before anything else, an aesthete, and an artist

Photography is his mode of expression and in this way; he joins the Monaco tradition of Photography along with such well-known figures as Helmut Newton, Karl Lagerfeld, who took it into their heart to interpret this microcosm of the Principality as viewed through their own prisms. The great Karl was very fond of the Beach Club, overlooked by his Villa “La Vigie”, where he used to feature portraits of the great figures of the Principality. 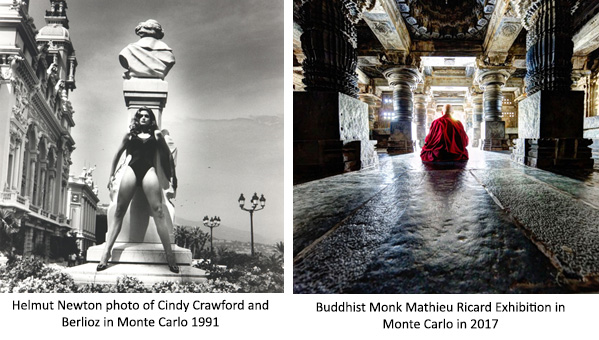 The Berlin-born Australian Helmut Newton loved to photograph these seaside Venuses, modern Amazons against the green vistas of Monte Carlo. At the instigation of Princess Caroline de Hanover, he too yielded to the asceticism of the Ballets of Monte Carlo. This was quite a challenge for someone who had never captured the skills of dancers before!

Monaco also welcomes photography exhibitions, and this is how the Buddhist monk Mathieu Ricard exhibited in 2017 ; and before him photographers such as the Britisher David Bailey, considered the father of the portraits, once married to Catherine Deneuve from 1965 to 1967. 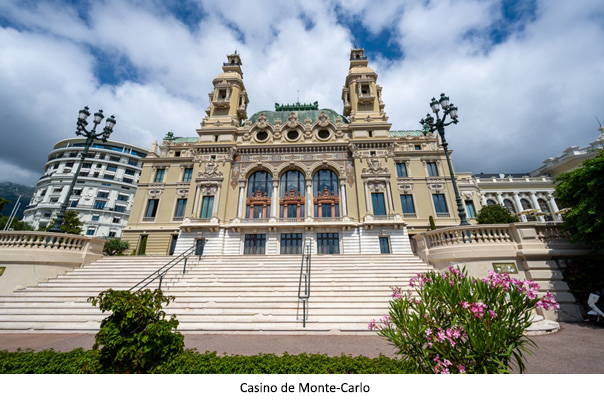 As for Michel, his work is part of a very structured interpretation, often architectural and whose symmetry is part of a long classical French tradition. In fact, Michel was raised in Versailles, where he used to visit with his mother, the palace gardens of his ancestor, King Louis XIV. This is how the young Prince Michel formed his artistic taste. We can find in his work the symmetrical and classical arrangement specific to the era of the Sun King. 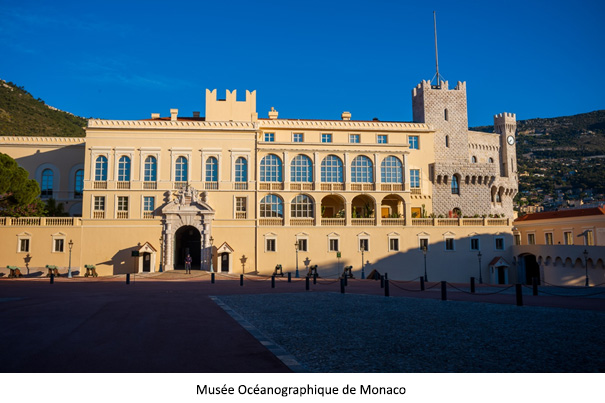 Sometimes his work internalizes towards a more intimate dimension in harmony with Nature, or ventures to the Art of Portrait, which he has only recently initiated. During this confinement, Michel trained himself to wake up at 4 o’ Clock  in the morning to capture the first sunrises above the Principality. He loves the delicate and powerful dawns, as they only exist on the Mediterranean shores. This ‘seeker of light’ likes to take those long strolls and lets himself be carried away by the emotion of a Mediterranean landscape.

Prince Michel said, “When I take a photo, I first feel the emotion, I gaze at it and this makes a photo”. 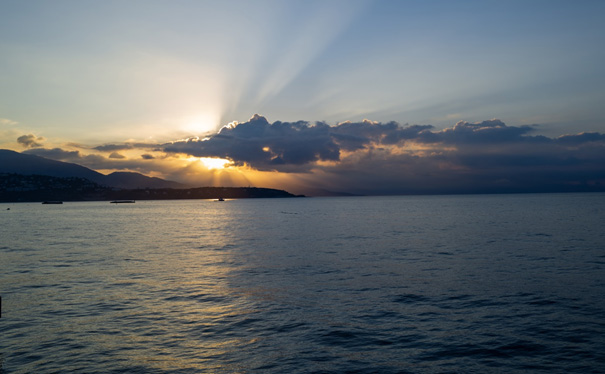 Friend of the Sovereign Prince Albert II of Monaco, just as his father Prince Alexander of Yugoslavia was a friend of Prince Rainier, Prince Michel maintains a real emotional relationship with the Principality where he now resides. Prince Michel admires the causes of the Sovereign Prince Albert II, who is in favor of the Oceans and the Bio Diversity that he maintains and upholds in the Principality through well thought-out agriculture and targeted actions for protection of Nature and its ecosystems.

“I love being by the seaside, with this exceptional luminosity and vegetation, this proximity to the Alps, the Alpilles, with Italy on the East and France on the West,” he said. 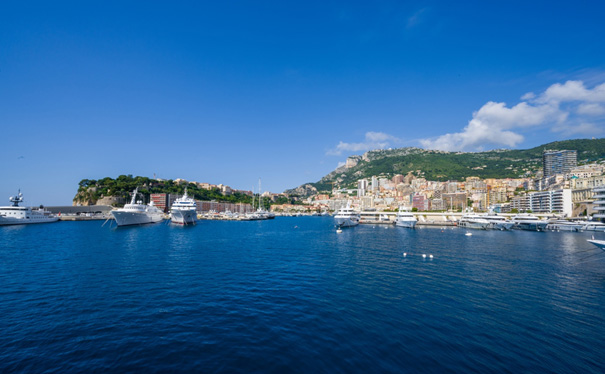 In a symbolical way, the Principality of Monaco creates a ‘go-between’, a tight link between France and Italy from where Prince Michel de Yougoslavie is himself descended.

In love with this Mare Nostrum and light, Prince Michel will keep us enchanted through his photos with these Mediterranean views, its glorious structures, last bastions of a refined and vulnerable world that you can contemplate not without some nostalgic reverence. In the style of these travelers of the “Grand Tour”, Prince Michel offers his vision of a ‘Mediterranean in Light’ for our greatest delight. 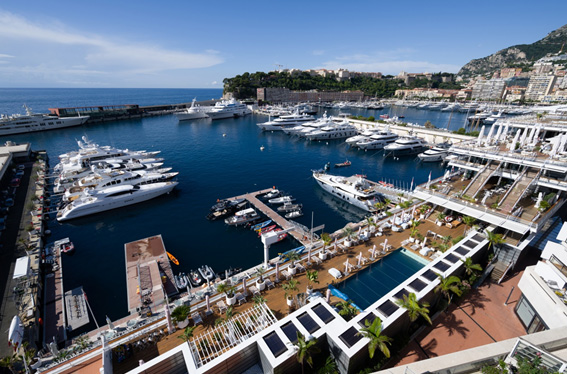