One of the most beautiful gardens of Italy belong to the historic Villa Gamberaia whose long terraced slopes hang softly over the city of Florence, and the mirror-like pools of its famous parterre d’eau reflect the ever-changing moods of the Florentine sky. Its unique garden plan and setting in the Tuscan landscape have been studied and celebrated by architectural historians and garden designers throughout the centuries. 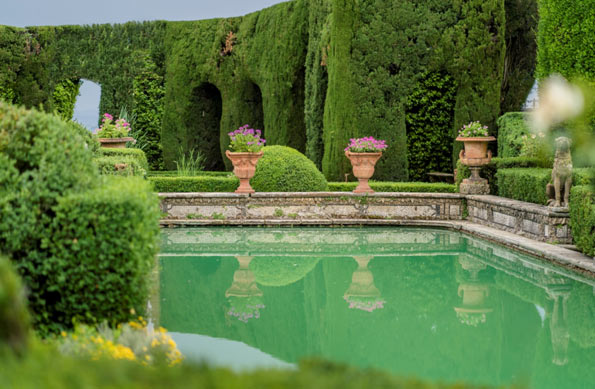 At the turn of the twentieth century, Villa Gamberaia was home to two artists: Princess Jeanne Ghyka, sister of Queen Nathalie of Serbia, and her American companion Florence Blood. It was under Princess Ghyka’s loving care and vision that Gamberaia became the enchanted place to which a privilege few were invited, a private and exclusive retreat to European royalty, diplomats and art connoisseurs. In 1896 and again in 1898, the poet Gabriele d’Annunzio visited the Gamberaia, recording in his journal its mysterious charm and imagining it as the stage set for his dramas. In the following years, he lived not far away at the Capponcina, just across the road from his beloved Eleanora Duse. From its origins in the early 1600 to the present, it preserves the cherished memories of all who have lived here or visited, a place of both worldly beauty and spiritual wonder. 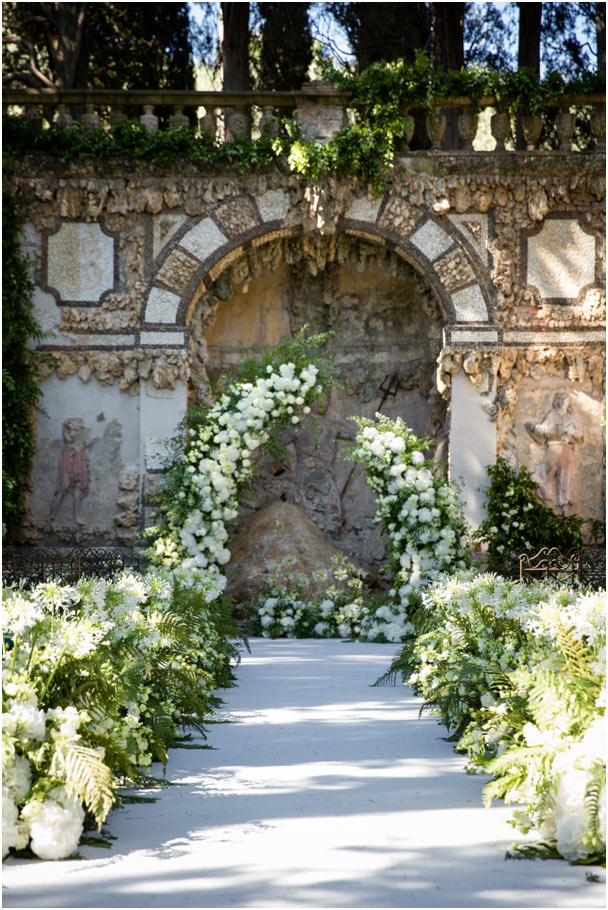 What else does one desire if one decides to marry or to celebrate in Tuscany? What more could one want than this feeling of “plenitude” in such a remarkable location? Having spent plenty of time in this enchanting space, I can testify that Past and Present tend to merge here in a magical dimension, evoking a kind of Eternal Eden. 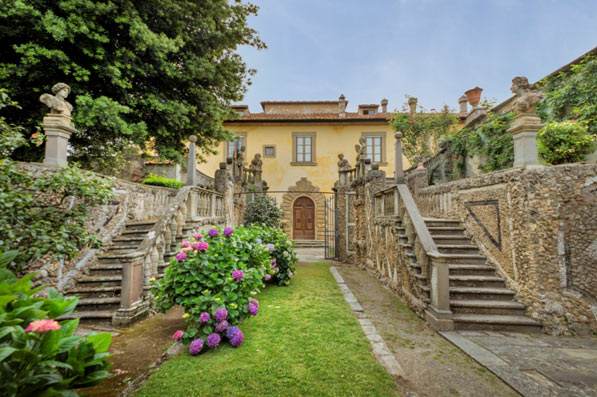 Today it is a joy to consider that persons from around the world now have the opportunity to celebrate their marriage, or renew their vows, in the chapel of Gamberaia or in its fragrant green gardens or spend a holiday in the guesthouses of the property. Hosts will enjoy a refined Tuscan dinner on the terrace overlooking Florence, where the stunning view is framed by statues of urns and hunting dogs, set in sharp relief against the dramatic sunsets of the City of the Medici. Located at just a fifteen-minute drive by car,it offers the wonderful art treasures of the city as well to other villas and gardens in the vicinity. 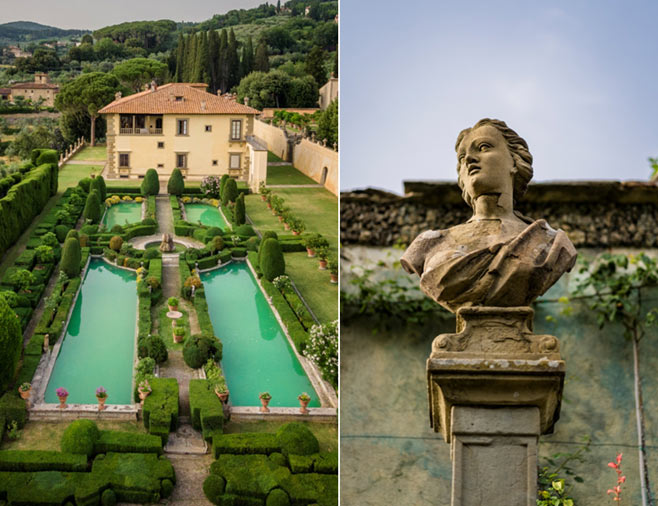 The Villa Gamberaia brings all these memories where love and transcendental beauty are leitmotifs… Villa Gamberaia still retains the original plan of a terraced garden to the early 17th century. The setting and layout were praised by Edith Wharton, who saw it after years of neglect, when its former French style parterre had been turned into a flower and vegetable garden; and by Georgina Masson, who saw it restored by Sig. Marcello Marchi after its near ruin during the Second World War to the immaculately clipped and tailored condition today. Today Villa Gamberaia belongs to his son in law, Luigi Zalum, husband of the late Franca Marchi, Marcello’s daughter and to Luigi and Franca’s children. 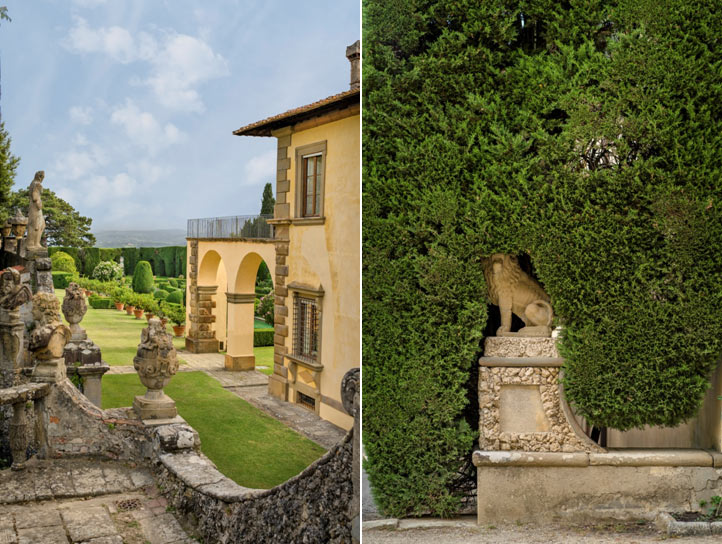 Set high upon the crest of the hill, the Gamberaia stands above the adjacent agrarian countryside. Its terraces are filled with simple but elegant architecture and a variety of greenery. Entering through its gates, one is struck by its other-worldliness, the surreal character of the enclosed space. One cannot fail to admire its beauty, to feel its grandeur, to marvel at its intimacy and to puzzle over the harmonious assemblage of separate garden spaces. The siting and composition, created by Lapi family in the early 1600s, further refined and embellished by their successors, the Marchesi Capponi , is a simple yet subtle lesson of garden design, perfectly integrated into the Tuscan landscape. On the highest level, the lemon house and terrace with its delicious and fragrant lemon trees overhang the main level with its formal arrangement of garden rooms. Below the lowest terrace the olive groves extend far into the valley eye.

THE SURROUNDING COUNTRYSIDE AND BORGO 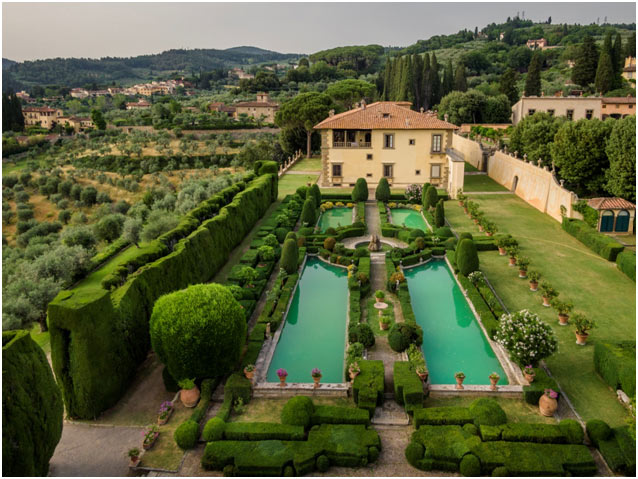 The village of Settignano is a picturesque village situated on a hillside northeast of Florence, Italy, with spectacular views. The little borgo of Settignano carries a familiar name for having produced three sculptors of the Florentine Renaissance, Desiderio da Settignano and the Gamberini brothers, better known as Bernardo and Antonio Rossellino. The young Michelangelo lived with a sculptor and his wife in Settignano—in a farmhouse that is now the “Villa Michelangelo“— where his father owned a marble quarry. In 1511 another sculptor was born there, Bartolomeo Ammannati. It was the stone quarries of Settignano produced this remarkable series of sculptors. 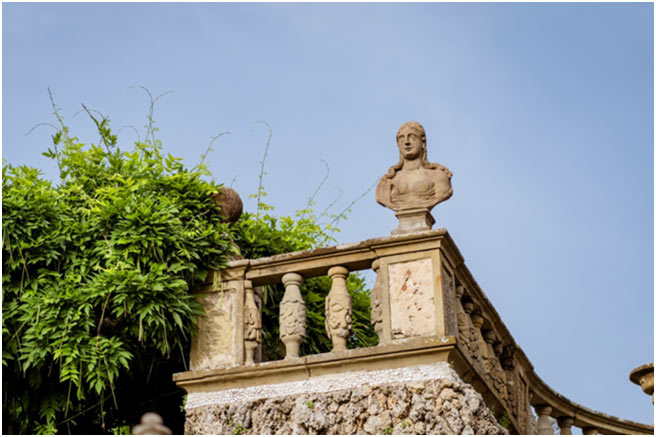 Roman remains are to be found in the borgo which claims connections to Septimus Severus — in whose honor a statue was erected in the old square in the 16th century, destroyed in 1944- though habitation here long preceded the Roman emperor. Settignano was a secure summer resort for members of the Guelf faction of Florence. Giovanni Boccaccio and Niccolò Tommaseo both appreciated its freshness, among the vineyards and olive groves that are the preferred setting for even the most formal Italian gardens.

And the Villa Gamberaia reigns in a tribute to Love and Poetry!

It offers a fantastic opportunity for an unforgettable celebration or holiday.