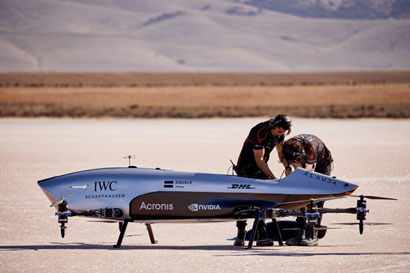 IWC Schaffhausen joins forces with Airspeeder, the world’s first electric flying car racing series, in a new engineering and timekeeping partnership. Combining the passion both companies share for technological progress, human endeavour and sustainability, they will work together in pioneering this new form of motorsport to fast track a new era of clean-air mobility. 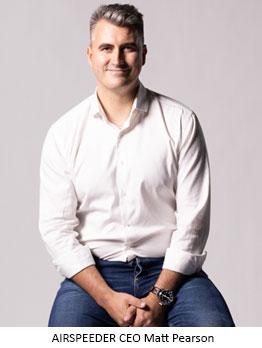 in advancing the cause of technology, Pearson’s visionary idea is to create a new kind of motorsport to accelerate the advanced air mobility revolution and transform passenger, logistical and even medical transportation. The planned global race series will eventually see a full grid of eVTOL (electric Vertical Take-Off and Landing) craft, manufactured by Alauda, managed by individual teams and operated by elite pilots, compete at heights of up to 40m off the ground and at top speeds of 200km/h. The air races will take place on electronically-created tracks and be streamed globally, minimising the environmental impact of more complex logistics and infrastructure.

“It’s fantastic to play a part in bringing Matt’s bold vision to life. The Airspeeder team are true pioneers of aviation and they are bringing together two things that are really close to IWC’s heart. From making some of the planet’s best pilots’ watches for the last eighty years to the cut and thrust of modern automotive design and racing, we have always equipped and inspired those who dare to dream. We are proud to collaborate on an endeavour that will make such a progressive impact on society,” explained Christoph Grainger-Herr, IWC CEO.

From its technical base in South Australia, the Airspeeder project has brought together some of the brightest minds in aviation, motor racing and performance automotive engineering from across the world. Charged with envisioning a better future, the diverse team of engineers, specialists and pilots are encouraged to think innovatively to push the boundaries of technical excellence, a philosophy which IWC also shares. The new partnership reflects this common purpose and will establish a knowledge exchange to prompt technological progress within the engineering 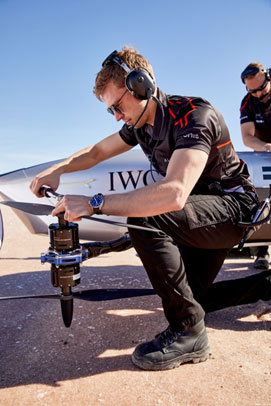 departments of both organisations. “Time and again, IWC has enabled dreams and nurtured innovation. Like us, they see beyond the known horizon towards something different, bolder and more inventive. This commitment to progress is something we also value, and we are delighted that the entire team at Schaffhausen believes in our vision. Whether the result is a beautifully designed watch or a revolutionary flying car, we all rely on human and technical endeavour to make truly impactful change through giant technical leaps. I can’t wait to see what we can achieve together,” added Airspeeder founder Matt Pearson.

Airspeeder developed its first small-scale prototype performance eVTOL in 2017 and has continued to finesse the design ever since through computer modelling and simulation, as well as extensive testing.

The newest vehicle, the Mk3, is the world’s first fully functional electric flying racing car. With an overall aesthetic reminiscent of classic 1950s sportscars combined with racing drones, the speeders feature an octocopter layout, airfoil-profiled rotor arms, cuttingedge carbon-fibre composites and the latest EV battery technology. New advances in safety are delivered through a suite of technologies and engineering elements never before seen on an eVTOL craft.

These innovations include LiDAR and Radar collision avoidance systems that create a ‘virtual force field’ around the craft to ensure close but ultimately safe racing. Designed for maximum performance and aerial agility, they move through the air with precision and pace. An entire grid of these remotely piloted Mk3s is currently being built by Airspeeder, ahead of this year’s competitive pilotless events. The Mk4 is expected to launch in 2022, before the inaugural crewed season gets underway. 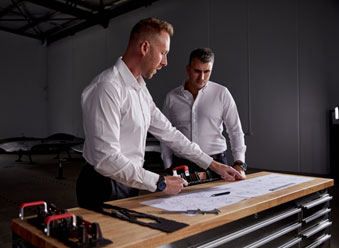 Airspeeder is the world’s first racing series for electric flying cars. Our mission will accelerate eVTOL (electric vertical take-off and landing) advanced aviation technology through intense sporting competition. This mobility revolution, underpinned by future tech, will transform urban air mobility (UAM), global logistics and even medical applications with a clean-air electric vehicle (EV) solution. Our racing multicopters are developed at our advanced aerospace engineering hub in Adelaide, South Australia by engineers drawn from elite motorsports, automotive, aviation and even FPV drone, electric plane, electric vehicle and passenger drone backgrounds. Airspeeder’s vision will deliver the most exciting and future-focused motorsport on the planet. Following an inaugural unmanned season, elite pilots will take to the skies to race prop-to-prop while navigating electronically governed racetracks in the skies above some of the most visually arresting scenery in the world.

In 1868, the American watchmaker and entrepreneur Florentine Ariosto Jones travelled from Boston to Switzerland and founded the ‘International Watch Company’ in Schaffhausen. His visionary dream was to combine advanced American manufacturing methods with the craftsmanship of Swiss watchmakers to make the best pocket watches of his time. In doing so, he not only laid the foundation for IWC’s unique engineering approach but also established the centralised production of mechanical watches in Switzerland.

Over its 150 year history, IWC Schaffhausen has developed a reputation for creating functional complications, especially chronographs and calendars, which are ingenious, robust, and easy for customers to use. A pioneer in the use of titanium and c eramics, IWC today specialises in highly engineered technical watch cases manufactured from advanced materials, such as titaniumaluminide and Ceratanium®. Preferring the principle of “form follows function” over decoration, the Swiss watch manufacturer’s timeless creations embody their owners’ dreams and ambitions as they journey through life. IWC sources materials responsibly and takes action to minimise its impact on the environment, creating intrinsically sustainable timepieces that are built to last for generations. The company prides itself in training its own future watchmakers and engineers, as well as offering an excellent working environment for all employees. IWC also partners with organisations that work globally to support children and young people.