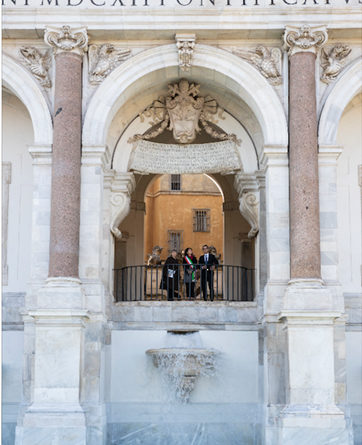 Italy’s water fountains are historic, with network of aqueducts that were built several hundred years ago to bring clean drinking water for the people. Beyond the functionality, they are also masterpieces of architecture, aesthetically designed and decorated with sculptors. Recently, the Italian luxury fashion house FENDI helped restore four important historical fountains, which were handed over to the public on November 26, 2019 in an official ceremony. The four fountains are Fontana dell’Acqua Paola also known as Il Fontanone (“The big fountain”)  at the Gianicolo or the Janiculum Hill; The Fontana dell’Acqua Felice, also called the Fountain of Moses in Piazza San Bernardo; Fontana del Peschiera in Piazzaledegli Eroi; and the new Acqua Vergine at the Pincio, in Viale Gabriele d’annunzio. The  Mayor of Rome Virginia Raggi, the President and CEO of the FENDI Maison, Serge Brunschwig, together with Rome’s Superintendent of Cultural Heritage, Maria Vittoria Marini Clarelli, inaugurated the conclusion of the works and the reopening to the public of the four fountains.

FENDI has set up the ‘FENDI for Fountains project’, as its contribution to the enhancement of the artistic heritage of the Eternal City and previously helpedin the restoration of the Trevi Fountain and now of the Complex of the Four Fountains. FENDI foot the entire cost of the project, € 280.000.Following a public  tender, the works were conducted by the firm Methodos by Valeria Mallia, specialized in the restoration of stone materials. The work started on May 29 with the Acqua Paola and Peschiera sites, followed by the Mosè and Ninfeodel Pincio in the subsequent months. The project was concluded within the stipulated deadline, and involved all surfaces which were washed and cleaned from biological patinas and calcareous encrusting. The damaged portion shave been strengthened and plastered where necessary. All basins have got waterproofing and inspection of electrical and water systems also done.

The Capitoline administration worked with the firm Areti, for the new LED lightening system as well as the reactivation of the water system. Just for the Fontana del Peschiera, the total cost was € 78.000. Of the many fountains in Rome, these four fountains from different times in history were identified because they are part of the monumental Roman aqueducts. Three of these date back to the Imperial times, while the fourth, the Peschiera one, from the modern age (1949), these are considered one of Europe’s greatest aqueducts.

Speaking at the inauguration Mayor Virginia Raggi said, “Today it’s a day of celebration for our City, that gives back to the Romans and to the tourists four important fountains of the Capital. Rome has always had an important relationship with its fountains and aqueducts, which not only dispense water, yet evoke its preciousness as a symbol of life and rebirth. Each one of these fountains has its own story and contributes, at the same time, telling the story of the city. The FENDI Maison, which I sincerely thank, and which has tied its name – among the others – to the Mosè, Peschiera, Ninfeodell’AcquaVergine and the marvellous ‘Fontanone’ of the Gianicolo fountains by financing this important extraordinary maintenance works of some of Rome’s most beautiful monuments, showing once more, on this occasion, their great love for our Capital. Finally, I would like to thank the technicians, the operators and the offices whom, with their attentive and competent work, created a healthy and positive synergy between the Public Administration and private companies that produced one of those excellent results that become, for Rome, and example of good practice”.

Serge Brunschwig, President and CEO of FENDI said, “We are proud of this renewed collaboration between public and private sectors which enabled, once again, to bring back to their original splendour the Gianicolo, Mosè, Ninfeo del Pincio and Peschiera fountains, which are accessible again to the Romans and to the tourists from the whole word. Rome is an integral part of the FENDI DNA and its artistic and cultural heritage is to be preserved for future generations.”

Nicknamed Fontanone (“The big fountain”) del Gianicolo, the Acqua Paola fountain was realised in 1610-1614 by Pope Paul V Borghese(1605-1621) as the terminus of the Traiano-Paolo aqueduct, coming from the Braccianolake and rebuilt a few years earlier by the same Pontiff. The fountain’s design, created by architects Giovanni Fontana and Flaminio Ponzio, takes inspiration and expands the model which had already been experimented a few decades before for the Mosè fountain, with evident references to the ancient triumphal arches. Reclaimed marbles from the Roman Forum and the Forum of Nervawere used for its construction, whilst the red and grey granite columns belonged to the ancient Constantinian basilica of Saint Peter. The current monumental basin was constructed at the end of the XVI century by architect Carlo Fontano. The garden at the back of the fountain was originally intended to host, by the wish of Pope Alexander VII Chigi (1655-1667), in its original and vaster extension, the Botanical Garden, which was moved in 1883 to the present site in Villa Corsinialla Lungara.

Damaged by the French cannons during the short Roman Republic of 1849, the fountain was firstly restored in 1859; additional restorations followed until the great one of 2002-2004, curated by the Sovrintendenza Capitolina. 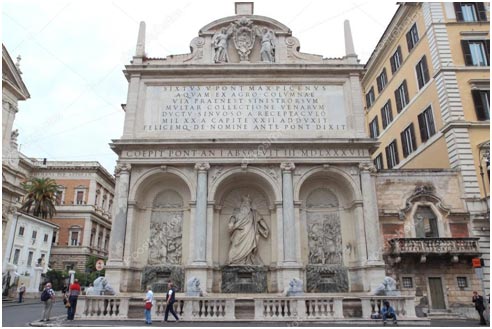 Built between 1586 and 1589, the Mosè fountain was designed by Domenico Fontana, by the wish of Pope Sisto V Peretti (1585-1590), as the terminus of the Felice aqueduct to bring water in the Quirinal and Viminale areas, as part of the extensive urban renewal plan of the Pontiff. The fountain was inaugurated after the first phase of the works, concluded on a provisional basis in 1587 – the date mentioned in the epigraph of the cornice.

Open questions concern the participation to the works of Giovanni Fontana (1540-1614), brother of Domenico, the Pope’s architect, and the attribution of the sculptural pieces to various Sistine artists that took part in the works. The Mosè statue, realized by Prospero Antichi and Leonardo Sormani, was the first one to be placed, in May 1588. The final marble version of the relief on the left depicting Aronnecheguidailpopoloebreo a dissetarsi was realized by Giovanni Battista della Porta, whilst Pietro Paolo Olivieri and FlaminioVacca worked between 1588 and 1589 on the relief on the right, depicting Giosuècheguidaisoldati verso il Mar Rosso. As all Sistine realizations, the fountain is made mostly with reclaimed materials, as well as high-quality ones. The original Egyptian lions were replaced by four new ones in Bardiglio marble during the restoration of 1850-1851, directed by sculptor AdamoTadolini. The cliffs of the niches are realized in precious Cipollino marble, while the panels are in stucco. 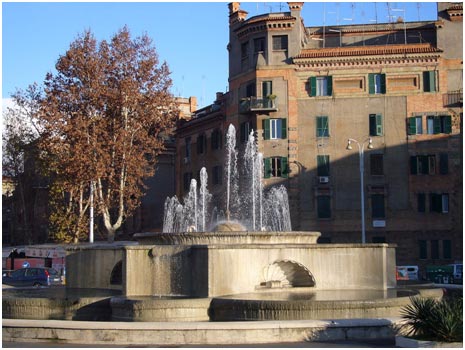 The fountain in Piazzaledegli Eroi was constructed in 1949 as a temporary fountain of the aqueduct of Peschiera, despite the economic restrictions of the post war period. The construction of the aqueduct, which had already been planned since the junta Nathan (1907-1913) to strengthen the water supply of the city, lasted more than forty years because of the war. In 1948, the water of Peschiera from the Rieti region sources finally arrived in Rome. On that occasion, the Municipal Council proposed to celebrate the event in PiazzaledegliEroiwith a special tag also in memory of the fallen technicians and workers. From 1949, in a short amount of time, the proposal of a fountain became reality, realized by ACEA technician GiuseppePrimieri on the model of the ancient one. Inspired by the first version of the Najadi fountain – Acqua Pia Marcia fountain – this fountain features a large circular basin with an octagonal mixtilinear structure crowned by a centrally poly-lobed tank, surmounted by a smaller tank. The monumental effect was granted, rather than by the architectonical decorations, by the play of water: a very high central water gush crowned by lower gushes in the superior basin, large water jets that pass from the superior tanks to the lower ones, ‘veil’ effect waterfalls in the four small semi-circular tanks and water sprinkles from the niches decorated as valve shells. The fountain was activated on October 27, 1949, at the presence of The President of the Italian Republic Luigi Einaudi, with a ceremony inspired to the traditional inaugurations of the Roman aqueducts, as witnessed in the image of the President drinking water from the Peschiera fountain with the same glass used eighty years before by Pio IX for the temporary Acqua Pia Marcia fountain. 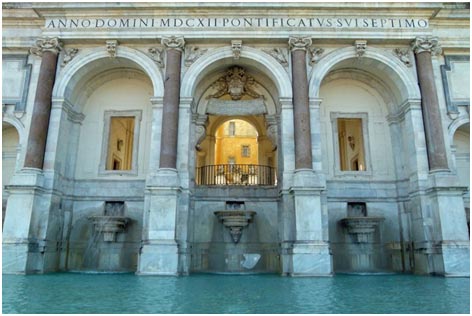 The fountain-nymph, installed as the fountain of the new Acquedotto Vergine, overlooks Piazza del Popolo from the Pincio hill, whose famous panoramic terrace is sustained by the three large arches of the loggia that hosts the fountain.

The first idea of a loggia crowning the lift from Piazza del Popolo to the Pincio garden was presented by French architect Louis-Martin Berthault for the projects of the Passeggiatadel Pincio in 1813, during the dominion of Napoleon over the Papal State (1809-14). With the fall of the French government in 1814 and the return of the Pope, the works were set up with new economic criteria and were entrusted to Giuseppe Valadier. The construction of the final loggia was concluded in 1834 to complete the systemization works of the hill’s prospect with the new road that connected Trinitàdei Monti with the below Piazza del Popolo. Starting from the 1930s, the Governorate started the realization works of the new Vergine aqueduct, for the benefit of the areas under construction of Prati di Castello, Valle dell’Inferno, Piazza d’Armi and Flaminio.

In 1936, it was decided to realize the fountain, under the Pincio loggia, to complete the new part of the aqueduct, designed by architect Raffaele de Vico.

On this occasion, the equestrian monument of Vittorio Emanuele II – positioned there in 1877 – was moved to the current site, in the garden of the Historical Museum of Infantry, providing the overall appearance that we can still appreciate nowadays.