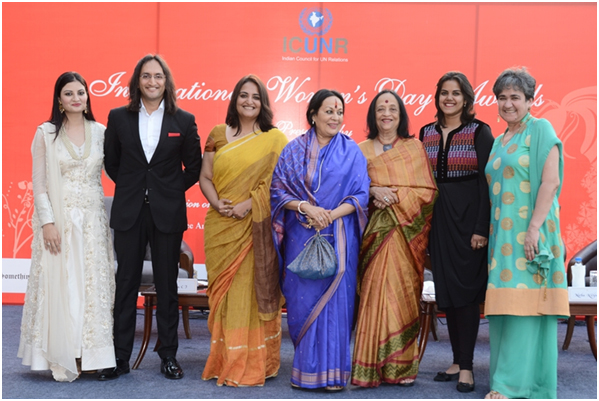 8th March every year is observed worldwide as International Women’s Day keeping in mind the political and human rights theme designated by the United Nations to celebrate the social, economic, cultural and political achievement of women. The event in the capital celebrated Women’s Day by awarding women achievers from different genres of life who have set an example for women across the globe by gaining expertise in their respective fields, while at the same time providing a solid platform for people willing to join a similar profession.The event was organized in partnership with brands like UK Fostering, House of Design and CTC Plaza with Wikka, Hudson Canola oil, Gifts by Meeta and Delicious Me as Gift Sponsors. Mojarto(an NDTV venture) also presented an online show ‘Feminine Unbound’ with works by leading women artists, recommended by AnjolieEla Menon.

The  Award presentation was preceded by a Panel discussion on ‘Being a woman in the sphere of Art & Culture in India’ with Padma Vibhushan Dr. SonalMansingh, Padma Shree AnjolieEla Menon, SonalKalra & NehaKirpal and was  moderated by Papa CJ. Smt. Asha Devi, Mother of Nirbhaya led the Pledge to empower 1 Disadvantaged girl, which was taken by all present at the event.

MrsRatanKaul is a very well-known figure in New Delhi’s cultural, social, diplomatic, business & political circles, an environmental activist and a writer. She has been recognized and awarded by many national and international organizations for her contribution and work as an activist. LeherSethi is an entrepreneur, avid reader, writer and co-founder of Literature Corner.

Commenting on this occasion MrsRatanKaulsaid , “This celebration recognizes and praises the indomitable spirit and courage shown by women across fields who have excelled and achieved their aim by fighting all the odds. Our platform is enthused to recognize achievers by making an effort to keep that spirit up by rewarding them.”

LeherSethi, the co-host of the event said, “I feel that womanhood needs to be celebrated more than anything else in today’s day and age. Celebrating and awarding proficient women through the platform of the ICUNR International Women’s Day Awards is just another opportunity to appreciate the remarkable contribution of women to our society.” The event took place at Nandiya Gardens at Hotel Maurya.

The event was also followed by felicitation of Life coach Acharya Anita & the past awardees that walked the ramp in designer PreetiGhai’s Creations.

The Guests of the Honour for the evening were