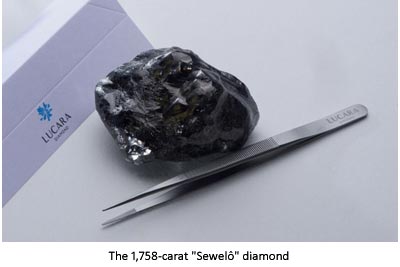 The luxury retail giant Louis Vuitton has bought the 1,758-carat ‘Sewelô’ diamond, for an undisclosed price, in a deal with Canadian mining company Lucara Diamond Corp. The ‘Sewelô’, which means ‘rare find’ in the local language Setswana, was found in the Karowe mine in Botswana in April 2019. It is the second-largest diamond in history, after the Cullinan at 3,106 carats, mined in South Africa in 1905. With this acquisition, Louis Vuitton is in sync with its parent company LVMH which acquired Tiffany for $16.2 billion, putting the retailer in a pole position for its business in fine jewelry.

In a press release issued by Lucara, the arrangement between Lucara and Louis Vuitton is that the diamond will be cut and polished through a partnership with the Antwerp diamond manufacturer HB Company. As per the deal, Lucara will keep a 50-percent stake in the polished stones produced from the Sewelô. And 5% of the proceeds from retail sales of the diamonds will fund Lucara’s “community-based initiatives” in Botswana, where the company has discovered several large gems. Eira Thomas, CEO Lucara said, “The arrangement will see the ‘Sewelo’ turn into a collection of fine jewelry that will commemorate this extraordinary discovery and contribute direct benefits to our local communities of interest in Botswana”.

Reportedly, ‘Sewelo’ is a low quality diamond going by the black colour of the rough. In 2015, Lucara mined the 1,109-carat “Lesedi La Rona” diamond, which it was able to sell after two years in September 2017 to Graff Diamonds for $53 million.The 3,106-carat Cullinan diamond, unearthed in South Africa 115 years ago in 1905, was split into nine major stones, two of which are part of the British Crown Jewels.