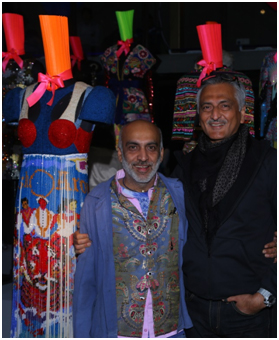 Manish Arora celebrated 10 years of his shows at Paris Fashion Week with a retrospective installation of all his favorite garments from each of the shows across the 10 years and 20 seasons, at his new creative studio at Dhan Mill Compound Chhatarpur.

Speaking of the decade long association, the designer said “I am honored to have been part of the prestigious Paris Fashion Week as the only Indian designer showcasing since the last ten years. The platform is an important one as it has given me the opportunity to represent India in its pure vibrancy.”

The designer’s decade in Paris has been an illustrious one—from presenting his unique Technicolor vision to the fashion world, to helming Paco Rabanne. Celebrating the wonderful history of Indian civilization, Manish Arora has seamlessly fused traditional craftsmanship with innovative modern construct and fit. For over two decades, the Manish Arora experience has been rooted in Indian design. In 2007, his SS’08 collection debuted at Paris Fashion Week to great success, putting the Indian sub-continent on the global map. In 2017, he celebrated his 10th anniversary of showcasing at PFW with a magnificently fitting show at the Grand Palais that was an interplay of colours, quirk and everything quintessentially Manish.

Speaking of his new creative design studio in Chhatarpur he said “The space will be my design studio, epitomizing happiness, joy, and glorious celebrations, illustrating what makes life truly beautiful.”

Having dominated the European fashion scene, he is now looking East to expand his eponymous label. With strong sales in China, he has already opened two stores in Shanghai and Suzhou in December 2017, and plans to open three more this year, consolidating his place as a formidable force in fashion.