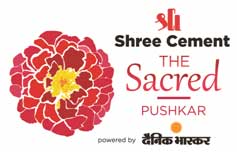 Teamwork Arts announced the upcoming second edition of their cultural enterprise, The Sacred, Pushkar 2016, at a colorful ceremony held at the Bikaner House. The festival opens from the 10th to 11th of December 2016. Mr Sanjoy Roy, Managing director of Teamwork talked about the awaiting treasures of the festival.The musical performances by Jean-Paul Poletti&The Men’s choir of Sartene, along with the devotional alaap and chants by Sukriti Sen enthralled the audience. Post this, the party shifted to the courtyard where the South African band AAFRIND regaled the audience with Indo-Western fusion music. The evening was well attended.

About The Sacred, Pushkar festival