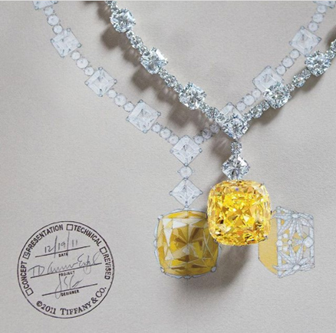 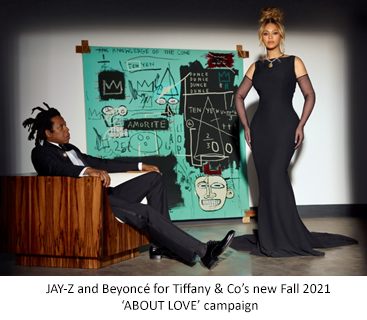 Acturally, the pre-launch image of Tiffany & Co’s new Fall 2021 ‘ABOUT LOVE’ campaign, scheduled for early September,  is an ode to several artists. The power couple from the world of music, Beyoncé and JAY-Z  need no introduction. It is the first time they have appeared in a campaign together. The other prominent presence here is the artwork in the background by famous American artist Jean-Michel Basquiet. This 72” X 72”, acrylic on canvas titled ‘Equals Pi’ was painted in 1982, when Basquiet was just 22 years old. As part of a private collection from its creation until now, this campaign marks the work of art’s first public appearance, propelling Tiffany’s long-standing tradition of working with New York creatives forward.  It was in the same year that another of Basquiet’s untitled paintings, depicting a skull, made a world-record of sorts in May 2017 at a Sotheby’s auction, where it sold for a whopping $110.5 million.

Mason Poole, a celebrated photographer who has shot this campaign, appears to have worked in more details of Basquiet in the composition of the photograph here. JAY-Z in a black suit, reclining in a chair with left leg folded seems like a throwback to the pictuer of Jean-Michel Basquiet on the cover of The New York Times Magazine in 1985. JAY-Z’s dreadlocks too remind of an Andy Warhol painting of Basquiet made in 1982.

The statuesque Beyoncé wears the Tiffany necklace in platinum featuring the famous 128.54-carat fancy yellow diamond with 16 cushion-cut diamonds of over 80 total carats and 46 round brilliant diamonds of over 15 total carats. This was created by the French jewelry designer Jean Michel Schlumberger who created many significant pieces for Tiffany & Co. in his lifetime.  He also created the Bird cuff links in platinum and 18k yellow gold with diamonds, worn by JAY-Z here.

Though not very clearly visible here, the other Tiffany jewelry worn by Beyoncé and JAY-Z  here are – a ring in platinum and 18k yellow gold with an over 22-carat cut-cornered rectangular mixed-cut fancy intense yellow diamond and round brilliant white diamonds; the Charles Tiffany Setting engagement ring in platinum with a 2.86-carat emerald-cut center diamond; JAY-Z’s ring in 18k yellow gold with a cushion-cut esteemed Sri Lankan sapphire of over 4 carats.

Please note, that these jewelry are custom design for campaign, not for sale. New design to launch in 2022.

The copyright of the art is © Estate of Jean-Michel Basquiat. Licensed by Artestar, New York