The popular literary event, Jaipur Literature Festival (JLF) is an important event in the city’s calendar. In its 11th year, JLF is back on schedule, overlapping the Republic Day holidays, from the 25th to 29th January, at Diggi Palace. It is to the credit of the people behind the event, Sanjoy Roy of Teamwork, Namita Gokhale, William Dalrypmle, who struck all the right notes and made timely course-corrections, turning it into a mega global event. Within this space for writers and editors, is also the additional event for publishers, Book Mark, from 24th – 28th January.

Growing exponentially year on, in terms of visitors, participants and outreach, this year’s edition has a series of 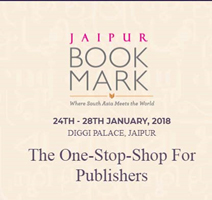 overlapping sessions, famous international and national speakers, several book launches. Some of the names in the long list of speakers are – Amish Tripathy, acclaimed as ‘India’s first literary pop star’ having authored the famous Shiva Trilogy, the Ram Chandra series and more. Alan Friedman, Writer, Journalist, Filmmaker & Broadcaster, who is a four-time winner of the British Press Award, and his new documentary, My Way: The Rise and Fall of Silvio Berlusconi, is currently available on Netflix in 190 countries. Anurag Kashyap, Director, Producer, Screenwriter & Actor; Hamid Karzai, Former President of Afghanistan; Kiran Mazumdar-Shaw, writer and pioneering biotech entrepreneur, who is the Chairperson and Managing Director of Biocon; the Italian Ambassador to India and Nepal H.E.Lorenzo Angeloni’ Writer & Diplomat; Phejin Konyak, Writer and great granddaughter of a tattooed head-hunter, Ahon, who was a prominent member of Nagaland’s Konyak tribe. He was one of the first interpreters to travel with the British ethnographer JH Hutton during his writing of the Diaries of Two Tours in the Naga Hills in 1923; Sudha Murty in conversation with Puneeta Roy.

Helen Fielding, writer of the book Bridget Jones’ Diaries, with a movie of the same name, will be in conversation with Meru Gokhale. Shashi Tharoor, Mira Nair, fashion designer JJ Vallaya, Shobha Dey are just some of the other famous regulars at the JLF. The closing session promises to be immensely interesting with a debate topic  #MeToo: Do Men Still Have It Too Easy? And the powerful persons debating are Pinky Anand, designated Senior Advocate and the Additional Solicitor General of India, Vinod Duar, Bee Rowlatt, moderated by Sanjoy K.Roy.