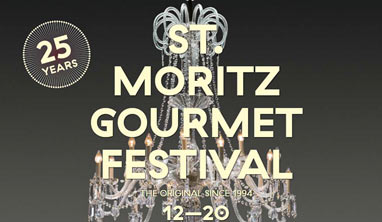 The cold wintery vistas of are once again the backdrop to the St. Moritz Gourmet Festival for the 25th time. The annual celebration of food will have some of the biggest names amongst the international Chefs, skiing up to the snow bound Swiss resorts to enthrall the visitors with their culinary magic. Scheduled from 12th – 20th January, 2018, the festival will this time premier a new format, enabling the visitor to enhance their cookery skills with guidance from world-class chefs, besides taking part in a lineup of expansive dinners and celebratory parties.

To look out for are the Gourmet Dinners in various high-end hotels, involving ten international top guest chefs, who will cook a multi-course or à la carte menu. The other amazing activity, highly recommended is the ‘Kitchen Party’, where a guest will be welcomed into the kitchen by some of the top chefs, to test their creations straight off the wok or pan. There’s more.

Please note that the events are ticketed and it is important to book in advance. For instance, the first event of the festival the Grand Julius Baer Opening, is already sold out. Visit the festival website for calendar information.