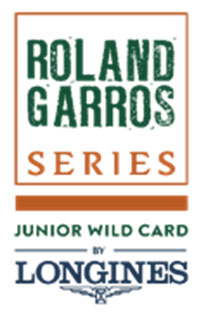 The premier clay court tennis tournament organized by the French Tennis Federation (FTA), The French Open, was recently renamed Roland-Garros. The fourth India edition of the Roland-Garros Junior Wild-Card Competition by Longines was a joint event organized by the FTA in association with All India Tennis Association (AITA), to promote young talent and clay-court tennis in India

The highlight of the event was the showcasing of the original trophy of Men’s Single and Women’s Single at the Longines boutique located in Connaught Place Delhi. Ace tennis player Yuki Bhambri who will be representing India at Roland Garros this year paid a special visit to Longines Boutique to witness this special display. He was presented with a Conquest 1/100th Roland Garros timepiece on this occasion. 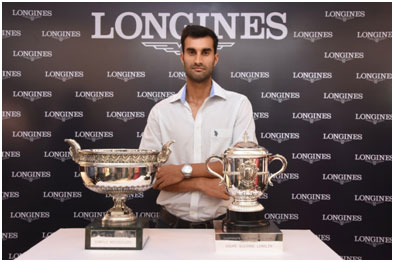 2007, Longines supports this internationally acclaimed event. As a tribute to the strong relationship that it has developed with the Parisian tournament, Longines decided to launch an exclusive edition watch for the Conquest 1/100th Roland Garros. Touches of orange on the hands, the dial or the flange indexes subtly hint at the iconic clay of the French Open courts, while the case back is engraved with the logo of Roland Garros. Conquest 1/100th Roland Garros timepiece was presented to tennis player Yuki Bhambri

NB: The Official Watch of Roland Garros 2018 is a Conquest V.H.P. “Very High Precision” model, which represents a new achievement in the field of quartz, combining great precision, high technicality and a sporty look. As a tribute to the strong relationship that it has developed with the Parisian tournament, the winged hourglass brand decided to launch an exclusive edition: the Conquest 1/100th Roland Garros. Touches of orange on the hands, the dial or the 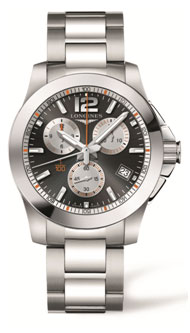 flange indexes subtly hint at the iconic clay of the French Open courts, while the case back is engraved with the logo of Roland Garros.

About Roland-Garros
Both committed sports fans and the general public alike have come to love Roland-Garros. Some 455 621 spectators flocked to the highly prestigious French Open in 2016, and the tournament was also broadcast on over 220 territories across the world, making it an event of truly global significance. Roland-Garros is run by the French Tennis Federation and held every year at the Porte d’Auteuil in Paris. It is the only Grand Slam to be played on clay – one of the oldest and most noble surfaces in the history of tennis. 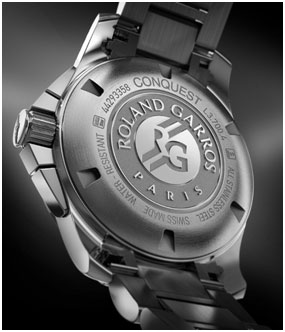 About Longines
Based in Saint-Imier, Switzerland, since 1832, Longines’ has a wealth of experience keeping time at world championship events, and as a long-term partner of many international federations, Longines has weaved solid and long-lasting bonds with the world of sport. Longines is a member of Swatch Group S.A., the world’s leading manufacturer of timekeeping products. The brand is established in more than 150 countries.